Electrosonic Provides AV Services for Museum of the American Revolution 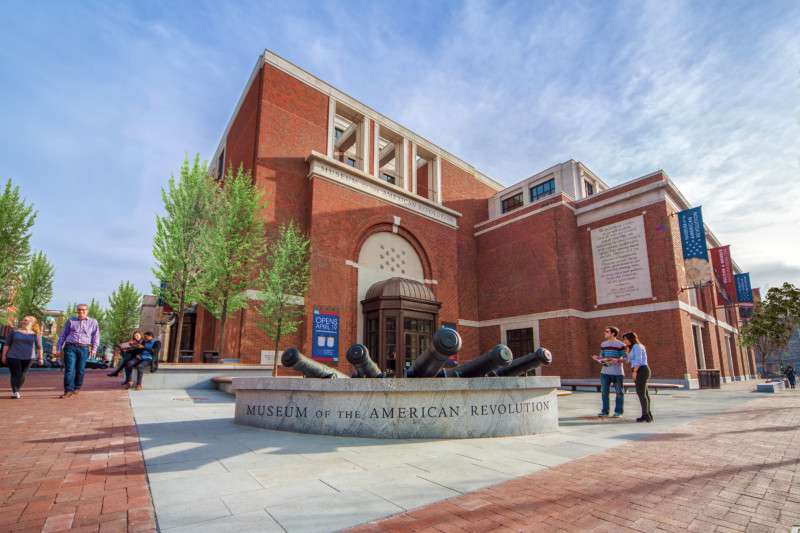 The Museum of the American Revolution recently opened just a few blocks from Philadelphia’s historic Independence Hall. The new red brick building boasts 32,000 square feet of galleries and theaters winding around a central atrium.  Immersive exhibits, engaging films and an iconic collection of artifacts bring to life the events, people and

ideals of the nation’s founding and engage visitors in the history and continuing relevance of the American Revolution.

Electrosonic was charged with the audiovisual design, engineering, product procurement, installation and commissioning for the museum, which includes multiple theaters and  exhibit spaces.  Electrosonic was selected by Dan Bosin Associates, a project management and architectural firm representing the museum, with whom they had worked on the Edward M. Kennedy Institute in Boston.  Electrosonic also partnered with M. Gitlin Co., Inc., union labor provider, and Intech, the general contractor, on the project.

“This was the friendliest construction site I have ever been on – and that applies to all the trades,” says Electrosonic Project Manager Kevin Mayfield.  “All of us were challenged by the size and scope of the museum and the complex spaces, but it was all about the team and having the right team members was essential.  Everyone was not only good at what they do but very collaborative too – a rare combination!”

The complete design-to-build project began with Electrosonic’s Andrew Kidd who was the Executive Consultant for the project. “Even beyond the design phase, Andrew continued to play an active role when the project passed to operations for the build,” Mayfield explains.  “He had input throughout the process and maintained the original exhibit team’s design intent.”

Visitors begin their tour of the museum in the Lenfest Meyer Theater with the 15-minute orientation film, “Revolution.”  The sweeping film, shown throughout the day, explores the origins, experiences and ongoing legacy of the American Revolution and sets the stage for the core exhibition.

When the Lenfest Meyer Theater is not showing the main “Revolution” film, the theater can also act as a presentation and special event space.  Electrosonic furnished a roll-out podium and mic, AMX touchscreen control and a Christie DWU-851Q projector for those occasions.

After viewing the orientation film visitors head up the grand staircase to begin their exploration of the origins of the American Revolution, the fight for Independence and the on-going legacies of the Revolution. 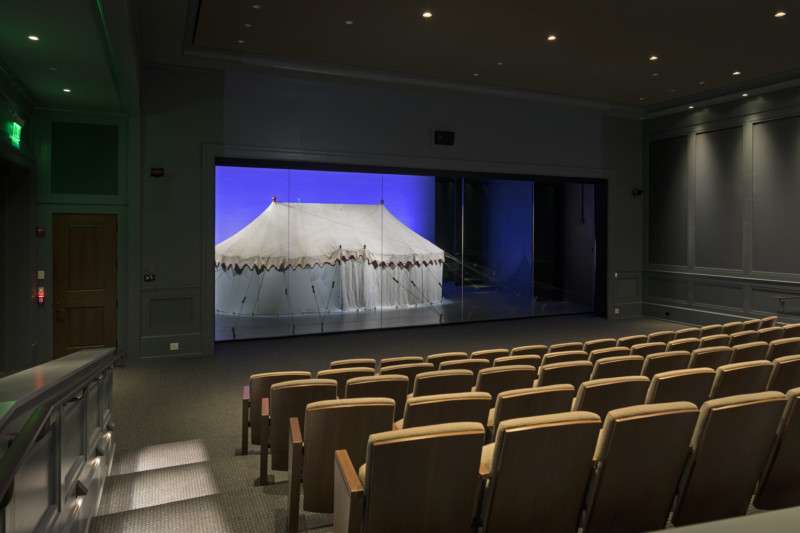 The “biggest and most challenging” exhibit for Electrosonic, according to Mayfield, is General Washington’s original sleeping and office tent, which was carefully preserved by generations of Martha Washington’s descendants and previously housed at Valley Forge.  The tent is now presented as part of a unique theater experience.

Visitors enter the room to watch a front-projected film on a screen that tells the story of the tent’s remarkable journey from the battlefield to the present day. When the lights slowly come up, the screen lifts to show a scrim, which becomes a new projection surface for more imagery.  Then, the scrim lifts to reveal Washington’s tent housed behind protective glass.  Projections show shadows in the tent, as if Washington and his colleagues were walking around inside; landscapes and weather are projected onto the back wall cyclorama.

Electrosonic provided a custom Gerriets three roller screen system, 34 feet long and made of carbon fiber, which had to fit a very tight space inside the proscenium.  MetalMaster Manufacturing in Orlando designed and fabricated custom brackets to stack and offset the screens.

“The installation and commissioning were done with a stand-in tent so we could figure out everything without fear of damaging Washington’s real tent,” says Mayfield.  “We had to ensure that the amount of light from the projectors on the tent would not further age the tent.  Once the real tent was brought in, no one will enter that space unless the equipment requires servicing.”

Interactives and a Privateer Ship

Interactive exhibits can be found throughout the galleries.  In a “Posters of Protest” exhibit, next to a life-size reproduction of the famed Boston Liberty Tree, five side-by-side Planar monitors, in portrait mode and driven by Planar videowall processors, are fed by a custom computer with five separate outputs. Motion sensors under each monitor activate as visitors approach; visitors touch a custom PQ Labs touch overlay, with 32 active touch points, to trigger stories of key moments during the decade of resistance that led up to the war for each monitor

One of the most fun exhibits is a replica privateer Ship that visitors can board.  Privateers were privately-owned vessels licensed by Congress or state governments to attack British ships and disrupt trade.  Electrosonic provided audio for this exhibit.  “There are custom Acoustic Enhancement activated sound panels hidden in crates, overhead in the ship and in the ship’s walls,” explains Mayfield.  “Each has its own point source audio – birds, sounds of loading cargo, people on the dock.  It’s subtle but very powerful, an exhibit we’re very proud of.”

About halfway through the galleries is the small “Battlefield Theater,” which shows a filmed re-enactment of the 1777 Battle of Brandywine at Chadds Ford, Pennsylvania.  Visitors walk up to a waist-high wall to view a diorama of the battlefield with a screen behind it.  Two Christie DWU-851Q edge-blend projectors display the video feed from the 7th Sense server.  Strobe lights, ‘gunpowder’ smoke and a shaking floor add 4D elements to the experience. Electrosonic installed three Tannoy screen speakers, six Tannoy surrounds, two BagEnd subwoofers and four Aurasound floor shakers, the latter providing the feel of marching soldiers.  “It’s an extremely immersive environment in a fairly small space,” Mayfield says.

In the Oneida Nation Gallery visitors can stand among life-size replicas of members of the Oneida Indian Nation.  Motion sensors track the visitors’ approach and stories of the intense debate – to ally with the British or join the revolutionary forces – are played back.  A curved screen covering three sides of the room shows video imagery from four overhead Christie DWU-851Q projectors in one seamless, edge-blended display.

Electrosonic outfitted a small circular room with three overhead Digital Projection 30sx+XB dVision projectors to show New York City crowds tearing down a giant statue of King George III on horseback, after the first public reading of the Declaration of Independence to Washington’s Army.  The room’s walls serve as the projection surface.  This space and the Oneida Nation Gallery use Scalable Designs Auto Alignment software on 7th Sense servers to automatically align the projectors.

The final galleries are dedicated to the new republic, the birth of the Constitution and Bill of Rights and the challenges faced by the young nation at the end of the eighteenth century.

Exhibit control throughout the museum is provided by Medialon; AMX systems serve as the touchscreen interfaces.

Donna Lawrence Productions and BlueCadet were the content providers.

Joe Kleimanhttp://wwww.themedreality.com
Raised in San Diego on theme parks, zoos, and IMAX films, InPark's Senior Correspondent Joe Kleiman would expand his childhood loves into two decades as a projectionist and theater director within the giant screen industry. In addition to his work in commercial and museum operations, Joe has volunteered his time to animal husbandry at leading facilities in California and Texas and has played a leading management role for a number of performing arts companies. Joe previously served as News Editor and has remained a contributing author to InPark Magazine since 2011. HIs writing has also appeared in Sound & Communications, LF Examiner, Jim Hill Media, The Planetarian, Behind the Thrills, and MiceChat His blog, ThemedReality.com takes an unconventional look at the attractions industry. Follow on twitter @ThemesRenewed Joe lives in Sacramento, California with his wife, dog, and a ghost.
Share
Facebook
Twitter
Linkedin
Email
Print
WhatsApp
Pinterest
ReddIt
Tumblr
Previous article7thSense Design Named Key Technology Supplier for Dubai Parks and Resorts
Next articleHong Kong Disneyland to Transform Buzz Lightyear Attraction in Preparation for MARVEL Themed Land