Electrosonic Keeps the Birthplace of Country Music Museum in Tune 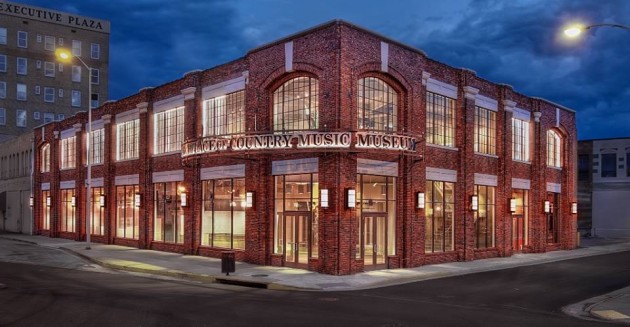 [quote]Optimizing the sonic environment throughout the museum was the goal, whether in the theaters or individual exhibits.” — Steve Haas, President SH Acoustics[/quote]

Los Angeles (September 30, 2014) – Straddling the Virginia and Tennessee state lines, the town of Bristol just opened the Birthplace of Country Music Museum, an affiliate of the Smithsonian Institution, featuring audio and video systems provided by Electrosonic.

The new museum celebrates the historic 1927 Bristol Sessions, which are considered the origin of modern country music. Held by the Victor Talking Machine Company in a local hat warehouse, the sessions were made possible by the advent of portable audio recording technology. Nineteen performers traveled to what was then the largest urban area in the Appalachians to raise their voices in song; the sessions marked the commercial debuts of the legendary Jimmie Rodgers and the Carter family.

The 24,000-square foot Birthplace of Country Music Museum uses multiple theater experiences, interactives and artifact displays, to tell the story of the Bristol Sessions and their far-reaching influence. The museum is in a vintage building that formerly housed a truck dealership; over a period of years, it was gutted and retrofitted to be true to the era of the Bristol Sessions. 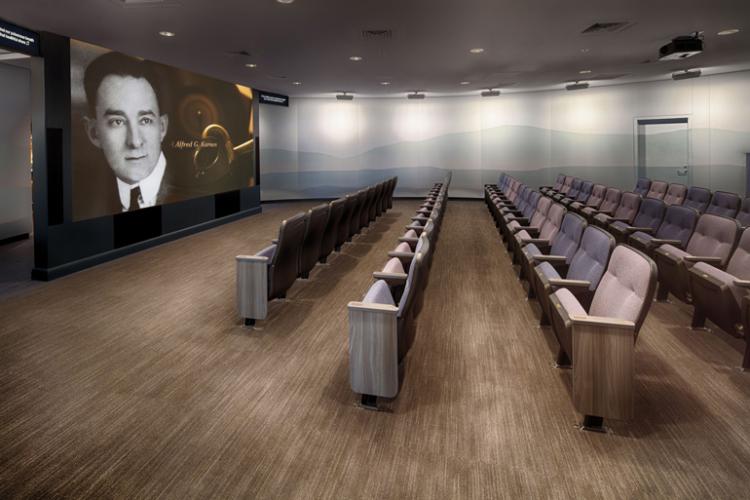 Electrosonic was brought on board the project in its early stages by Washington, D.C.-based Hillmann & Carr, which produced the museum’s video content and handled interactive programming. Electrosonic’s Design Consulting team worked with Joseph Nicholson of studioMUSarx in Philadelphia on the initial exhibit design. Electrosonic’s Orlando office provided the subsequent AV systems and support for the facility.

“There were a number of challenges to working in a historically significant building,” says Electrosonic project manager Tim Wilson.

Chief among them – and critical to a music-themed museum – were the issues concerning sound.  Steve Haas, president of SH Acoustics in Milford, Connecticut, served as the acoustic and audio consultant to Electrosonic and was a key contributor to the project’s audio design and calibration. “We had to resolve acoustically challenging hard surfaces and create the highest quality sound experience for visitors,” he says. 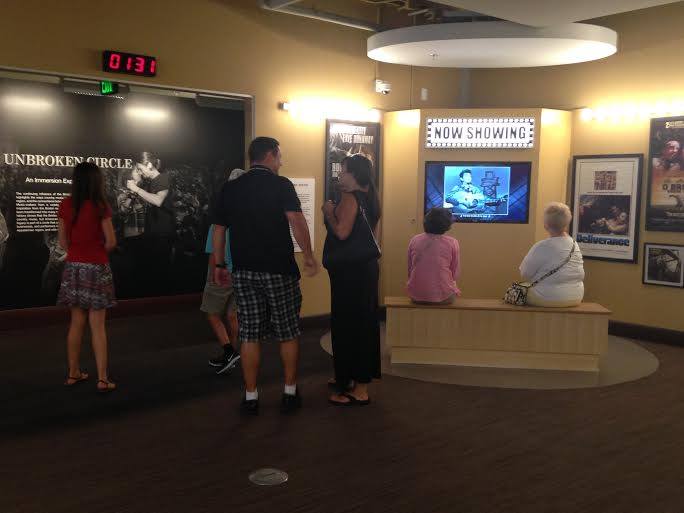 Visitors to the museum enjoy five theaters, four of which feature equipment from Electrosonic. The largest of them, the Orientation Theater, has a holding area styled like a train depot. Visitors hear associated sound effects and historic music clips through Acoustic Enhancements’ activated sound panels built into the depot walls while they wait to gain admittance to the theater; when they hear a train’s air brakes, the theater doors open and they take a seat to watch the video, “Bound to Bristol,” about the musical heritage of the Bristol Sessions. The Orientation Theater is outfitted with an InFocus projector, Renkus-Heinz speakers, Bag End subwoofers and activated sound panels by Acoustic Enhancements. A pair of NEC monitors above the walkways provides closed captioning.

The small Greasy Strings Theater displays a looped video exploring the philosophy and musical techniques behind the sessions. It has a BenQ projector and Innovox and Tannoy speakers. The Chapel has a few church pews where visitors can rest and watch a video about local gospel groups and how faith has shaped music. It has a BenQ projector, Tannoy speakers and four Acoustic Enhancements activated sound panels built into the pews. The Orientation Theater, Greasy Strings and the Chapel all have Screen Goo projection surfaces on their walls. Their video sources are Alcorn McBride DVM8500 digital video machines.

A stop at the Immersion Theater comes later in the tour. Its video focuses on making visitors part of the unbroken circle of country music and includes clips of many different artists performing “Will the Circle Be Unbroken” – from Jimmie Rodgers to Lynyrd Skynyrd. This theater has a custom Da-Lite perforated, curved screen, three blended BenQ projectors, a Dataton WATCHOUT video source, Tannoy speakers and Bag End subs – and room to dance. The walls are lined with murals showing crowds of appreciative country music fans at the annual Rhythm & Roots Reunion festival in Bristol. 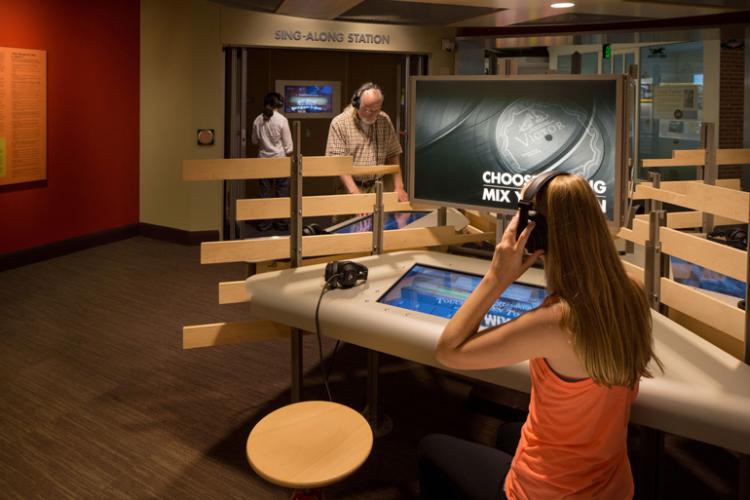 Throughout the museum, a number of interactives equipped with 32-inch ELO touch screens engage visitors in various aspects of the Bristol Sessions and country music heritage. Interactives dubbed “Way Back Machines” enable visitors to scroll through photographs showing Bristol over the years; four “Mixing Stations” allow them to change the mix on assorted tracks from the sessions. Two “Bristol Remastered” interactives, with Brown Innovations focused beam speakers, showcase a number of session tunes covered by contemporary artists. An interactive recording booth invites visitors to sing along in their own version of the famous Bristol Sessions, and “Send a Postcard” lets them choose a digital postcard design to email to family and friends.

Bristol-born Tennessee Ernie Ford gets a video kiosk driven by an Alcorn McBride DVM8500 with overhead speakers. The “Rediscovered/Reinvented” video, displayed on a 46-inch monitor, shows how movies and media integrate country music today. It is also fed by an Alcorn McBride digital video machine.

The museum has provided space for a working internal radio station, too. Visitors can look through picture windows to the audio booth, which features a vintage radio control room and studio equipped with a 1940s Raytheon console from a Bristol radio station that has been retrofitted to convert analog to digital signals. The FCC has granted a low power FM license, and the studio will soon begin broadcasting WBCM, Birthplace of Country Music Radio. Electrosonic provided the interactive outside the windows where visitors can tune into four pre-recorded radio shows if the radio station is not broadcasting. Audio playback is provided by a QSC Q-Sys system.

Electrosonic built three control rooms on the second floor of the museum, which are connected with a fiber network. Empty racks have been provided to accommodate future expansion in the already limited space. Museum staff maintains all of the audio and video equipment. 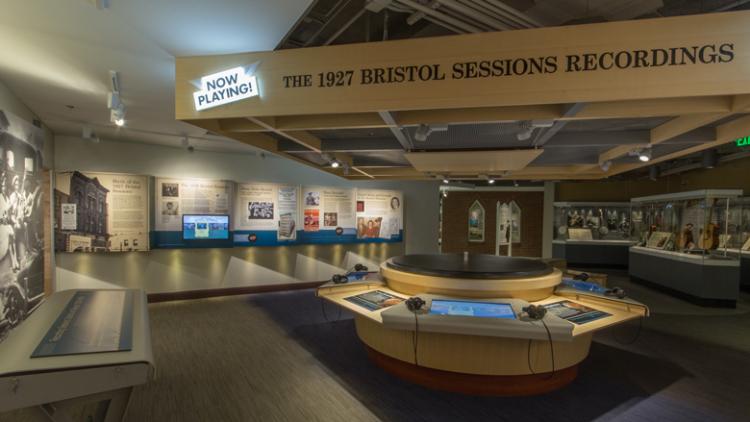 “Everything looks very, very good and sounds excellent,” says Wilson. “The Birthplace of Country Music is a very cool place to visit, and the people there are wonderful. They really believe in the product and have done a great job showing the full spectrum of country music from the 1927 sessions to today.”

Dr. Jessica Turner, the museum’s director and head curator, concluded, “It was important to us, as a music museum, to have the highest quality sound and media experiences. This is exactly what the group from Electrosonic delivered. I was impressed that the whole team worked with us to troubleshoot problems to find innovative solutions, often going above and beyond to provide expertise and professionalism. I was sad when the installation was complete and we would no longer be working together.”

Burwil was the general contractor for the museum.

Joe Kleimanhttp://wwww.themedreality.com
Raised in San Diego on theme parks, zoos, and IMAX films, InPark's Senior Correspondent Joe Kleiman would expand his childhood loves into two decades as a projectionist and theater director within the giant screen industry. In addition to his work in commercial and museum operations, Joe has volunteered his time to animal husbandry at leading facilities in California and Texas and has played a leading management role for a number of performing arts companies. Joe previously served as News Editor and has remained a contributing author to InPark Magazine since 2011. HIs writing has also appeared in Sound & Communications, LF Examiner, Jim Hill Media, The Planetarian, Behind the Thrills, and MiceChat His blog, ThemedReality.com takes an unconventional look at the attractions industry. Follow on twitter @ThemesRenewed Joe lives in Sacramento, California with his wife, dog, and a ghost.
Share
Facebook
Twitter
Linkedin
Email
Print
WhatsApp
Pinterest
ReddIt
Tumblr
Previous articleGoddard Group Sales Executive Mardy Ma Lands Role in Major International Television Production
Next articleSATE ’14 opens in Sarasota