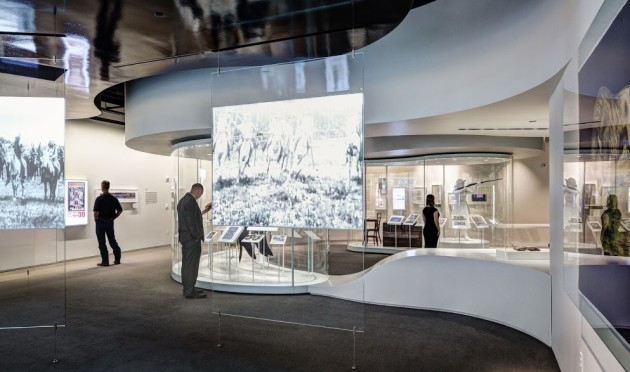 Los Angeles, CA, USA (December 16, 2015) – Electrosonic recently provided audio-visual equipment and integration services for the National Cowgirl Museum and Hall of Fame when it remodeled its first-floor gallery and added a stunning interactive mobile in the Grand Rotunda. The additions are part of a two-phase renovation of the museum’s galleries and public spaces.

Located in Fort Worth, Texas, the National Cowgirl Museum and Hall of Fame is the only museum in the world dedicated to honoring women of the American West, past and present. Its archives house more than 4,000 artifacts and information about more than 750 remarkable women; the Hall of Fame has 220 honorees, including author Laura Ingalls Wilder, Hollywood’s Dale Evans, and Lewis and Clark’s guide Sacagawea. The 33,000 square-foot museum is part of the Will Rogers Memorial Complex in the heart of the city’s cultural district.

“Even though the museum couldn’t have a more American focus, the project was actually a global collaboration,” says Electrosonic program manager Tom Rowat. “The design consultant was a French company and the exhibit fabricator was an Italian company.”

The museum’s new signature piece is an interactive mobile, a hanging sculpture held in equilibrium by rods and weighted objects that balance each other. The mobile, suspended in the Grand Rotunda’s towering atrium, grabs the attention of visitors entering the museum and is an engaging focal point for the formal dinners and fundraisers held in the space.

The mobile includes rotating graphic panels and a dozen rotating projection screens, all hanging from rods suspended from the ceiling.  Electrosonic furnished BrightSign players that feed NEC LED projectors, which display video clips onto the 12 projected screens. The projectors are also part of the mobile itself; they are mounted on their sides in double-sided casings.

“Exhibit fabricator Goppion was tasked with engineering the mobile,” Rowat reports. “There are slip rings on the roof of the museum to supply power and Ethernet through the rods. When the mobile is operating, the effect is pretty amazing!”

The mobile’s video content can be changed to support special events taking place in the Grand Rotunda.

The new permanent first-floor gallery highlights cowgirls in Wild West shows and the legendary sharpshooter, Annie Oakley. Four small and one large Pepper’s ghost exhibits are triggered by motion detectors buried in the walls. Visitors approach a viewport-style hole where they can view the special effects formed by pairs of 20-inch video monitors and half-silvered mirrors. A life-size Pepper’s ghost of Annie Oakley was created with a ceiling-mounted Panasonic projector.

A photo booth, where visitors can pose with historical images and print or email themselves a picture, is outfitted with a Dell computer, a Point Grey Flea camera, a small Elo Touch Solutions touchscreen and monitors. Software was supplied by Blue Yeti.

Electrosonic programmed the Crestron system that controls a total of 31 BrightSign players, an array of projectors and monitors throughout the gallery.

“We have remote access to the museum if there are any issues to deal with,” notes Rowat. “With the TeamViewer utility, I can log onto the site and check the status of the operator panel. But everything is working well, and everyone is very happy with the Grand Rotunda’s mobile and new gallery.”

Joe Kleimanhttp://wwww.themedreality.com
Raised in San Diego on theme parks, zoos, and IMAX films, Joe Kleiman would expand his childhood loves into two decades as a projectionist and theater director within the giant screen industry. In addition to his work in commercial and museum operations, Joe has volunteered his time to animal husbandry at leading facilities in California and Texas and has played a leading management role for a number of performing arts companies. Joe has been News Editor and contributing author to InPark Magazine since 2011. HIs writing has also appeared in Sound & Communications, LF Examiner, Jim Hill Media, and MiceChat. His blog, ThemedReality.com takes an unconventional look at the attractions industry. Follow on twitter @ThemesRenewed Joe lives in Sacramento, California with his fiancé, two dogs, and a ghost.
Share
Facebook
Twitter
Linkedin
Email
Print
WhatsApp
Pinterest
ReddIt
Tumblr
Previous articleADG Work Showcased at Nine of USA Today’s Top 10 Indoor Waterparks
Next articleNational Blues Museum Receives Grant from American Express for Restoration