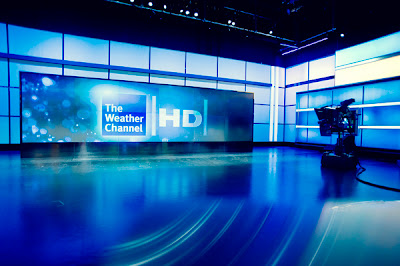 Los Angeles, CA, USA (December 18, 2012) — When The Weather Channel wanted to upgrade the primary studio set at its Atlanta headquarters, it turned to Electrosonic to install a new video wall to replace the previous display the company had provided. The new system, comprised of 12 Christie® Entero™ LED-illuminated rear-projection display cubes, is now seen as a backdrop for on-air talent and is a vehicle for live video and map presentations.


“In 2008, we supplied a rear-screen projection edge-blended system with Christie projectors,” explains Electrosonic Systems Consultant Pete Rajcula. “We have an ongoing relationship with The Weather Channel, and when they were looking for a new alternative to the blended system, we suggested Christie’s LED-illuminated DLP cubes, which offer extremely long lamp life, rich color and easy maintenance.”

Rajcula notes that while the former system was state-of-the-art at the time, LED-illuminated cubes have now reached maturity in the market, allowing the Weather Channel to reap the benefits of the technology.

The installation was challenged by the need to do the work on a fully functioning set. Electrosonic installed the wall’s pedestal and cubes, adjusted the geometry and color balanced the screens to match the studio lighting.

The video wall is designed in a 2×6 configuration with dimensions measuring 26.9 feet wide by 6.8 feet high. A three-output Vista Spyder image processor drives a trio of 1-in/4-out distribution amps. Each of the DAs, in turn, drives one of three 2×2 sections of the wall. The video wall does its own processing of each 2×2 section, creating one large dynamic image across the display.

Andy Borum was Electrosonic’s project manager for the installation. “Everything went smoothly even though the studio was in use,” he reports. “The Weather Channel was prepared for our arrival, so we were able to build the wall and make the initial tweaks without disrupting on-air production.”

About Electrosonic
Electrosonic is an international audio-visual company that creates tailored, state-of-the-art solutions for a wide range of markets including theme parks, museums, control rooms, and corporate meeting rooms. Since its founding in 1964, Electrosonic has built a strong reputation for working on complex projects, both large and small, and has developed lasting partnerships with customers and suppliers. Beyond complete integrated systems, Electrosonic provides a comprehensive scope of services including technical design, projector lamp sales, maintenance and operational support.

Joe Kleimanhttp://wwww.themedreality.com
Raised in San Diego on theme parks, zoos, and IMAX films, InPark's Senior Correspondent Joe Kleiman would expand his childhood loves into two decades as a projectionist and theater director within the giant screen industry. In addition to his work in commercial and museum operations, Joe has volunteered his time to animal husbandry at leading facilities in California and Texas and has played a leading management role for a number of performing arts companies. Joe previously served as News Editor and has remained a contributing author to InPark Magazine since 2011. HIs writing has also appeared in Sound & Communications, LF Examiner, Jim Hill Media, The Planetarian, Behind the Thrills, and MiceChat His blog, ThemedReality.com takes an unconventional look at the attractions industry. Follow on twitter @ThemesRenewed Joe lives in Sacramento, California with his wife, dog, and a ghost.
Share
Facebook
Twitter
Linkedin
Email
Print
WhatsApp
Pinterest
ReddIt
Tumblr
Previous articleKings Dominion Announces Rides for Expanded Planet Snoopy
Next articleALCHEMY studio Working with The Australian Museum on New Traveling Exhibition Development Process