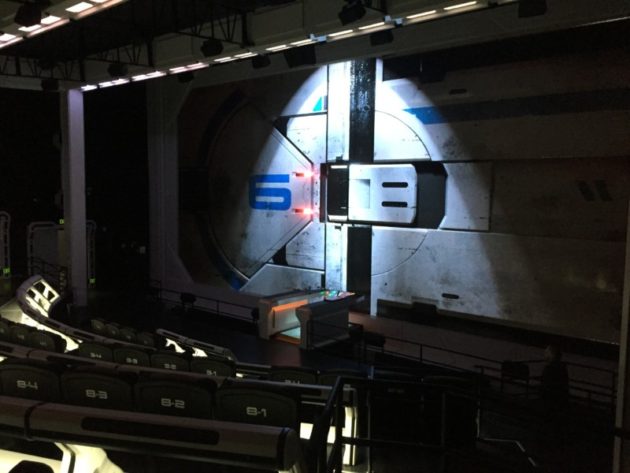 3D Live, specialists in immersion and 3D, partnered with Electrosonic on the project, which features 3D Live’s patented high-resolution 3D LED panel that delivers a truly holographic experience.  Electrosonic installed a full-range audio system for the new ride and installed and programmed its video playback and show control systems.

“Mass Effect: New Earth” has been custom designed for California’s Great America by 3D Live and Cedar Fair.  3D Live brought in Halon Entertainment to manage the game engine animation portion of the ride.  Guests, wearing passive 3D glasses, sit in an 80-seat Action Theater with 3D Live’s 60-foot, 4K 3D LED screen in front of them and 80-channel surround sound enveloping them.  An actor playing Conrad Verner captains the audience’s ship, which travels alongside the main starship, Normandy, through a mass relay to the planet Terra Nova.  Guests’ MediaMation motion seats are outfitted with leg pokers and neck ticklers as well as wind, water, smell and vibration effects.

“We had never turnkeyed a ride before, so we felt it best to reach out to a company with a background in that space,” says 3D Live cofounder and CEO Nathan Huber.  “We talked to Electrosonic account executive Josh Cottrell about assisting us with systems integration.  From the get-go Electrosonic was helpful in the budgeting process and getting all our ducks in a row for a project of this scope.  On-site supervisor Ken Fagaines exuded positive energy throughout production and engineer Jim Funke was one of those guys who could find a solution to everything.  They were great!”

Electrosonic Design Consulting facilitated the concept – schematic design with a focus on facility impact, system control and audio distribution design.  The engineering and operations teams then provided backbone project support through to the end.

The Q-SYS acts as the DSP for the attraction; it has the ability to play 80+ channels of audio synchronized with video.  A QSC Touch Mix 16 digital audio mixer is the mixing interface.  70+ QSC speakers fill the Action Theater, exit way and queue, including four QSC dual 18-inch subs.

Electrosonic installed and programmed a 7th Sense Delta Infinity II server to support 3D Live’s content, media processors and proprietary 3D LED screen.  An additional input card enables the server to be adapted to another source, such as a PC for a PowerPoint presentation in the theater space.

“Mass Effect: New Earth” has received great reviews – it stands on its own in the category and was completed for a fraction of the cost of other big-name attractions,” reports Huber.  “Everyone at Electrosonic did a great job: They were goal-driven and not time clock-driven.  We’ll be sure to work with Jim, Ken and the Electrosonic team on our next project.”

Joe Kleimanhttp://wwww.themedreality.com
Raised in San Diego on theme parks, zoos, and IMAX films, InPark's Senior Correspondent Joe Kleiman would expand his childhood loves into two decades as a projectionist and theater director within the giant screen industry. In addition to his work in commercial and museum operations, Joe has volunteered his time to animal husbandry at leading facilities in California and Texas and has played a leading management role for a number of performing arts companies. Joe previously served as News Editor and has remained a contributing author to InPark Magazine since 2011. HIs writing has also appeared in Sound & Communications, LF Examiner, Jim Hill Media, The Planetarian, Behind the Thrills, and MiceChat His blog, ThemedReality.com takes an unconventional look at the attractions industry. Follow on twitter @ThemesRenewed Joe lives in Sacramento, California with his wife, dog, and a ghost.
Share
Facebook
Twitter
Linkedin
Email
Print
WhatsApp
Pinterest
ReddIt
Tumblr
Previous articleSeaWorld Entertainment Announces New Coaster and Show Experiences for SeaWorld and Busch Gardens Parks in 2017
Next articleCedar Fair Closes FEARVR Virtual Reality Horror Experiences at Three Parks