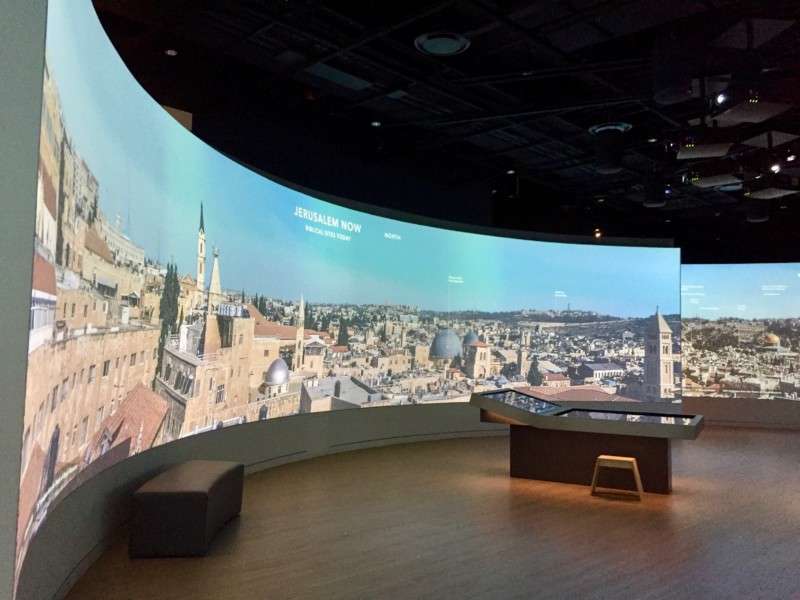 Museum of the Bible has opened in Washington, D.C., just two blocks from the National Mall, documenting the narrative, history and impact of the Bible.  It contains more than 1,000 objects and artifacts, including papyri, Torah scrolls, medieval manuscripts, and rare printed Bibles.

The seven public floors of the museum emphasize different aspects of the Bible.  Electrosonic was hired by exhibit contractor Maltbie to provide the AV and control equipment, installation, programming, commissioning and project management for the second floor, which focuses on the Bible’s impact on world culture and American history.  During the design phase Electrosonic worked closely with Maltbie, PPI Consulting, and content creators C & G Partners for almost two years on an extensive range of exhibits in three major exhibit spaces.

In the “Bible in America” exhibit, visitors discover the Bible’s impact on the Founders, Abraham Lincoln and Martin Luther King in separate exhibits.  The immersive Great Awakening Theater transports visitors to colonial Philadelphia to witness the fervor surrounding the sermons of George Whitefield.  An interactive touchscreen exhibit enables visitors to peruse a library of gospels and spirituals performed by various artists.  Three touch kiosks pose survey questions about Bible issues with results projected onto a curved screen.

The “Bible in the World” galleries show the Bible’s influence in film, music, literature, fashion and government.  The Stage and Screen Theater features clips from biblical-themed films and theatrical productions.  Video projection spotlights biblical architecture with front, side and ceiling views of several famous churches and cathedrals.  An interactive touchscreen allows visitors to explore literary classics influenced by the Bible while a video projection reveals dramatic remnants of burned books.  Interactive stations also offer the personal and professional stories of people impacted by the Bible, explore the history and revival of the Hebrew language, and show the relationship between human rights and the Bible.  A jail cell set with interactives demonstrates retributive and restorative justice.

In the “Bible Now” exhibit space visitors witness the Bible’s dynamic presence in a feed of global data.  A touch table display allows visitors to interact with and search for real-time statistics from the Internet.  A spectacular panoramic projection provides a 360º time-lapse view of Jerusalem from sunrise to sunset and back to sunrise again.  The Joshua Recorder, housed in a cylindrical video recording booth, invites visitors to record a clip about how the Bible has impacted their lives.  Clips are vetted and may be selected for public viewing via Joshua Player touchscreens mounted to the exterior of the booth.

Electrosonic also built three multi-rack control rooms for the second-floor exhibit spaces.  Museum of the Bible has a one-year service agreement with Electrosonic for post-installation support.