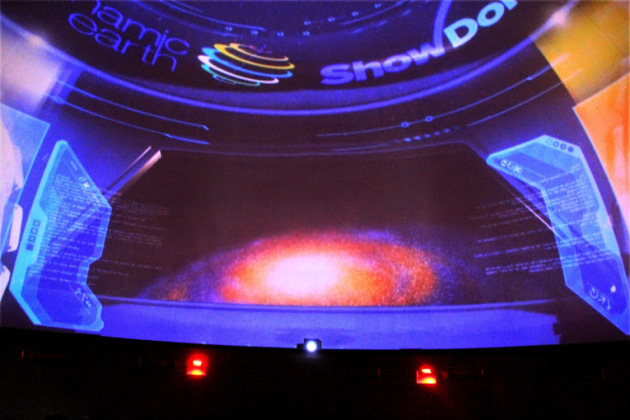 Los Angeles, CA, USA — The ShowDome at Our Dynamic Earth (ODE) in Edinburgh has been transformed with support from Electrosonic, which provided refurbishment and technical upgrades to one of Scotland’s premier destination visitor attractions.  In a two-phase project, Electrosonic has given the space a full-dome projection upgrade, a new theater layout, 106 new seats, and a state-of-the-art server and content management system.

ODE showcases earth science by taking visitors on a journey through our planet’s past, present and future through interactive exhibits and a stop in the 14-meter ShowDome theater, which originally opened in 1999.

“The client came to us for our ideas and proposal, which we developed with them,” says Electrosonic project manager Phil Downie. “The objectives were to upgrade the theater to provide a higher-quality feel and experience for the audience, and to increase the flexibility of show playback and show management. The solution was to increase the capacity available to store shows ready for playback, improve the efficiency of the ‘workflow’ of the show data, increase the level of control for planetarium systems, and to have a wireless touch-panel interface.”

Phase one of the project included replacing the former projection system with a system featuring five channels of LED projection. The existing seating was removed, the floor was reinforced and new tiered flooring was installed along with 106 premium seats, provided by Euro Seating, in a new forward-facing configuration.  A stage was built at the front of the theater to support the needs of staff, corporate guests and presenters.

Electrosonic also supplied new Philips lighting systems, including LED washes for scenic and mood effects, and spotlights for floor highlighting and on the stage.  An insert projector display was added for digital presentations; a control system with an Apple iPad interface manages all media, lighting, audio and display hardware within the dome.

“The refurbishment delivered a higher-quality theater with the capability to provide ambience and mood and, thus, an enhanced audience experience,” says Downie.  “The ShowDome is also capable of more diverse applications with a stage for presentations and performances.” 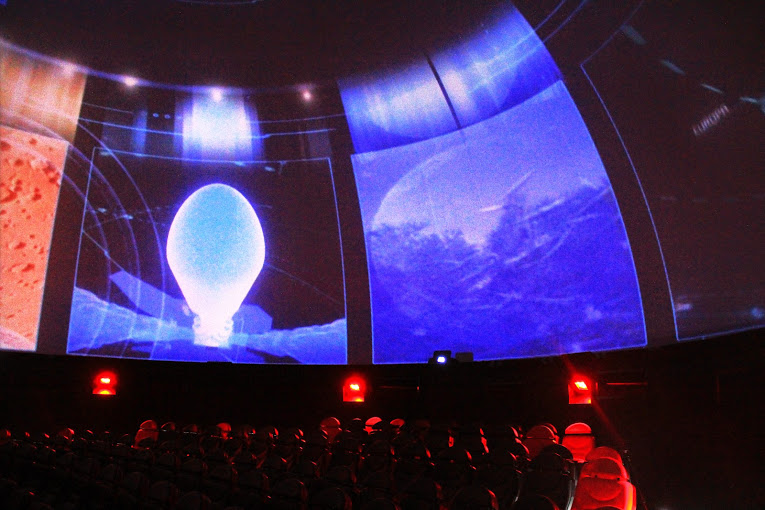 In the second phase of the project, two 7thSense media server systems feed the projection of full-dome films inside the theater.   One of the servers represents a new configuration, which eliminates the requirement for time-consuming slicing and encoding of large, full-dome masters for a multi-channel dome display.

“The new server improves the efficiency of the ‘workflow’ of the show data in several ways,” Downie notes.  “Slicing the shows into each channel is no longer needed, and when storing the shows for back up, only the masters have to be stored.  There are no sliced channel files, which hugely reduces the storage required.”

Because the media server plays shows directly from a large amount of primary storage, it can play from a large selection of archived shows – up to 35 30-minute shows in 3K format.  This eliminates the need to move shows from a second-tier storage.

But should more storage be needed, a secondary NAS server can easily be added with a capacity starting at 36TB.  Transferring shows from secondary to primary storage now requires moving only one set of masters, which takes considerably less time than moving five channels of carved video.

A new control interface allows portable touch control with multiple access layers.  This provides control that can be limited to turning lights on and off, or extended through show control and full administrator access to the equipment and setup of shows.  A main rack room houses equipment.

The ShowDome is currently presenting “Supervolcanoes,” an immersive planetarium show that looks back at rare classes of volcanic eruptions and moves beyond Earth to explore the impact of giant eruptions around our solar system. The film visits Yellowstone National Park asks the question: can a supervolcano erupt in our time?

Aspect performed the carpentry and theater fit out.

Joe Kleimanhttp://www.themedreality.com
Raised in San Diego on theme parks, zoos, and IMAX films, Joe Kleiman would expand his childhood loves into two decades as a projectionist and theater director within the giant screen industry. In addition to his work in commercial and museum operations, Joe has volunteered his time to animal husbandry at leading facilities in California and Texas and has played a leading management role for a number of performing arts companies. Joe has been News Editor and contributing author to InPark Magazine since 2011. HIs writing has also appeared in Sound & Communications, LF Examiner, Jim Hill Media, and MiceChat. His blog, ThemedReality.com takes an unconventional look at the attractions industry. Follow on twitter @themedreality Joe lives in Sacramento, California with his fiancé, two dogs, and a ghost.
Share
Facebook
Twitter
Linkedin
Email
Print
WhatsApp
Pinterest
ReddIt
Tumblr
Previous articleFormer Dragone Executive François Girard Joins Thinkwell as VP Global Business Development
Next articleGiant Screen Film “Journey to Space” Unveils Poster and Trailer