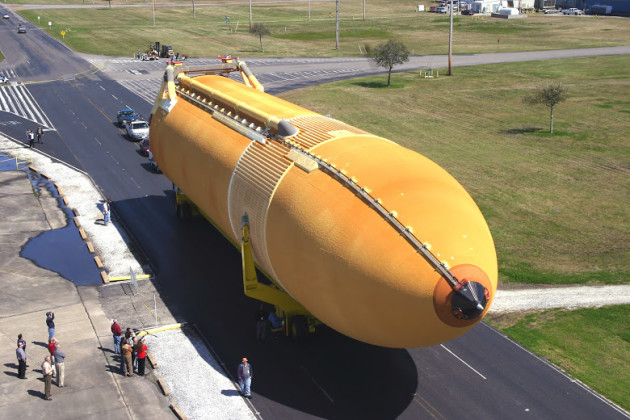 Los Angeles, CA, USA – The California Science Center Foundation has announced the next phase of “Mission 26” with the acquisition and planned move of the only flight-qualified External Tank (ET-94) in existence from NASA’s Michoud Assembly Facility in New Orleans to the Science Center in Los Angeles. The donation of this never-used artifact from NASA is significant, and allows the Science Center to fulfill its vision of building a full stack for Space Shuttle Endeavour’s final display in the launch position in the future Samuel Oschin Air and Space Center.

This will mark the only time an ET has traveled through urban streets and will evoke memories of when Endeavour traveled 12-miles from the Los Angeles International Airport to the Science Center and was cheered on by a crowd of 1.5 million in 2012. The ET-94 move is expected to take place sometime from the end of 2015 to early 2016, depending on weather conditions and the progress of cosmetic restorations.

The ET’s journey to the California Science Center and its subsequent attachment to the Orbiter will be historic. Following NASA’s customary transport methods for an External Tank, ET-94 will be shipped by barge. It will travel from the Michoud Assembly Facility through the Panama Canal to Los Angeles, then on through city streets to its final destination at the California Science Center’s Samuel Oschin Pavilion. The entire journey will take six to eight weeks. 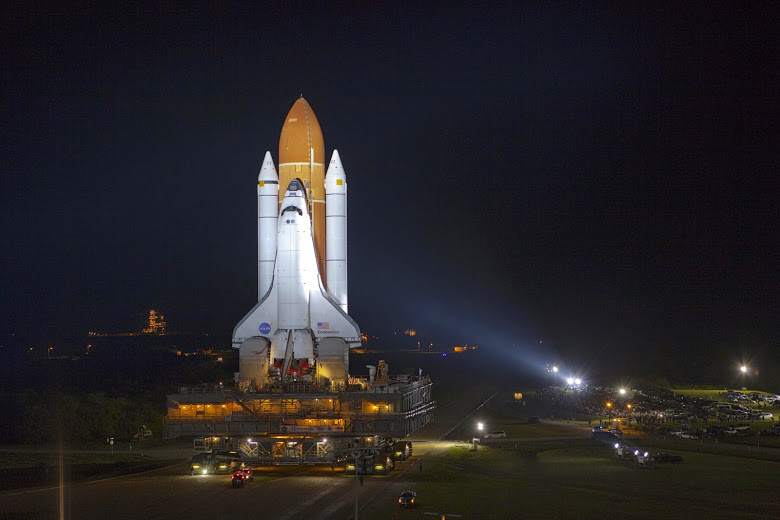 Larger and longer than Endeavour, the ET was the Orbiter’s massive “gas tank” and contained the propellants used by the Space Shuttle Main Engines (though ET-94 is empty). The tank, the only major, non-reusable part of the space shuttle, is neither as wide as Endeavour (32 feet versus 78 feet) nor as high (35 feet versus 56 feet). Because of this, fewer utilities will be impacted and no trees will be removed along ET’s route from the coast to Exposition Park, though some trimming may be necessary. The path it will take through the streets is currently being planned with city officials, utilities and community groups.

“With this gift from NASA, we will have the ability to preserve and display an entire stack of flight hardware, making the Samuel Oschin Air and Space Center an even more compelling educational experience.  It will allow future generations to experience and understand the science and engineering of the space shuttle,” notes California Science Center President Jeffrey N. Rudolph.

Los Angeles Mayor Eric Garcetti adds that, “We are thrilled that NASA has gifted the California Science Center and the city of Los Angeles with the last surviving flight-qualified space shuttle external tank (ET) in the world. The city plans to work with the Science Center to make this a great welcome and celebration as it did with Endeavour two and a half years ago. As it makes its journey, from the coast to the Science Center, it will inspire the next generation of scientists and engineers, contributing to LA’s trajectory of becoming a hub of technological innovation and the Science Center’s mission as a leader in science learning.”

Los Angeles City Councilman Curren Price adds that, “This is just the beginning of increased economic vitality and interest in science learning in this district, sparked by the California Science Center’s Mission 26. The Science Center has experienced a major increase in tourism since the arrival of Endeavour. We now expect to attract even more visitors from across the nation and around the world as the Science Center continues to build the full stack with the ET and later the Solid Rocket Boosters for the final launch display at the Samuel Oschin Air and Space Center. I am thrilled that another historic journey through the streets of Los Angeles will unite our community again in a welcoming celebration.”

Joe Kleimanhttp://wwww.themedreality.com
Raised in San Diego on theme parks, zoos, and IMAX films, Joe Kleiman would expand his childhood loves into two decades as a projectionist and theater director within the giant screen industry. In addition to his work in commercial and museum operations, Joe has volunteered his time to animal husbandry at leading facilities in California and Texas and has played a leading management role for a number of performing arts companies. Joe has been News Editor and contributing author to InPark Magazine since 2011. HIs writing has also appeared in Sound & Communications, LF Examiner, Jim Hill Media, and MiceChat. His blog, ThemedReality.com takes an unconventional look at the attractions industry. Follow on twitter @ThemesRenewed Joe lives in Sacramento, California with his fiancé, two dogs, and a ghost.
Share
Facebook
Twitter
Linkedin
Email
Print
WhatsApp
Pinterest
ReddIt
Tumblr
Previous articleVIDEO: Syfy’s Sharknado 3 Attacks Universal Studios Florida
Next articleLightware Visual Engineering to Showcase Newest Products at InfoComm 2015