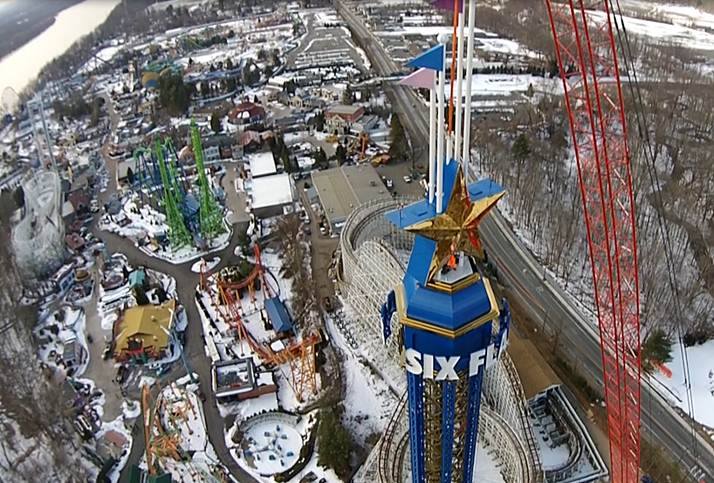 [quote]The goal has always been for us to grow into a one-stop shop for owners to get any kind of work done.” — Bill Wright, Managing Director of EMG[/quote]

“It has been very rewarding,” said Bill Wright, Managing Director of EMG. “We are now a go-to company for both parks and manufacturers. We have a lot of partnerships around the globe and that is what allows us to work on projects of so many sizes and specialties.”

The team began their year at the New York, New York Casino in Las Vegas. They replaced pipe bracing and installed some new track ties high above the din of Las Vegas Boulevard. Wright said that the casino and coaster teams have been great to work with. “The New York, New York group really knows their ride and are a great working partner. When we come in and do structural work the coaster gets shut down at night, traffic is diverted, and it is a huge undertaking. But, it allows us the ability to make significant structural replacements on the ride in a week.”

At Six Flags New England Wright and other EMG staff worked with many team members from Funtime, the manufacturer of the StarFlyer, to install another 400-foot vertical swing ride in Massachusetts. “That site was extremely challenging, but the team from Funtime attacked the job. We went from having the ride in pieces to standing vertical in 7 weeks,” noted Wright. “We had to erect the ride in an entirely different way than we did in 2013 in Texas, but we developed a good system. The park was great to work with and provided a lot of support throughout a cold, snowy winter.”

The EMG team took down a Zamperla/Reverchon Spinning Coaster and re-erected it at Six Flags Great America. EMG also did additional work with Six Flags through two magnetic brake projects- one at Six Flags Great America and another at Six Flags Mexico. “Domenic at Velocity Magnetics has been a great partner for us,” said Wright. “We have done a myriad of different retrofit projects with him, some on the new hybrid coasters others have been on older Vekoma and Schwarzkopf coasters. All have turned out well and I think that really demonstrates the wide range of the product.”

In addition to magnetic brakes EMG also sells roller coaster chain for rides of all sizes and performs control system work. “We are now able to offer our customers a huge range of services, from ride erection to rehabs, and that range across competencies means that we can serve every type of amusement park- from small ‘mom and pops’ to large corporate facilities,” said Wright.

Joe Kleimanhttp://wwww.themedreality.com
Raised in San Diego on theme parks, zoos, and IMAX films, Joe Kleiman would expand his childhood loves into two decades as a projectionist and theater director within the giant screen industry. In addition to his work in commercial and museum operations, Joe has volunteered his time to animal husbandry at leading facilities in California and Texas and has played a leading management role for a number of performing arts companies. Joe has been News Editor and contributing author to InPark Magazine since 2011. HIs writing has also appeared in Sound & Communications, LF Examiner, Jim Hill Media, and MiceChat. His blog, ThemedReality.com takes an unconventional look at the attractions industry. Follow on twitter @ThemesRenewed Joe lives in Sacramento, California with his fiancé, two dogs, and a ghost.
Share
Facebook
Twitter
Linkedin
Email
Print
WhatsApp
Pinterest
ReddIt
Tumblr
Previous articleDiscovery Times Square Hosts World Premiere of STEM-Oriented Marvel’s Avengers S.T.A.T.I.O.N.
Next articleHistoric Calico Mine Train Reopening With Modern Technology on June 14 at Knott’s Berry Farm