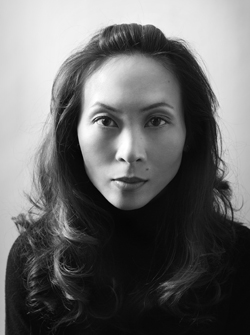 Jen defines her work by context, not medium. Whether she is designing pixelated type for an exhibition on augmented reality, animations for a smartphone or a Times Square skyscraper, or illustrative print graphics for a fashion designer, her work draws on references from a diverse range of cultural, historical, aesthetic, and technological sources.

One of Pentagram’s newest partners, and the only intern to ever return as a partner, Jen was born in Taipei and studied graphic design at the School of Visual Arts in New York. Before joining Pentagram, she worked as a senior designer at Base Design, focusing on fashion and brand identity work, and at 2×4 she led large-scale branding, exhibition, environmental, and editorial projects. She also was creative director for Stone Yamashita Partners before establishing her own firm, Njenworks, in 2010.

Named one of Dwell magazine’s “Women of Influence” and one of Graphic Design USA’s “People to Watch” for 2013, Jen has built a body of work that encompasses brand identities, environmental design, multi-scale exhibitions, signage systems, print, motion, and interactive graphics.

“Jen leads a new generation of designers who are comfortable crossing media, discipline, and
technology, and her work often bridges the digital and physical worlds,” says Julie Vogel, Principal of Kate Keating Associates (San Francisco) and Co-Chair of the 2013 SEGD Conference with Lonny Israel, Associate Director with Skidmore Owings & Merrill. “We look forward to her perspectives on navigating the warp-speed pace of the media landscape today.”

Jen joins a heavy-hitting roster of speakers who will participate in the 2013 SEGD Conference, including:

The annual SEGD Conference is said to be the only international design event focused on visual communications in the built environment.

Judith Rubin
Judith Rubin ([email protected]) is a leading journalist, publicist, strategist, blogger, content marketing specialist and connector in the international attractions industry. She excels at writing about all aspects of design and technical design, production and project management. Areas of special interest include AV integration and show control, lighting design and acoustics, specialty cinema, digital video and world’s fairs. Judith has ties to numerous industry organizations. From 2005-2020 she ran communications, publications and social media for the Themed Entertainment Association (TEA). In 2013, she was honored with the TEA Service Award. She was development director of IMERSA, and co-chair of the 2014 IMERSA Summit. She was publicist for the Large Format Cinema Association in the 1990s, now part of the Giant Screen Cinema Association (GSCA) and has also contributed to the publications of PLASA, IAAPA and the International Planetarium Society. Already making her mark as a magazine and book editor, Judith joined World’s Fair magazine in 1987, which introduced her to the attractions industry. Launching as a freelancer in the mid 1990s she has contributed to dozens of publications and media outlets including Funworld, Lighting&Sound America, Sound & Communications, Urban Land, The Raconteur and The Planetarian. She joined InPark in 2010. Judith earned a Bachelor of Fine Arts from Pratt Institute. She has lived in New York City and the San Francisco Bay Area, and now makes her home in Saint Louis, where she is active in the local arts and theater community.
Share
Facebook
Twitter
Linkedin
Email
Print
WhatsApp
Pinterest
ReddIt
Tumblr
Previous article
Midwest Museums Assn announces conference program for July 14-17 in Madison, WI
Next article
PHOTOS: Six Flags Great America’s Batman running backward