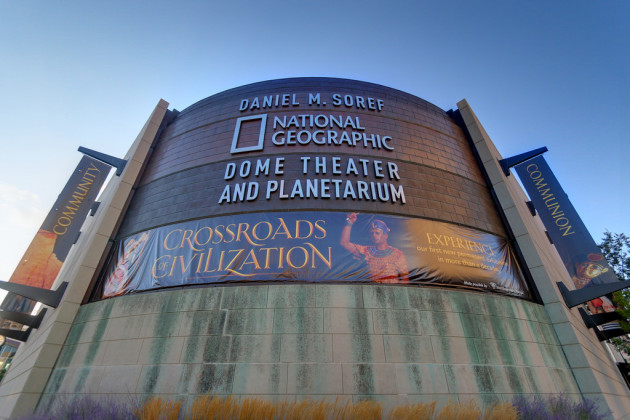 Through E&S’ own auto-alignment and auto-blending systems, the five projectors precisely align and blend together to form a single, seamless fulldome image. In 2014, the 8K Digistar 5 system went head-to-head with 15/70 film in a special demo for the Giant Screen Cinema Association (GSCA) in which the 8K Digistar system was overwhelmingly lauded to produce a better image than 15/70 film. This was the first time in history that a digital dome system surpassed 15/70 film, which has been the gold standard of giant screen image quality since the 1970s.

Now this groundbreaking digital dome cinema technology is coming to Milwaukee. There is great excitement and anticipation from the staff at MPM.

As Robert Bonadurer, Director of the Dome Theater says, “The new 8K Digistar 5 system will allow us to bring our guests closer to the action than ever before. Whether you’re voyaging through the universe in a planetarium show or exploring an adventure on Earth in a giant screen film, the stunning imagery that appears before your eyes will leave you in awe.”

In addition to the amazing 8K image quality, the Digistar 5 system offers a 3D real-time astronomy database and capability that allows operators and presenters to take audiences on virtual tours through the universe. Audiences can fly out to the edge of the solar system to explore Pluto and its moons; investigate the mysterious and yet-to-be discovered “planet nine,” or travel as far as our data can take us: over 14 billion light years away to the moments after the big bang.

Additionally, Digistar can import images and video sequence from virtually any source and display them on the dome. According to E&S Vice President and General Manager, Kirk Johnson, “MPM has used our Digistar 3 system in the Dome Theater for many years with a 4K system. With this new 8K Digistar 5 system, the theater will have exponentially more capabilities to educate and delight audiences of all ages with an unprecedented variety of stunning content!”

The upgrades are part of the $1.6 million dollar revitalization gifted to MPM by the Daniel M. Soref Charitable Trust. The Trust also funded the development and creation of the original Daniel M. Soref Planetarium in 2006 and its 3D update in 2013.

Joe Kleimanhttp://wwww.themedreality.com
Raised in San Diego on theme parks, zoos, and IMAX films, InPark's Senior Correspondent Joe Kleiman would expand his childhood loves into two decades as a projectionist and theater director within the giant screen industry. In addition to his work in commercial and museum operations, Joe has volunteered his time to animal husbandry at leading facilities in California and Texas and has played a leading management role for a number of performing arts companies. Joe previously served as News Editor and has remained a contributing author to InPark Magazine since 2011. HIs writing has also appeared in Sound & Communications, LF Examiner, Jim Hill Media, The Planetarian, Behind the Thrills, and MiceChat His blog, ThemedReality.com takes an unconventional look at the attractions industry. Follow on twitter @ThemesRenewed Joe lives in Sacramento, California with his wife, dog, and a ghost.
Share
Facebook
Twitter
Linkedin
Email
Print
WhatsApp
Pinterest
ReddIt
Tumblr
Previous article$1 Billion Warner Bros. World Under Construction Adjacent to Ferrari World Abu Dhabi
Next articlePanasonic Adding Videro Operating System to AF1 Series Monitors