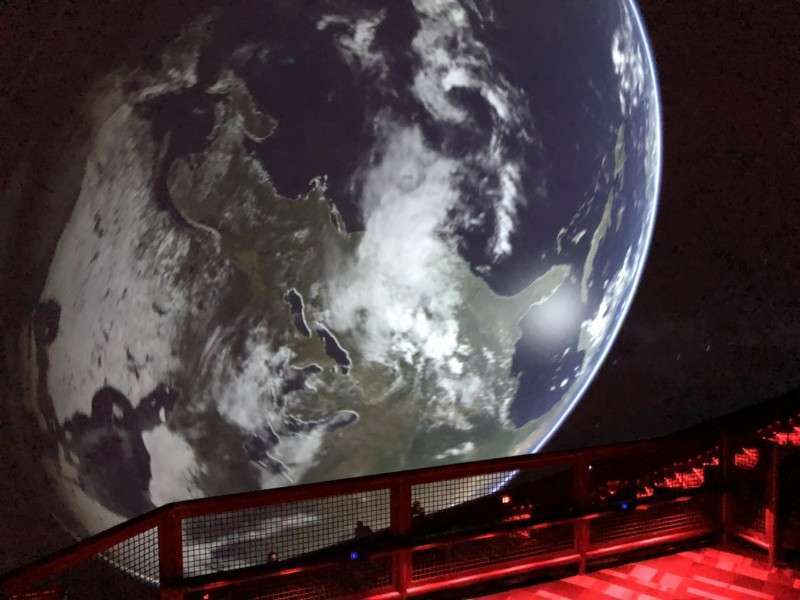 The new Jennifer Chalsty Planetarium at Liberty Science Center has opened, becoming the largest planetarium in the Western Hemisphere, and featuring the latest Digistar 6 technology.

The theater represents state-of-the-art digital projection technology and scientific visualization from Evans & Sutherland (E&S) and features seamless NanoSeam dome screen technology from Spitz. The True8K system projects more than 88 million pixels over the entire dome. According to E&S, this is the highest giant screen dome resolution in the world. The 10 Christie Boxer 4K projectors (30,000 lumens each, for a total brightness of 300,000 lumens) are seamlessly aligned and blended with E&S auto alignment and auto blending systems for a bright, colorful image that, according to E&S, surpasses the quality of 1570 film.

“Evans & Sutherland and their talented team have delivered a spectacular, high-resolution digital system that has exceeded our expectations. Liberty Science Center is now home to the biggest and most technologically advanced planetarium in the Western Hemisphere,” said Paul Hoffman, President and CEO of Liberty Science Center. “We are delighted to introduce the state-of-the-art Jennifer Chalsty Planetarium to the world, allowing our visitors to experience worlds they’ve never seen, and inspire them to dream beyond their wildest imaginations.”

“The True8K system at Liberty Science Center showcases the cutting-edge of digital projection technology and the power of our Digistar 6 system to present a nearly unlimited variety of content to the audiences at this amazing facility,” said Kirk Johnson, President and COO of Evans & Sutherland. “We are honored that Liberty Science Center chose E&S to create the first True8K giant screen theater in the world and look forward to working together for many years into the future.”

In addition to having the ability to present giant screen films in unprecedented clarity and beauty, the Digistar 6 system has an extensive suite of real time astronomy features, allowing audiences to explore the universe in three dimensions while witnessing the latest scientific discoveries, automatically updated in the system on almost a daily basis.

Joe Kleimanhttp://wwww.themedreality.com
Raised in San Diego on theme parks, zoos, and IMAX films, InPark's Senior Correspondent Joe Kleiman would expand his childhood loves into two decades as a projectionist and theater director within the giant screen industry. In addition to his work in commercial and museum operations, Joe has volunteered his time to animal husbandry at leading facilities in California and Texas and has played a leading management role for a number of performing arts companies. Joe previously served as News Editor and has remained a contributing author to InPark Magazine since 2011. HIs writing has also appeared in Sound & Communications, LF Examiner, Jim Hill Media, The Planetarian, Behind the Thrills, and MiceChat His blog, ThemedReality.com takes an unconventional look at the attractions industry. Follow on twitter @ThemesRenewed Joe lives in Sacramento, California with his wife, dog, and a ghost.
Share
Facebook
Twitter
Linkedin
Email
Print
WhatsApp
Pinterest
ReddIt
Tumblr
Previous articleGillian Smith Named VP Marketing and Sales at LEGOLAND Florida Resort
Next articleKeynote Speakers Announced for IAAPA Leadership Conference 2018