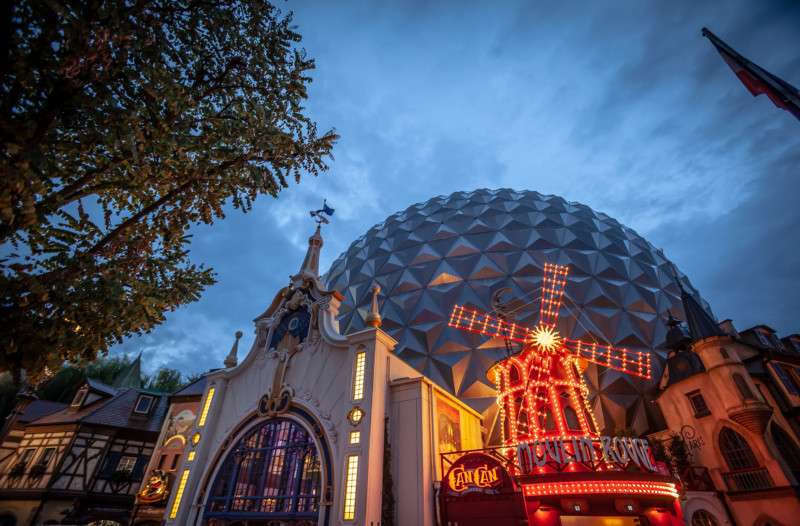 The dark-ride coaster Eurosat, a landmark of Europa-Park’s French themed area, opened in 1989, has undergone extensive modifications. The rails and cables of the Eurosat ‒ CanCan Coaster have been completely reinstalled, and the ride’s technology and theming has also undergone a major overhaul. Visitors will now experience a special dark-ride coaster taking them through an illuminated Paris. The entire façade has likewise been given a vivid new look and, in line with the well-known ‘Moulin Rouge’ ‒ a Parisian bastion of fun and entertainment since 1889 ‒ it has been attractively designed, displaying the rich culture and history of France. At the other side of the iconic silver globe, Eurosat Coastiality offers a unique virtual reality experience.

Europa-Park is world-famous for its detailed and realistic design. The redesigned façade, in front of the French themed area’s landmark, is greeting park guests now with a true-to-life replica of the Parisian variety theatre Moulin Rouge. The redesign references the well-known sight and invites visitors to dive into Paris of the 19th century. A ride on the Eurosat – CanCan Coaster evokes the times of the Belle Epoque and allows visitors to experience a night roller coaster ride of a very special kind. Germany’s largest theme park honors the vaudeville theater with, alongside other iconic Parisian symbols, a faithful replica of the red mill which is run today by the third generation of the Clerico family and is already supported by the fourth generation. Cancan is a French style of dance that was created around the year 1830 and is still performed by dancers at the Moulin Rouge in the Montmartre district. Europa-Park is the first theme park worldwide to cooperate with this world-famous variety theater. 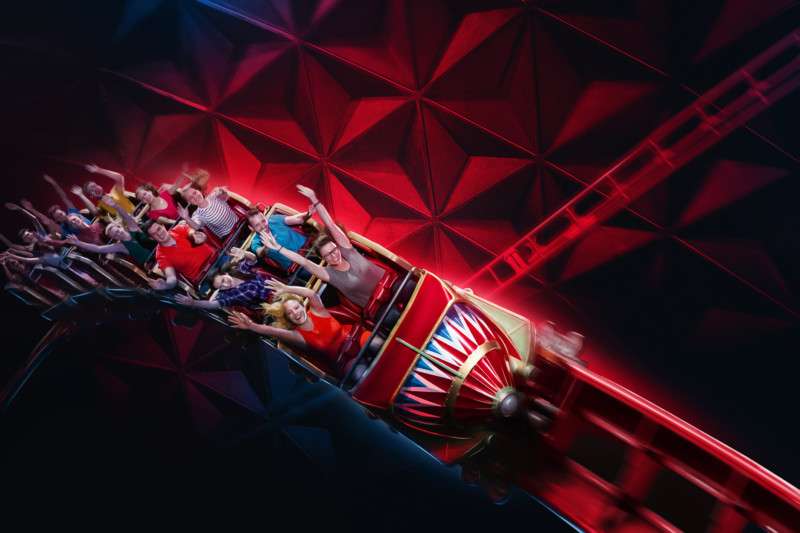 Since the end of the 2017 summer season, the French themed area of Europa-Park has undergone extensive construction, with a focus on the 45-metre-high dark roller coaster Eurosat which, since 1989, has welcomed more than 80 million people through its characteristic sphere. The rails, alongside all other technical aspects, as well as the theming are completely new. The ride, created by Mack Rides, provides a significantly improved riding experience thanks to innovations and advancements in rail manufacturing by the Waldkirch company. In memory of the inventor Franz Mack, and at the request of the Mack family, the track layout is very close to the original in the futuristic silver ball, and continues to be around 900 meters long. Reconstruction of the ride took ten month to be completed.

As part of the redesign, MackMedia has created yet another new virtual reality experience in Europe’s most popular theme park – Eurosat Coastiality which starts at the back of the iconic silver globe. In order to create the innovative ride experience, a second station with shift track and separate trains was integrated into the dark ride roller coaster. There are now two different attractions with unique themes and entrances in one ride, using the same route – a world first.

As soon as the passenger puts on the VR headset in the Eurosat Coastiality attraction, they will dive into a futuristic 360-degree experience based on Luc Besson’s blockbuster movie ‘Valerian – The City of a Thousand Planets’. Even before the start of the roller-coaster ride, visitors can put on the VR headset in a pre-show room, allowing them to move around freely. The real, physical environment is replicated exactly within the virtual space. This will allow the guest to board the train with the VR headset via the train station. Once there, the VR roller-coaster ride begins without interruption. In total, up to 14 passengers can use the VR experience at the same time.

Part of the innovations of the French themed area is, since the middle of August, also the new family attraction “Madame Freudenreich Curiosités”. Visitors are able to experience various exciting scenarios in the house of dinosaur fans. They have the chance to discover many prehistoric artefacts from these great giants of the past. Then, heading past Dino-Selfies with Ms. Freudenreich and down to the former wine cellar, visitors will find a dinosaur breeding farm amidst a lush garden, where the Dinos are fed with delicious Gugelhupf and many other surprises are waiting to be discovered.

Further innovations of the French area include a floating bistro boat with seating for around 60 people across two floors, the new traditional Flammkuchen stand, and the water fountain show “Fraternité” that will entertain visitors every half hour with different French music. Newly developed soundtracks from Mack Music, for the attractions Eurosat – CanCan Coaster and Madame Freudenreich Curiosités, will complete the experience with their authentic and catchy tunes.

The extensive redesigns pay homage to the rich culture of France, its history, and the unique way of life in the neighboring country.

Joe Kleimanhttp://wwww.themedreality.com
Raised in San Diego on theme parks, zoos, and IMAX films, InPark's Senior Correspondent Joe Kleiman would expand his childhood loves into two decades as a projectionist and theater director within the giant screen industry. In addition to his work in commercial and museum operations, Joe has volunteered his time to animal husbandry at leading facilities in California and Texas and has played a leading management role for a number of performing arts companies. Joe previously served as News Editor and has remained a contributing author to InPark Magazine since 2011. HIs writing has also appeared in Sound & Communications, LF Examiner, Jim Hill Media, The Planetarian, Behind the Thrills, and MiceChat His blog, ThemedReality.com takes an unconventional look at the attractions industry. Follow on twitter @ThemesRenewed Joe lives in Sacramento, California with his wife, dog, and a ghost.
Share
Facebook
Twitter
Linkedin
Email
Print
WhatsApp
Pinterest
ReddIt
Tumblr
Previous articleMad Systems’ Paradigm Shift
Next articleThe Hettema Group’s Nina Rae Vaughn named TEA Master