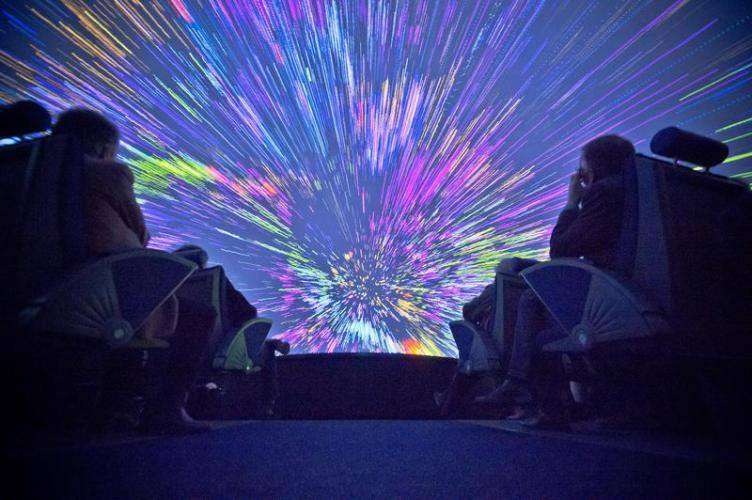 Using a seamlessly blended array of laser or lamp-based projectors, AEOS allows domes or flat screen theaters to achieve resolutions of 8K or even higher while maintaining their fulldome, partial dome, or 4:3 aspect ratio flat screens. An AEOS theater can also function as a multipurpose venue with available turn-key presentation and digital marketing packages.  AEOS is the complete solution for giant screens.

Jon Shaw, CEO of E&S said, “As we looked at the giant screen cinema from the standpoint of the audience, it became clear the entire experience needed to be reinvented to take full advantage of today’s state-of-the-art digital technology. By combining E&S’ stunningly sharp display systems with Sonics2 high-powered surround sound audio systems, and Spitz seamless domes or flat screens, AEOS has introduced a new gold standard for giant screen theaters.”

“Since the advent of digital cinema, image resolution has been limited to what a single projector can achieve. This is not the case with AEOS. Other providers are limiting themselves to a maximum image resolution of 4K by using only one projector. This is a big downgrade in resolution from 70 mm film,” said Lynn McCroskey, CEO of Sonics2. “In addition, many companies are just providing generic off-the-shelf audio approaches which are inadequate for giant screen theaters. AEOS’ approach redefines what quality sounds like with purpose built speakers and equipment specifically created for giant screen venues. The 15/70 film experience has been the gold standard for giant screen theater image and sound quality for nearly 50 years. AEOS Theaters shatters that standard and redefines it.”

The AEOS experience is designed to enable theaters to stand out from the commercial theater down the block. This technology helps drive a fresh approach focused on giant flat screen and dome theaters. In addition to the new technological approach, AEOS focuses on audience experience and additional theater functionality, ultimately increasing community engagement and attendance. AEOS is intended to help inspire a love of learning for a new generation of audiences at museum and institutional theaters worldwide, renewing the success of these theaters as a premium destination experience.

AEOS will demonstrate their dome theater solution at the Saint Louis Science Center on October 12, and at The Tech Museum of Innovation in San Jose, CA as part of the ASTC Conference on October 24.

Joe Kleimanhttp://wwww.themedreality.com
Raised in San Diego on theme parks, zoos, and IMAX films, InPark's Senior Correspondent Joe Kleiman would expand his childhood loves into two decades as a projectionist and theater director within the giant screen industry. In addition to his work in commercial and museum operations, Joe has volunteered his time to animal husbandry at leading facilities in California and Texas and has played a leading management role for a number of performing arts companies. Joe previously served as News Editor and has remained a contributing author to InPark Magazine since 2011. HIs writing has also appeared in Sound & Communications, LF Examiner, Jim Hill Media, The Planetarian, Behind the Thrills, and MiceChat His blog, ThemedReality.com takes an unconventional look at the attractions industry. Follow on twitter @ThemesRenewed Joe lives in Sacramento, California with his wife, dog, and a ghost.
Share
Facebook
Twitter
Linkedin
Email
Print
WhatsApp
Pinterest
ReddIt
Tumblr
Previous articleSimEx-Iwerks Teams with Technicolor to Bring The Deep to 4D Attractions Worldwide
Next articlePhiladelphia Zoo Receives Top Honors at AZA 2017 Conference