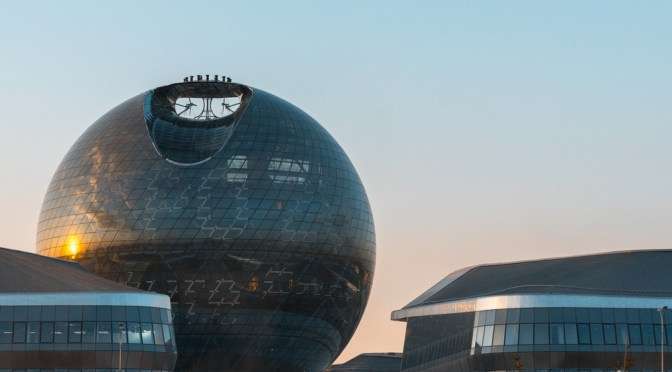 CEO of the Association of Small and Medium-Sized Enterprises, Shurygin came to Kazakhstan from Moscow on a business trip as part of the Eurasian Week International forum, which was held in Astana on August 24-26.

According to the special guest of the EXPO 2017, despite the busy schedule, he found time to see the main tourist sites of the city. The first thing he visited at EXPO 2017 was the Nur Alem – the national pavilion of Kazakhstan. Yuri admitted that he had not yet visited the Russian pavilion. The guest of honor expressed the wish that an exhibition like this would be held in his motherland as well.

“I liked the Kazakhstani pavilion. Now I need to visit the Russian one. Of course, we would like to see an event of such a scale to take place in the Urals. There is a possibility that EXPO will take place in Yekaterinburg in 2025,” he said.

“We are greeting our 3 millionth guest today. We are glad that our expectations of the planned target – 2 million visitors – have been justified. The dynamics of EXPO 2017 attendance is continuing to grow every day. 15% of visitors are foreigners, most of whom are our neighbors, citizens of the Russian Federation,” said Yessimov.

In his speech, the head of the national company also noted that, on August 24, in the National Pavilion Nur Alem, the main object of EXPO 2017, the millionth visitor was recorded. Since the Exhibition opened, the Nur Alem has been the most visited place at EXPO 2017. The pavilion is visited by 10,000 to 28,000 people every day.

Joe Kleimanhttp://wwww.themedreality.com
Raised in San Diego on theme parks, zoos, and IMAX films, Joe Kleiman would expand his childhood loves into two decades as a projectionist and theater director within the giant screen industry. In addition to his work in commercial and museum operations, Joe has volunteered his time to animal husbandry at leading facilities in California and Texas and has played a leading management role for a number of performing arts companies. Joe has been News Editor and contributing author to InPark Magazine since 2011. HIs writing has also appeared in Sound & Communications, LF Examiner, Jim Hill Media, and MiceChat. His blog, ThemedReality.com takes an unconventional look at the attractions industry. Follow on twitter @ThemesRenewed Joe lives in Sacramento, California with his fiancé, two dogs, and a ghost.
Share
Facebook
Twitter
Linkedin
Email
Print
WhatsApp
Pinterest
ReddIt
Tumblr
Previous articleJora Vision Designs App-Based Interactive Animal Enrichment Program for Serengeti-Park Hodenhagen
Next articleExpo update: Astana 2017 nearing close; Dubai 2020 prepares; Buenos Aires, Lodz, Minnesota compete for 2022/23, France, Japan, Russia & Azerbaijan compete for 2025