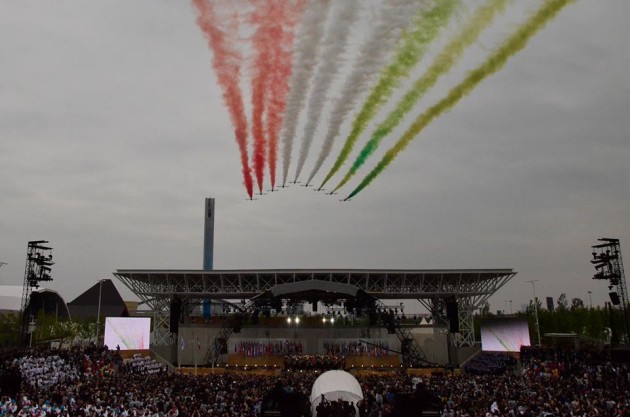 Milan, Italy (May 1, 2015) — Expo Milano 2015 has officially opened its doors to the twenty million visitors that are expected to come over the next six months. The official opening ceremony took place in the Open Air Theater, the large open space that will host concerts and official meetings until October 31, 2015.

The ceremony, hosted by Claudia Gerini and Marco Maccarini, began with one minute’s silence to commemorate the loss of life caused by the recent earthquake in Nepal.  First to take to the stage were the Ambassadors for Expo Milano 2015, Javier Zanetti, Martina Colombari, and Massimo Bottura. 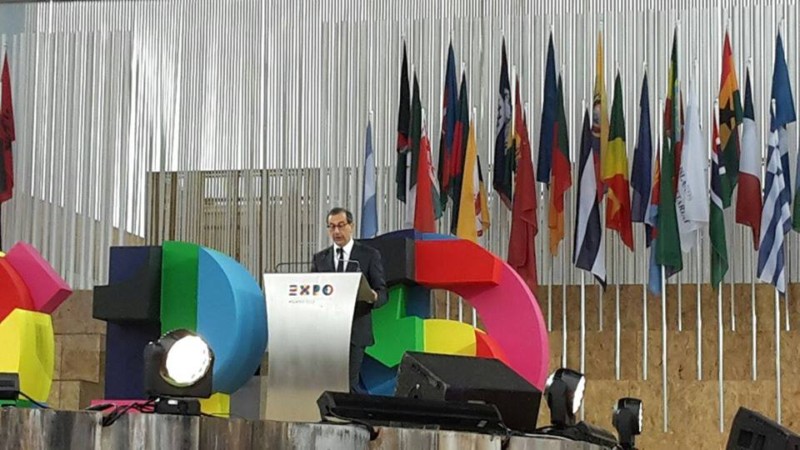 Next, the welcome speech of Giuseppe Sala, Commissioner for Expo Milano 2015, which was translated simultaneously on big screens into both English and French.

“No fewer than 54 individual pavilions have been built by the participant countries, a result never to have happened before”, said Sala, “and, to allow countries with fewer economic means to participate, we have created nine Clusters, the collective pavilions grouped according to criteria related to theme Feeding the Planet, Energy for Life

“This Universal Exposition,” added Sala, “has been a great test of work organization, and will be a wonderful opportunity for the tourism sector.”

The Commissioner also thanked all those who made the event possible, from the President of the government’s Anti-Corruption squad, Raffaele Cantone, the BIE, the participating companies, to the Italian Government and the governments of the participating countries. Finally, Sala thanked the Ambassadors, including Emma Bonino, Ermanno Olmi, and Andrea Bocelli and all those who have worked to bring Expo Milano 2015 to fruition.

For six months, Milan will be home to the world 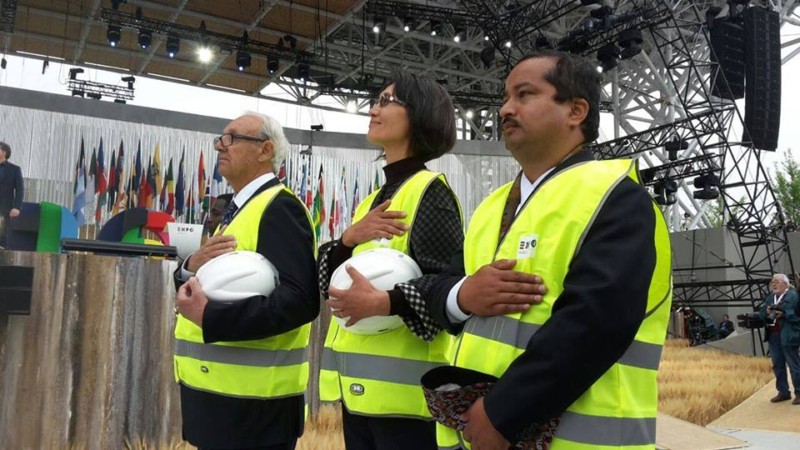 Immediately after Sala’s presentation, it was Milan Mayor, Giuliano Pisapia’s turn to address the public. The Mayor urged the people of Milan to welcome tourists and visitors arriving during the six-month period with joy and engagement.

“Milan offers itself completely to welcome the world to our city. Expo Milano 2015 is designed to say to everyone on the planet that the hunger challenge can be beaten, that each of us can do something to stop the unsustainable exploitation of the planet. Come to Milan, we have organized over 20,000 events for you, and Milan will be home to all”.

The President of the Lombardy Region, Roberto Maroni, then took to the stage, and started by thanking all those who worked so hard to bring about Expo Milano 2015, and continued by saying: “All of us here feed the future. With the Universal Exhibition in Milan, the subject of food is at the center of the global debate on food security”. 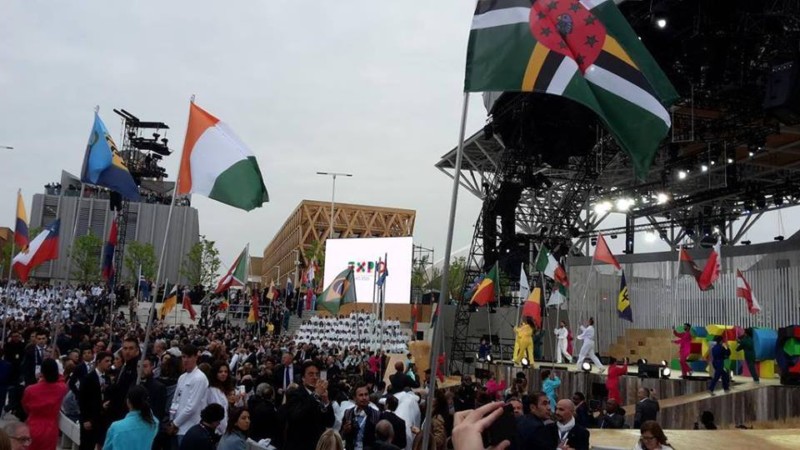 Another speaker was Ferdinand Nagy, President of the Bureau International des Expositions (BIE), the French international intergovernmental organization founded in 1928 that has since managed the Universal Expositions.

“I offer my sincere thanks to the Italian government for the dedication it has demonstrated in creating this event, in its cooperation with the Participating Countries and the Italian and foreign institutions”, said Nagy. “It will be an event that is remembered for overcoming the challenges related to nutrition and hunger in the world.”

Pope Francis: “We must globalize solidarity”

The opening ceremony continued with the highly anticipated speech by Pope Francis, delivered via a video link from the Vatican. 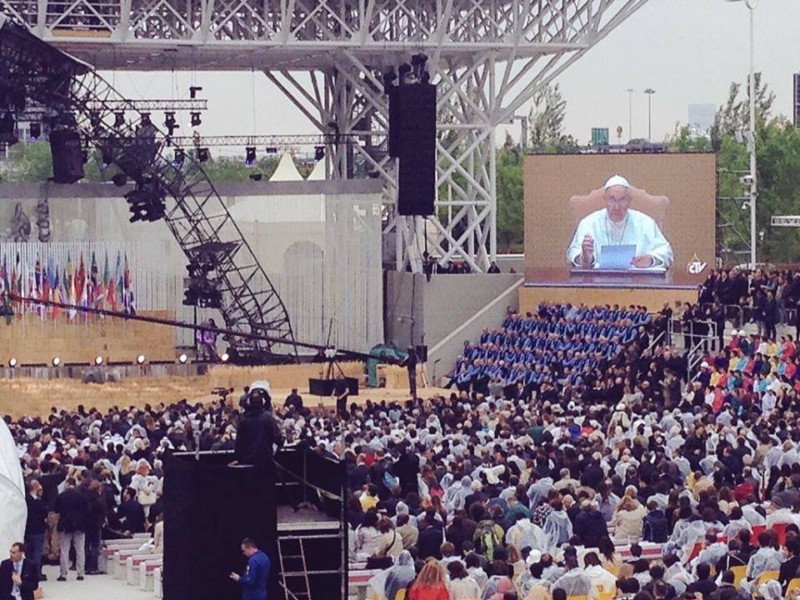 “Expo Milano 2015 is an opportunity to globalize solidarity. We must thank God for choosing this theme. The thousands of people who do not have enough to eat are the real stars of this event. Let us remember the words of John Paul XXIII, who said that the paradox of inequality still exists today and that we must stop abusing the garden that God has given us.”

The Pope wanted to celebrate May 1, remembering all the workers who have worked for the Universal Exhibition in Milan.

Following the Pontiff’s address, a delegation of workers carried the Italian flag onto the stage, accompanied by the Italian national anthem that concludes with the unusual, but auspicious words: “We are ready for life.”

The ceremony that officially marked the start of Expo Milano 2015 ended with an address by Italian Prime Minister Matteo Renzi , “Italy has awakened, we are ready for life,” stated the premier, referring back to the last line of the Italian national anthem.

“I would like to welcome everyone, and say thank you to all the workers,” said Renzi.

“Today, the future of a country with an extraordinary past begins, but also one that has a future that now embraces the world. Let’s show that Italy is proud of its roots, but also that our future is being written right now. Politics can no longer just take care of insiders. Let us make sure the Universal Exhibition in Milan is a place for discussion and solutions.”

In the acknowledgments made by the Prime Minister, Renzi recalled Letizia Moratti, the previous Mayor of Milan who,“first had the idea that Expo Milano 2015 could be a great opportunity for Italy”. The celebrations ended with Premier Renzi signing the Milan Charter, with the Frecce Tricolori, the Italian Air Force’s aerobatic team performing a fly-past over the Exhibition site at the end of his speech.

Joe Kleimanhttp://wwww.themedreality.com
Raised in San Diego on theme parks, zoos, and IMAX films, InPark's Senior Correspondent Joe Kleiman would expand his childhood loves into two decades as a projectionist and theater director within the giant screen industry. In addition to his work in commercial and museum operations, Joe has volunteered his time to animal husbandry at leading facilities in California and Texas and has played a leading management role for a number of performing arts companies. Joe previously served as News Editor and has remained a contributing author to InPark Magazine since 2011. HIs writing has also appeared in Sound & Communications, LF Examiner, Jim Hill Media, The Planetarian, Behind the Thrills, and MiceChat His blog, ThemedReality.com takes an unconventional look at the attractions industry. Follow on twitter @ThemesRenewed Joe lives in Sacramento, California with his wife, dog, and a ghost.
Share
Facebook
Twitter
Linkedin
Email
Print
WhatsApp
Pinterest
ReddIt
Tumblr
Previous articlePHOTOS: USA Pavilion Day Before Opening Milano EXPO 2015
Next articleEXPO 2015 Architecture: National Pavilions A-M