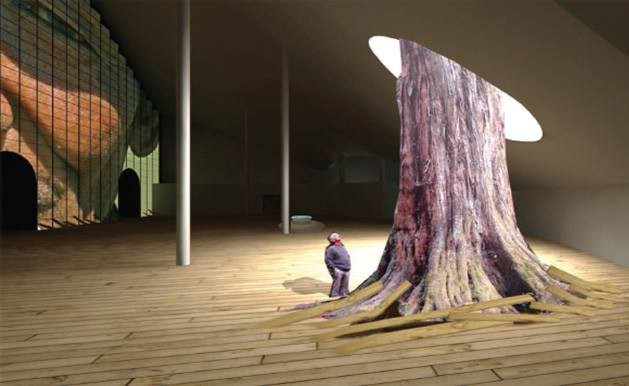 Milan, Italy — The following drone footage was shot on Monday, February 16, 2015.  EXPO Milano 2015, highlighting the importance of food to the planet, will run May 1 – October 31.

The drone begins its flight by the Open Air Theater, the largest outdoor theater that will host shows and events, of which you can see the first rows of seats, already placed. In the background, from left to right, you see the Chile Pavilion, Pavilion Austria and that of Slovenia. Finally one of the 11 Service Areas, already completed. Then there is a view from the Cocoa and Chocolate Cluster, of which we see the structural part, now completed, and the interior halls that will host Cameroon, Cote d ‘Ivoire, Cuba, Gabon, Ghana, Sao Tome. Following is a shot of the southern part of the Cardo: in the foreground, the white carpentry of the Italian Pavilion, where there will be the area called Fab Food, dedicated to the excellence of Italian food. Next, the white tents of the Thistle and in the background,  another wing of the Italian Pavilion, the spaces will be set up by Coldiretti. We then see the Mexico Pavilion, whose metallic infrastructures will soon be covered with sails up to take the form of corn.

This is followed by an overview of the area from the top of the corporate pavilions : in the foreground, the roof of the Coca-Cola pavilion and, after the Germany Pavilion, you’ll notice the Vanke Pavilion, red concrete, and the New Holland Pavilion, from its sloping roof. Then we have a great overview of the Cardo, the major pedestrian crossing which cuts from north to south through the Exhibition Site. The two-story structures in carpentry and white wood of the Italian Pavilion run to its side, while at the bottom stands Palazzo Italy, a concrete building designed by Studio Nemesis. The camera of the drone then lingers on the Belgium Pavilion. At this point you’ll notice the large wooden bodies that will then be covered with a glass dome, a project developing the link between sustainability created by Studio Patrick Genard & Associates. In the north east of the site are the first pictures of the Kip Pavilion, an independent non-profit organization that works with national governments, regional and local authorities, international organizations, universities, foundations and other public and private organizations, in order to promote training activities on the values ​​of the United Nations Millennium Platform.

In the central area, the drone is framing the progress of the Spanish Pavilion, of which one can see the wooden beams that support the main body, and the Hungary pavilion, with the geometry of the terminal parts that recall the shamanic drums, while the central part resembles the form of Noah’s Ark. The camera then captures the first images of the Tree of Life, which will be built in the middle of Lake Arena : when you see the circular structure of the steel sorreggerà tree, 35 meters high. The final shot is of the Palace Italy, where they have just finished installation of the windows on the north and east and the glass cover of the terrace on the top floor.

Joe Kleimanhttp://wwww.themedreality.com
Raised in San Diego on theme parks, zoos, and IMAX films, InPark's Senior Correspondent Joe Kleiman would expand his childhood loves into two decades as a projectionist and theater director within the giant screen industry. In addition to his work in commercial and museum operations, Joe has volunteered his time to animal husbandry at leading facilities in California and Texas and has played a leading management role for a number of performing arts companies. Joe previously served as News Editor and has remained a contributing author to InPark Magazine since 2011. HIs writing has also appeared in Sound & Communications, LF Examiner, Jim Hill Media, The Planetarian, Behind the Thrills, and MiceChat His blog, ThemedReality.com takes an unconventional look at the attractions industry. Follow on twitter @ThemesRenewed Joe lives in Sacramento, California with his wife, dog, and a ghost.
Share
Facebook
Twitter
Linkedin
Email
Print
WhatsApp
Pinterest
ReddIt
Tumblr
Previous articleLisa Deyo Joins IAAPA as Manager for Educational Programs
Next articleOnline Registration Now Open for 2015 Asian Attractions Expo