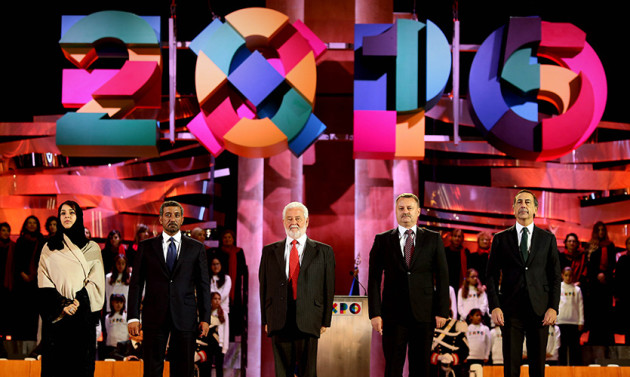 Milan, Italy (October 31, 2015) —“The challenge we set ourselves has been won. Now we are ready to leap forward.” With these words the President of the Italian Republic Sergio Mattarella announced the closure of Expo Milano 2015. “A new test is beginning for us, and this is how deciding how the site will be used. I am sure that we will make a wise choice that also involves our young people. No one will be allowed to come short of everything that Expo has created.”

The Universal Exposition of Milan has officially closed its gates. Together with President Mattarella, Mayor of Milan, Giuliano Pisapia, President of the Lombardy Region, Roberto Maroni, Commissioner of the Italian Pavilion, Diana Bracco, Secretary of the Bureau International des Expositions, Vicente Gonzales Loscertales, Minister of Agricultural, Food and Forestry Policies, Maurizio Martina, and the Sole Commissioner for the Government for Expo Milano 2015, Giuseppe Sala also participated in the ceremony. Sala announced that “in the six-month event in Milan, 21.5 million people visited the Universal Exposition.”

Expo Milano 2015, the satisfactions and the commitments

The authorities spoke one after another on the stage of the San Carlo Open Air Theater emphasizing the value of this Universal Exposition and the legacy that it will leave, not only to the forthcoming events, but in the conscience of all citizens. “This Exposition” stated Pisapia “has brought high levels of satisfaction to our Country by proposing itself as a departure point from which we must again begin to make our world more sustainable.”

“Today this great euphoria, satisfaction and pride” declared Maroni “shows that Italy has won its challenge.  The commitment that we must maintain from tomorrow onwards is that of continuing to make a meaningful contribution to the international community, but to do so each one of us must express the desire to defeat the hunger that is still affecting the populations of the Planet.”

Diana Bracco began her speech by stating “my task has been that of representing the system of Italy by involving all the players. The only way we can win is if we establish a system. Today we have achieved some important objectives and the essential one is to share a theme that is important for the future of the Planet on a global level.” Loscertales elaborated onBracco’s words by stating “that the success of this event has been due to its strong focus on debate and on international trade relations.”

“We can now finally say mission accomplished” began Minister Martina opening his speech during the closing ceremony of Expo Milano 2015. “We must be proud of our Country, because we have proved to the world that we are capable of meeting our objectives thanks to the cooperation of our populations, because our past remains strong if we are capable of opening up towards the future. The message of Expo Milano 2015 will walk all over the world on the legs of the millions of citizens who have visited this Exposition.” Giuseppe Sala stated that “5 million visitors passed through the turnstiles at Expo in the month of October alone. Today we can say that in the six months of the event in Milan, 21.5 million people visited the Universal Exposition. This can only confirm that together we have done an excellent job, leaving a deep mark on the consciences of our citizens.”

Food: a universal language that unites tradition and innovation

The Chorus of the Hebrew Slaves, sung by the choirs of S.Ilario of Rovereto, Brianza of Missaglia, Rifugio Città of Seregno, the Incanto Women’s Choir of Corsico, the Coro dei Piccoli Cantori from Milan and the children of the Scuola Rinnovata was a moving moment for the audience. Together with the official anthem of the BIE it preceded the closing speech delivered by President Mattarella. “With a touch of sadness for the conclusion of this important event, I can say that this will not be a farewell but a handover. The Charter of Milan has an important mission: to take the message of this Exposition, addressed to life and human rights, all over the world. With food we can promote the traditions of every single Country or combine history with the spirit of innovation and development for the future.”

The words of the President concluded the official closing ceremony of the Universal Exposition of Milan and an exciting show of fireworks and pyrotechnics excited and amazed an audience of spectators along the perimeter of the Open Air Theater.

Joe Kleimanhttp://wwww.themedreality.com
Raised in San Diego on theme parks, zoos, and IMAX films, InPark's Senior Correspondent Joe Kleiman would expand his childhood loves into two decades as a projectionist and theater director within the giant screen industry. In addition to his work in commercial and museum operations, Joe has volunteered his time to animal husbandry at leading facilities in California and Texas and has played a leading management role for a number of performing arts companies. Joe previously served as News Editor and has remained a contributing author to InPark Magazine since 2011. HIs writing has also appeared in Sound & Communications, LF Examiner, Jim Hill Media, The Planetarian, Behind the Thrills, and MiceChat His blog, ThemedReality.com takes an unconventional look at the attractions industry. Follow on twitter @ThemesRenewed Joe lives in Sacramento, California with his wife, dog, and a ghost.
Share
Facebook
Twitter
Linkedin
Email
Print
WhatsApp
Pinterest
ReddIt
Tumblr
Previous articleSplashworld Provence Opens Featuring Polin Waterslides
Next articleUAE Celebrates National Day at EXPO Milano as It Prepares to Host Expo 2020 Dubai