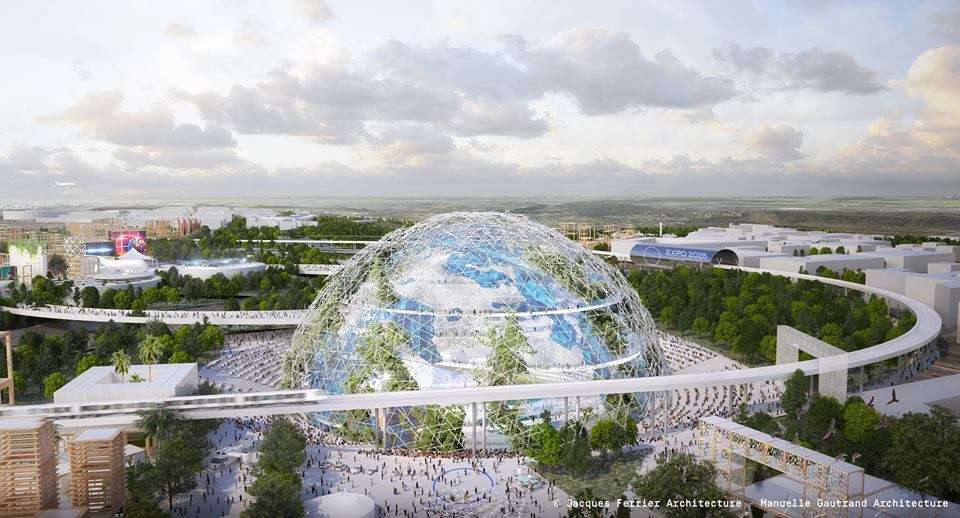 Paris, France (January 22, 2018) — EXPOFRANCE 2025 Chairman Jean-Christophe Fromantin, partners of the EXPOFRANCE 2025 Committee, and its supporters, denounced the decision of French Prime Minister Edouard Philippe to withdrawal the candidacy of France.

Following the Prime Minister’s announcement of the abandonment of the candidacy of France for the Universal Exhibition of 2025, Jean-Christophe Fromantin, Chairman of the Committee EXPOFRANCE 2025, surrounded by partners and supporters of this project which they have been working on for more than seven years, held a press conference today to counter what they consider false allegations and to denounce the methods used by Matignon.

According to EXPOFRANCE 2025, the plan utilizes a 100% private, strong and innovative economic model with no impact on public finances, contrary to what Matignon has asserted. While the economic scheme has been specially designed not to engage public finances, arguments by the Prime Minister to abandon this project question that fact.

The economic model is based on a dual valuation: the ability to back up the investments and ticket sales to finance the operation. In both cases, calculation assumptions were built in agreement with the state services, together with the companies, presented in the application file submitted on September 28 to the International Bureau of Exhibitions by the French State.

According to Jean-Christophe FROMANTIN, Chairman of the EXPOFRANCE2025 Committee, “the arguments put forward by Matignon are fake. It is precisely because we were concerned about public spending that we have, from the beginning, built this private model that appealed to many economic partners. Such analysis should be required at all major international events that France organizes.

“The way in which this withdrawal was announced unilaterally by the Prime Minister reflects a vis-à-vis contempt of all those who have been invested since 2011 in this project. It was through the Sunday Journal that I learned the news Saturday night, followed by a call from the Prime Minister’s Office. Edouard Phillippe did not devote even a few minutes to share his position with me.

“The ruffians of Notre Dame des Landes receive more respect than all those who took risks, who have undertaken and invested so that France has an appointment with the world! Behind this bid, there are hundreds of young people, companies, local elected officials, parliamentarians and thousands of French people who have embarked on this adventure and who are now questioning the meaning of this renunciation and contempt posted for them, those who want to act for their country.”

The decision to withdraw is all the more surprising because it comes just after the Interminsterial Tourism Committee, chaired by Edouard Phillippe presented on the theme of the attractiveness of the territories.

This is a considerable disappointment for Greater Paris, Paris-Saclay, as for the 17 territories participating throughout France who had hoped for great prospects in 2025. In work coordinated by the economist Christian de Boissieu, the Expo will result in nearly 23 billion euros in benefits, 0.5 points of growth, with more than 130,000 sustainable jobs expected.

“While the President preaches a France that shines who wins, how can such a decision reasonably be taken? What credit to give to the word of the State after this new renunciation?” asked Jean-Christophe Fromantin. “These are beurocratic choices that neutralize the political and entrepreneurial drive of France. In a few weeks, we will present a plan for the International Exhibition faithful to the spirit of innovation, of daring and creativity similar to that which France had been able to pull off in the 19th century, when engineers and artists were at the helm of these great events with the world.”

Since Saturday evening, the EXPOFRANCE 2025 Committee has received hundreds of messages of support.

The misunderstanding of the declaration of abandonment of the project is shared by elected representatives. Former Prime Minister Manuel Valls states: “the project of Universal Exhibition 2025 did not commit to using public money, elected officials do not understand this brutal decision, which puts a blow to the effort by stopping many projects and damaging the image of France.”

Senator Bruno Retailleau states: “The decision to abandon the World Expo is brutal and incomprehensible. Its economic model was not based on public subsidies.”

Mayor of Reims Arnaud Robinet states he is “disappointed for France, for Reims and our territory and for all those who have been mobilized [to work on the Expo].”

Joe Kleimanhttp://wwww.themedreality.com
Raised in San Diego on theme parks, zoos, and IMAX films, InPark's Senior Correspondent Joe Kleiman would expand his childhood loves into two decades as a projectionist and theater director within the giant screen industry. In addition to his work in commercial and museum operations, Joe has volunteered his time to animal husbandry at leading facilities in California and Texas and has played a leading management role for a number of performing arts companies. Joe previously served as News Editor and has remained a contributing author to InPark Magazine since 2011. HIs writing has also appeared in Sound & Communications, LF Examiner, Jim Hill Media, The Planetarian, Behind the Thrills, and MiceChat His blog, ThemedReality.com takes an unconventional look at the attractions industry. Follow on twitter @ThemesRenewed Joe lives in Sacramento, California with his wife, dog, and a ghost.
Share
Facebook
Twitter
Linkedin
Email
Print
WhatsApp
Pinterest
ReddIt
Tumblr
Previous articleAngus Jenkins Headed to Six Flags from Chance Rides
Next articleRicardo Tonding Etges Joins Vekoma as Global Business Development Manager