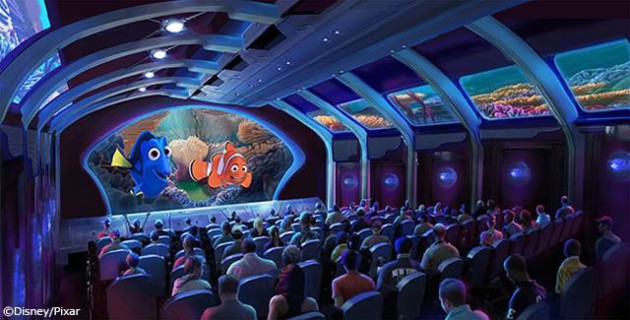 Urayasu, Chiba, Japan (May 19, 2015) — Oriental Land Co., Ltd. announced that a new attraction will open in Port Discovery at Tokyo DisneySea Park in spring 2017. The new attraction will be themed to the world of the Disney/Pixar films Finding Nemo and Finding Dory (to be released in 2016). This indoor attraction will immerse Guests in the underwater world of these popular stories by using a ride system that seamlessly blends visuals from the films with a motion system.

Boarding a submarine that “shrinks” to the size of a fish, Guests can explore the vast underwater world from the same point of view as Nemo and Dory. Guests can meet different characters and make new discoveries when they ride.

In addition, the production staff of Finding Dory (to be released in July 2016) will be involved in the creation of visuals for this attraction. Beautiful ocean scenery can be enjoyed on screen in this attraction.

With the opening of this attraction, StormRider will close permanently around mid-May 2016.

Joe Kleimanhttp://wwww.themedreality.com
Raised in San Diego on theme parks, zoos, and IMAX films, Joe Kleiman would expand his childhood loves into two decades as a projectionist and theater director within the giant screen industry. In addition to his work in commercial and museum operations, Joe has volunteered his time to animal husbandry at leading facilities in California and Texas and has played a leading management role for a number of performing arts companies. Joe has been News Editor and contributing author to InPark Magazine since 2011. HIs writing has also appeared in Sound & Communications, LF Examiner, Jim Hill Media, and MiceChat. His blog, ThemedReality.com takes an unconventional look at the attractions industry. Follow on twitter @ThemesRenewed Joe lives in Sacramento, California with his fiancé, two dogs, and a ghost.
Share
Facebook
Twitter
Linkedin
Email
Print
WhatsApp
Pinterest
ReddIt
Tumblr
Previous articleCBRE Lists 60.8 Acre Parcel Including Former Proposed Sites of Las Ramblas Resort and W Las Vegas
Next articleHacker Group Anonymous Claims Break In of EXPO Milano 2015 Ticketing System