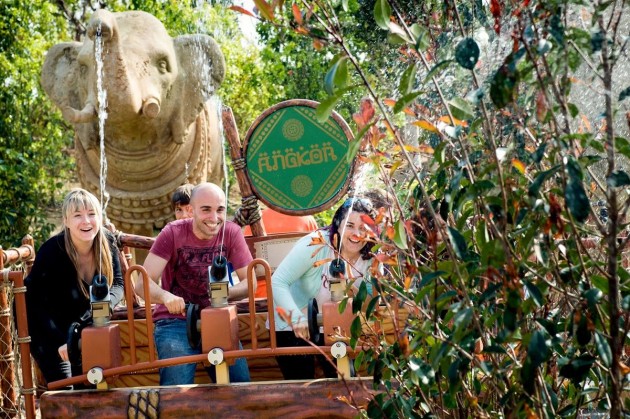 [quote]It’s been a really thrilling summer for us and we’re delighted to see so many of our clients succeeding and flourishing.  These destinations continue to innovate and evolve year after year to remain leaders in their industries, and it’s an honor to be a part of that vision.” — PGAV Destinations principal and chair Mike Konzen. [/quote]

For the second year in a row, Discovery Cove was voted the number one amusement park in the world in the 2014 TripAdvisor’s Travelers’ Choice Awards, topping the likes of Universal’s Islands of Adventure and Disney’s Magic Kingdom, Hollywood Studios, Disneyland, and Animal Kingdom. Since opening in 2000, the PGAV master-planned and designed destination offers 1,300 guests per day a one-of-a-kind experience where they can touch and swim with dolphins, wade with rays, snorkel amongst thousands of exotic fish, and relax on pristine beaches. “There aren’t enough words to express how wonderful of a time I had at Discovery Cove. Not only was I absolutely treated like royalty, but everyone with me was blown away by the amazing service and absolutely enjoyable experience. The animal encounters were like being in a dream, the grand reef was mind blowing,” said user Kitcatsheart recently on TripAdvisor.

Consistently winning awards year after year, the Georgia Aquarium was voted the Best North American Aquarium in USA Today’s “10Best Readers’ Choice Awards,” beating out 20 additional nominees. The PGAV-designed destination stands as the third-largest aquarium in the world and still the only aquarium in the western hemisphere where guests can view live whale sharks, since opening in 2005.

When Angkor: Adventure in the Lost Kingdom opened this summer at Port Aventura in Salou, Spain, it set the world record for longest interactive boat ride. It didn’t take long for the new attraction to win a European Star Award as first place in “Europe’s Best Family Ride.” The attraction takes guests on a winding path through a lost jungle as they encounter animals, villagers, and each other in a rich, Angkor Wat-inspired environment. The award will be received this September at IAAPA Amsterdam.

Having just opened in summer 2012 at the Kennedy Space Center Visitor Complex in Florida, Space Shuttle Atlantis received the American Alliance of Museums’ top Muse Award this summer in the Multimedia Installations category. Master planned and designed by PGAV Destinations, Space Shuttle Atlantis tells the epic, 30-year story of the Space Shuttle Program and stars Atlantis, one of only three remaining space-flown orbiters, and the last to fly in space.

Joe Kleimanhttp://wwww.themedreality.com
Raised in San Diego on theme parks, zoos, and IMAX films, InPark's Senior Correspondent Joe Kleiman would expand his childhood loves into two decades as a projectionist and theater director within the giant screen industry. In addition to his work in commercial and museum operations, Joe has volunteered his time to animal husbandry at leading facilities in California and Texas and has played a leading management role for a number of performing arts companies. Joe previously served as News Editor and has remained a contributing author to InPark Magazine since 2011. HIs writing has also appeared in Sound & Communications, LF Examiner, Jim Hill Media, The Planetarian, Behind the Thrills, and MiceChat His blog, ThemedReality.com takes an unconventional look at the attractions industry. Follow on twitter @ThemesRenewed Joe lives in Sacramento, California with his wife, dog, and a ghost.
Share
Facebook
Twitter
Linkedin
Email
Print
WhatsApp
Pinterest
ReddIt
Tumblr
Previous articleDubai to Host 2015 IAAPA Leadership Conference
Next articleApex Parks Group Acquires Fourteen FEC’s and One Waterpark from Parques Reunidos Subsidiary Palace Entertainment