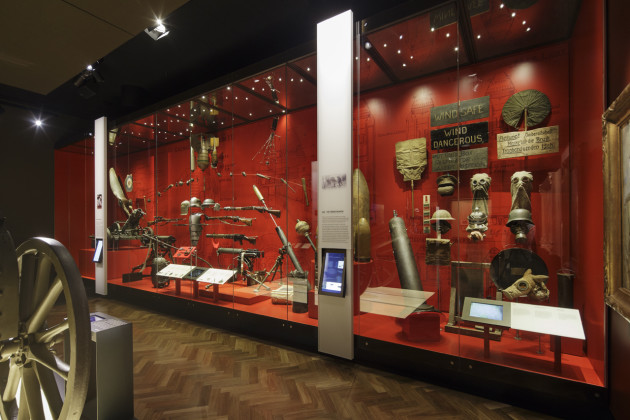 Valencia, CA, USA — The renewed First World War Galleries of the Australian War Memorial in Canberra opened to the public in December 2014, with a new lighting design by Benjamin Cisterne that makes extensive use of customized LED lighting fixtures from Gantom Lighting & Controls (formerly Darklight: Precision Lighting System) to illuminate both the historic dioramas and the display cases.

Going to USITT ’15 in Cincinnati March 18-21? Check out Gantom’s display at booth #2320 – a scale visualization method in collaboration with LIGHTBOX and RC4 Wireless.

“The Australian War Memorial (AWM) is one of the most visited places in the country,” said Cisterne, whose company Benjamin Cisterne Design was subcontracted to exhibition designer Cunningham Martyn Design (CMD). “The First World War Galleries had not had much done to them since the 1970s and were in need of a revamp.” Australia in the Great War, in the Galleries, is said to be one of the most significant First World War exhibitions in the world, drawing on the Memorial’s unique collection of First World War artifacts, technology, uniforms, medals, photographs, film, and personal items such as letters and diaries.“Over the past years, demand for Gantom products, among museums and unique exhibits around the world, has steadily increased. This is due to the modularity and versatility of the lighting products we make,” said Gantom president Quan Gan. “It’s thrilling to see a gifted lighting designer such as Benjamin Cisterne apply his vision with our lighting products in this outstanding exhibition venue.”

For the display cases, Cisterne sought an alternative to traditional tungsten lighting. He approached Barbizon Lighting to help him identify LED options that were compact, state-of-the-art, powerful, and could be mounted in a variety of ways. “After reviewing several manufacturers we elected to go with Gantom as they had a more complete and finished offering of products that were plug-and-play and had excellent optical properties,” said Paul Lewis, system sales, Barbizon Australia Pty Ltd.

The new diorama lighting uses 120 Gantom DMX Dynamic White Flood and 120 Gantom DMX RGBW Flood fixtures. The display cases use over 1000 Gantom Precision Z Spot and Flood fixtures ranging from 3000K to 4000K with custom glass-top mounts designed to conceal the fixtures.Lighting the dioramas called for fixtures that combined theatricality with durability. “My background is in theatre design and one of the things that people come to me for is to bring something of that to museums – not just to illuminate the objects but to employ a level of interpretation in the design,” said Cisterne. “I had used Gantom fixtures previously on some smaller projects and been impressed. They are well-built, which gives confidence to put them into a project that needs to exist for 20 years or more and at the same time the fixture is as flexible as that found in a theatre. The color-ability of the Gantom DMX range and the direct-ability of the Precision range just outdoes anything else on the market at that size and price mark.”

Roughly half the lighting fixtures on the project were manufactured by Gantom, and all of the Gantom units were installed by Cisterne’s team. ODG and BUILT were the main contractors for the electrical install. “Using DMX native fixtures made this a complete and versatile system, and made integration a breeze,” said Cisterne.

Compactness and versatility
Gantom’s Precision Z fixtures afforded Cisterne the flexibility he sought for the display cases. “They made it possible to give each displayed item an individual focus that best defines its shape, colors and place in the story,” he said. “The cases range in size as do the objects on display, and the types of material range from metal to paper to fabric prints and wooden artifact.” The compactness of the fixtures provided an additional benefit of saving space.

“The units reduced the overall size of cavities required above cases,” said Cisterne, “and the variance in beam angle was very useful for getting light into the right places inside the cases. The very narrow units are great for shooting a spot far down onto a small object or text at the base of a case and the wide floods are brilliant for washing a background. The units dim really well and the color temperature remains at low brightness. This is especially useful when lighting a paper object next to a metal one.”

For the beloved dioramas the selected Gantom fixtures supplied the range Cisterne required to meet the design challenge – to “give them a new vibrancy” and fulfill guest expectations. “The dioramas are well known and treasured by visitors internationally,” he said. “It was essential for me to get these right. The Gantom fixtures enabled us to focus and color a theatrical scene for each that has reference to place and time of day, and conveys the mood of the imagery. Two of the dioramas have digital backdrops that cycle through a timed sequence. The Gantom fixtures allowed us to create dynamic lighting effects for those scenes.”

Collaboration and innovation
To realize the lighting design vision required extensive collaboration between Cisterne and CMD, the Museum, Barbizon and the display case manufacturer, Designcraft. “Working with CMD for more than 10 years, we have developed a distinctive design style,” said Cisterne. “I was directed by their designers and asked to add additional ideas.” Part of Cisterne’s process is to fully learn the needs of the end user. “The team of technicians who will inherit the system – in this case, at the Australian War Memorial – will have an influence on my choices, as I find this to best aid the design for its long future.”

Said Cisterne, “I needed to mount the Precision Z fixtures above glass in a way that I used to do with older MR16 fixtures. I drew up a new mount for the Precision range, and Barbizon and Gantom had it prototyped and eventually built for the project. This is the kind of collaboration we desire as designers collaborating with suppliers and manufacturers.” The new custom glass top display case mount is now part of Gantom’s standard product line.

“It was an honor to be a part of this amazing project and to work with designers and system integrators who understand the technology and were able to give us a well-defined set of requirements,” said Gan. “What drives us at Gantom is seeing our products and efforts enabling the creative genius of designers and being a part of the magic they create.”Barbizon developed and manufactured locally a cowling for the new mount, as well as a rail clip for mounting the fixtures to a rail system. These collaborations resulted in specifications and prototypes for custom plug-and-play cabling and mounting accessories that were then manufactured by Gantom. “We turned the Gantom range of fixtures into a full-fledged museum and gallery lighting system,” said Lewis.

Joe Kleimanhttp://wwww.themedreality.com
Raised in San Diego on theme parks, zoos, and IMAX films, InPark's Senior Correspondent Joe Kleiman would expand his childhood loves into two decades as a projectionist and theater director within the giant screen industry. In addition to his work in commercial and museum operations, Joe has volunteered his time to animal husbandry at leading facilities in California and Texas and has played a leading management role for a number of performing arts companies. Joe previously served as News Editor and has remained a contributing author to InPark Magazine since 2011. HIs writing has also appeared in Sound & Communications, LF Examiner, Jim Hill Media, The Planetarian, Behind the Thrills, and MiceChat His blog, ThemedReality.com takes an unconventional look at the attractions industry. Follow on twitter @ThemesRenewed Joe lives in Sacramento, California with his wife, dog, and a ghost.
Share
Facebook
Twitter
Linkedin
Email
Print
WhatsApp
Pinterest
ReddIt
Tumblr
Previous articleNational Museum of the US Airforce to Close Presidential Displays and Air Force One in Preparation for Move to New Building
Next articlePHOTOS: Fireman’s Landing at Silver Dollar City