Gantom Turns the Lights Out at Knott’s Scary Farm 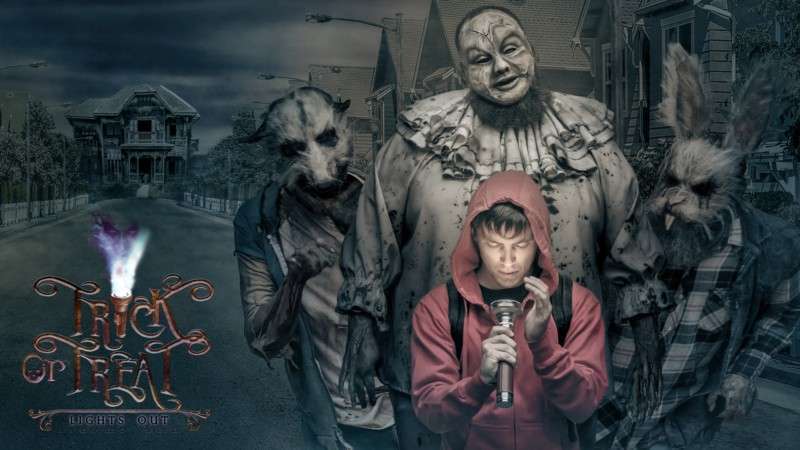 A new take on a classic haunt premiered at Knott’s Scary Farm this year – Trick-or-Treat: Lights Out. Armed with what appears to be a faulty flashlight, unsuspecting trick-or-treaters enter the haunted home of the Green Witch and plunge into terrors amid total darkness.

This year’s Trick or Treat maze features new, state-of-the-art effects and high-impact scares. Lights Out uses Gantom Lighting & Controls‘ Torch Technology powered flashlight- a specially made, programmable, IR (infrared)-powered device; the flashlights both receive and transmit IR, allowing each guest’s experience in the maze to change based on where they point the beam of light.

The combination of a top-tier maze, total darkness, and the flashlight are what make Trick or Treat a unique haunt experience, offering a mélange of fear, anxiety, shock, horror, and a rising sense of urgency to find one’s way out.

Knott’s Scary Farm’s Trick or Treat maze debuted in 2012 and is its oldest maze. Ken Parks, Vice President of Entertainment, and Jon Cooke, Entertainment Designer at Knott’s, sat down earlier this year to consider whether to discontinue the maze. “It’s a fan favorite and we didn’t want to give it up,” said Cooke. “So we started looking at what we could do to change it up. That’s when we came across Gantom’s Torch Technology.”

The maze opened this season as ‘Trick or Treat: Lights Out.’

“It puts the guests into a spot where they’re a character in the attraction,” Cooke Commented.

“We’re just seeing the beginning of being able to use technology to create these larger, immersive environments,” said Parks. “We’ll be leaning into technology but not losing what made us famous, which is a simple, tactical scare.”

Gantom founder Quan Gan explains how the Torch Technology powered flashlight works: “What we’re doing is taking decades-old IR technology that’s in everybody’s remote control and we’re incorporating it into various forms of interaction. What you see at Knott’s is only one iteration of that, one manifestation of a guest walking through a scene and being able to trigger effects. Torch technology is a communication technology among multiple points, multiple people, and people and scenery.

“The Torch isn’t limited to any form factor. We happened to make the flashlight form factor because it was the best fit, thematically, for a haunted house setting. We can incorporate it into virtually anything.”

Joe Kleimanhttp://wwww.themedreality.com
Raised in San Diego on theme parks, zoos, and IMAX films, InPark's Senior Correspondent Joe Kleiman would expand his childhood loves into two decades as a projectionist and theater director within the giant screen industry. In addition to his work in commercial and museum operations, Joe has volunteered his time to animal husbandry at leading facilities in California and Texas and has played a leading management role for a number of performing arts companies. Joe previously served as News Editor and has remained a contributing author to InPark Magazine since 2011. HIs writing has also appeared in Sound & Communications, LF Examiner, Jim Hill Media, The Planetarian, Behind the Thrills, and MiceChat His blog, ThemedReality.com takes an unconventional look at the attractions industry. Follow on twitter @ThemesRenewed Joe lives in Sacramento, California with his wife, dog, and a ghost.
Share
Facebook
Twitter
Linkedin
Email
Print
WhatsApp
Pinterest
ReddIt
Tumblr
Previous articleWorld Waterpark Association Show Concludes Successful Run With More Than 1400 in Attendance
Next articleSeaWorld Orlando Announces 2018 Events