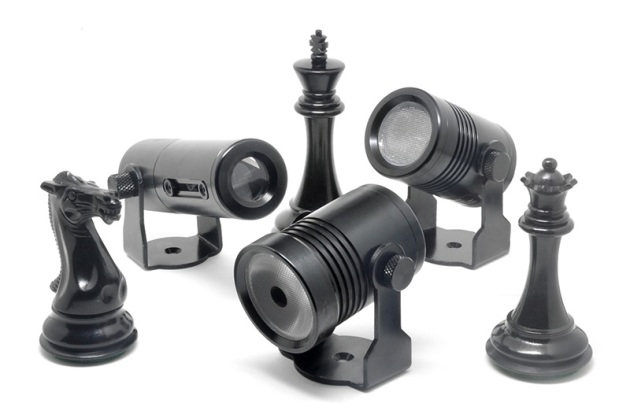 Valencia, CA, USA  (Oct 31, 2014) – Darklight Precision Lighting System announced the company’s name change to Gantom Lighting & Controls. Gantom is now a global company with representation in Europe, Australia, Japan, Hong Kong, Korea and Canada in addition to its established network of representatives and dealers throughout the US. The company has launched a new website at www.gantom.com.

Darklight began as a manufacturer and supplier of compact LED fixtures to haunted attractions and dark rides in 2010. Founders Quan Gan and his wife Charlie Xu, having operated a successful haunted attraction the prior year, faced many challenges using the available lighting technology that mostly catered to larger and brighter applications. Along with their close friend and multi-talented engineer Jerry Dong, the trio set out to develop Darklight: a versatile and compact lighting product line that was high quality and durable while still being affordable. The progression from napkin sketches in a coffee shop to exhibiting fully functional prototypes at their first tradeshow took less than 3 months. This fast paced development cycle remains a core strength of their business to this day. Now carrying the torch as Gantom, the company will continue branching out to serve the architecture, museum, theme park and theater industries with an ever increasing range of innovative, professional grade products.

Gantom is a portmanteau of “Gan,” the last name of a co-founder, and “phantom” in a salute to the company’s origins in the Halloween attraction business. The rebrand marks a milestone and pivotal year of not only business growth but also personal growth as Gan and Xu are expecting their first child this December.

At the LDI show in Las Vegas Nov 17-23, booth #1665, Gantom will display its established Precision product line while introducing two new products in its premium Gantom line: the Gantom One pinspot and the DMX Programmer app for the iPhone. “We hope that both of these new products will become ubiquitous and ingrained into the vocabulary of lighting professionals,” said Gan. 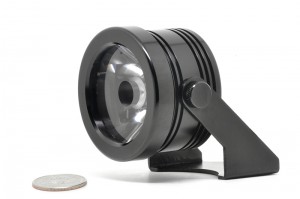 Gantom One is an LED-based rethink of the standard pinspot fixture that is a mainstay of event lighting. Compared to a traditional pinspot, the Gantom One is smaller, lighter, more energy efficient and offers superior optics. It is hockey-puck sized instead of football-sized, and draws about one-eighth as much power; 4 watts as opposed to 30 watts. Because it uses LEDs the need for lamp replacement is completely eliminated. “They take up less space in inventory and can be easily transported in a small hard case, whereas your traditional bar of 8 pinspots on a giant rack calls for a truck,” said Gan. “For a large event using one per table, it can really add up.” The Gantom One also features an innovative magnetic accessory mounting system that allows the user to easily adjust the optics as needed. 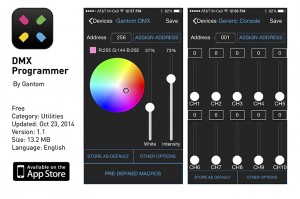 Gantom’s new DMX Programmer app uses the iPhone hardware (Android version to follow soon) to replace an earlier, 4-button device called the DarkBox Programmer which configured addresses and presets for Gantom’s DMX lighting fixtures. The new app offers a more user friendly touch interface to all compatible fixtures shipping from the factory beginning Q4. It is available as a free download from the App Store. “As we continue to launch new products, it just made more sense to take advantage of established mobile hardware to control them,” said Gan. The DMX Programmer app uses a patent pending technology that encodes control signals over the mobile device’s audio port directly to the controlled fixture.

Infrared applications with Disney and BlinkFX 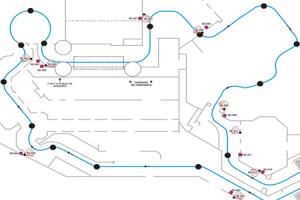 As a licensed manufacturer of devices that feature Disney’s SyncLink Technology, Gantom’s IR Mini-Emitters help enhance the experience of hearing- and visually-impaired theme park visitors as well as foreign guests needing translational services. Handheld and head worn devices, currently in use at several Disney parks, deliver content such as captions and audio descriptions on cue when triggered by proximity to the IR Mini-Emitters. The products have also been licensed and are in use at several national parks and museums.

Gantom envisions this technology being applied for other purposes in the near future such as safety and maintenance protocols and in rides and attractions, but also in non-entertainment sectors such as manufacturing. Get more information at Disneysynclink.com.

In another partnership with BlinkFX, Gantom is developing IR emitters for mobile and wearable devices with built-in, DMX controllable LEDs. The devices have a myriad of possible form factors and applications in entertainment, theater, events and attractions. The IR emitters can be hidden in key locations to trigger special lighting effects on these wearable LEDs. The BlinkFX devices are currently popular as wristbands worn by audience members at various musical events and corporate parties, producing effects synchronized to music. Get more information a at BlinkFX.com.

Joe Kleimanhttp://wwww.themedreality.com
Raised in San Diego on theme parks, zoos, and IMAX films, Joe Kleiman would expand his childhood loves into two decades as a projectionist and theater director within the giant screen industry. In addition to his work in commercial and museum operations, Joe has volunteered his time to animal husbandry at leading facilities in California and Texas and has played a leading management role for a number of performing arts companies. Joe has been News Editor and contributing author to InPark Magazine since 2011. HIs writing has also appeared in Sound & Communications, LF Examiner, Jim Hill Media, and MiceChat. His blog, ThemedReality.com takes an unconventional look at the attractions industry. Follow on twitter @ThemesRenewed Joe lives in Sacramento, California with his fiancé, two dogs, and a ghost.
Share
Facebook
Twitter
Linkedin
Email
Print
WhatsApp
Pinterest
ReddIt
Tumblr
Previous articleDesigning for bears, dogs, lemurs, humans, and other living things
Next articleVIDEO: New Plans for Paramount Park London Unveiled for Local Residents to Offer Feedback