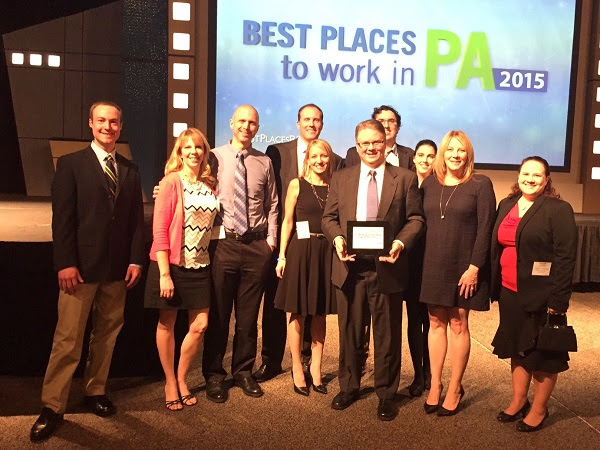 ABOVE: Gateway Ticketing Systems is named one of the Best Places to Work in PA for the fourth consecutive year. President and CEO Michael Andre, center holding plaque, and members of the Gateway team accepted the honor on behalf of the company at an awards ceremony in Lancaster.

Gilbertsville, PA, USA — On December 2nd, Gateway Ticketing Systems was named one of the 100 Best Places to Work in PA for the fourth consecutive year. Gateway ranked #64 and was recognized at an awards banquet at the Lancaster County Convention Center.

To be eligible as a Best Place to Work, companies must be for-profit or not-for-profit, publicly or privately held, operate a facility in Pennsylvania, have at least 25 employees and be in business for a minimum of one year. The award was designed to identify, recognize and honor the best places of employment in Pennsylvania that are benefiting the State’s economy and its workforce.

The evaluation process has two parts: an employer benefits & policies questionnaire and an employee engagement & satisfaction survey that focuses on categories including leadership, company culture, training and development, role satisfaction, and pay and benefits.

The combined scores determine the top companies and the final ranking. This year, 74 small/medium-sized firms with 25-250 employees and 26 large-sized companies with over 250 employees were recognized.

Team Pennsylvania is the lead sponsor along with the Department of Community and Economic Development, a founding partner of Best Places to Work. The Central Penn Business Journal also participated in the announcement of the 100 Best Places to Work during the event.

Joe Kleimanhttp://wwww.themedreality.com
Raised in San Diego on theme parks, zoos, and IMAX films, Joe Kleiman would expand his childhood loves into two decades as a projectionist and theater director within the giant screen industry. In addition to his work in commercial and museum operations, Joe has volunteered his time to animal husbandry at leading facilities in California and Texas and has played a leading management role for a number of performing arts companies. Joe has been News Editor and contributing author to InPark Magazine since 2011. HIs writing has also appeared in Sound & Communications, LF Examiner, Jim Hill Media, and MiceChat. His blog, ThemedReality.com takes an unconventional look at the attractions industry. Follow on twitter @ThemesRenewed Joe lives in Sacramento, California with his fiancé, two dogs, and a ghost.
Share
Facebook
Twitter
Linkedin
Email
Print
WhatsApp
Pinterest
ReddIt
Tumblr
Previous articleMorgan’s Wonderland Starts Construction on World’s First “Ultra-Accessible” Splash Park
Next articleGSCA Announces 2016 Board of Directors