Gaylord Rockies to Include Indoor and Outdoor Waterpark 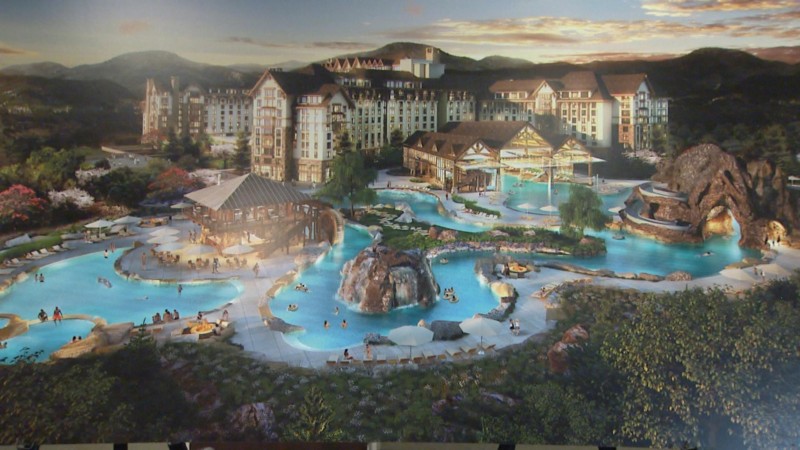 [quote]The Gaylord Rockies will bring in more than $8.2 billion in economic benefits to Colorado over the next 30 years. The Hyatt House Denver Airport, as well as additional hotels we manage in Denver and the region, will stand to receive a share of these new dollars to Colorado by overfill and tourism spending. — Dan Fay[/quote]Aurora, CO, USA — RIDA Development Corporation, the developer of the 1,500-room Gaylord Rockies in Aurora 2014, has announced that that the hotel and conference center will include an indoor/outdoor Rocky Mountain recreational waterpark experience to be enjoyed by hotel guests year-round.

The waterpark will make the Gaylord Rockies one of the first Four Diamond Hotels with a year-round waterpark in the region. The complex will boast multiple pools and waterslides, including a family play zone, two water slides, a lazy river, and a Colorado ‘hot springs’ experience. RIDA made the announcement to more than 100 business, civic and government leaders at a press conference at the Hyatt House Denver Airport today.

“The new amenities will offer another reason for guests and their families to extend their stay beyond official conference dates,” stated project developer, Ira Mitzner, President of RIDA Development Corporation. “This will give the Gaylord Rockies and Colorado another amenity to attract the more than 300 groups that rotate through Gaylord properties on an annual basis.”

Also present at the February announcement was the construction and design team of the Gaylord Rockies project including the general contractor, Mortenson Construction and architect, HKS, Inc.

“This project will create more than 10,000 construction jobs and 1,550 permanent, direct jobs,” stated Maja Rosenquist, Vice President and General Manager of Mortenson Construction. “Mortenson is proud to be part of the Gaylord Rockies construction and design team.”

“Our Denver office will be designing the architectural elements of the new Gaylord Rockies Hotel and Conference Center,” said Nunzio DeSantis, Executive Vice President, Director, HKS, Inc. “This will be a monumental project of 1.9 million square feet on 85 acres that will attract more than 450,000 net new visitors to the state each year.”

“My firm is interested and qualified in competing for a contract on this project,” said John Moore, Principal/Director of Civil Engineering of Martin/Martin Consulting Engineers. “This is a great opportunity for our industry and small businesses in Colorado.”

“This is a huge win for the state of Colorado,” said Dan Fay, President of Commonwealth Hotels, the management company of the Hyatt House Denver Airport. ”

Joe Kleimanhttp://wwww.themedreality.com
Raised in San Diego on theme parks, zoos, and IMAX films, InPark's Senior Correspondent Joe Kleiman would expand his childhood loves into two decades as a projectionist and theater director within the giant screen industry. In addition to his work in commercial and museum operations, Joe has volunteered his time to animal husbandry at leading facilities in California and Texas and has played a leading management role for a number of performing arts companies. Joe previously served as News Editor and has remained a contributing author to InPark Magazine since 2011. HIs writing has also appeared in Sound & Communications, LF Examiner, Jim Hill Media, The Planetarian, Behind the Thrills, and MiceChat His blog, ThemedReality.com takes an unconventional look at the attractions industry. Follow on twitter @ThemesRenewed Joe lives in Sacramento, California with his wife, dog, and a ghost.
Share
Facebook
Twitter
Linkedin
Email
Print
WhatsApp
Pinterest
ReddIt
Tumblr
Previous articleOregon Zoo Opens First Phase of Revolutionary Elephant Habitat
Next articleMarvel Villain Loki Takes on Comic Book Heroes in Marvel Universe LIVE! Arena Show