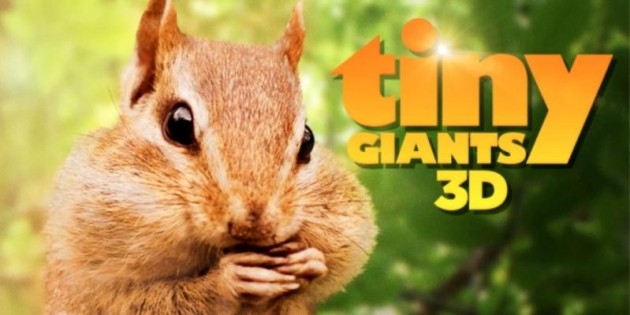 Evanston, IL, USA (Sept. 18, 2014) – BBC Earth and Giant Screen Films are proud to announce that the BBC Earth’s first two giant screen releases will be showcased at the GSCA conference in Toronto this weekend.  The two films, Walking with Dinosaurs: Prehistoric Planet 3D and Tiny Giants 3D, will be screening at the Scotia Bank IMAX Theatre on Saturday, September 20th.

“GSF screened both Prehistoric Planet and Tiny Giants at its private company event in mid-August, and the reception by the giant screen theaters in attendance was overwhelmingly positive, said Don Kempf, President Giant Screen Films.  “Both films reflect the creative filmmaking and high production values that have been the BBC’s hallmark for decades.”

Neil Nightingale, Creative Director for BBC Earth said, “Creating our first giant screen features has been a fascinating challenge.  The size of the canvas allows us to really bring the audience into the world of the film;  you’re diving into burrows and walking in the footsteps of dionsaurs.  These are vivid encounters that bring visitors face to face with tiny heroes and prehistoric marvels in a way that we hope will ignite imaginations.  I’m looking forward to sharing our work with the giant screen community in Toronto.”

“The heart of the institutional programming for the giant screen is documentaries,” said Diane Carlson, Vice President of Guest Services and Theaters at the Pacific Science Center in Seattle. “BBC Earth joining the giant screen filmmaking community is a wonderful addition and I look forward to their contributions.”

Walking with Dinosaurs: Prehistoric Planet 3D takes audiences to an extraordinary prehistoric world, revealing the story behind the lives of dinosaurs and the challenges they faced in a constant battle of survival, all told with the most ambitious of CGI visuals.   Tiny Giants 3D tells the story of the day in the life of two little heroes, a chipmunk in the hidden kingdoms of the Enchanted Forest and a scorpion mouse in the unforgiving desert of the Wild West.  Using the incredibly immersive power of specialist 3D cameras, it is a story of drama, danger and courage, of insight and revelation, a journey to discover and understand a new and fascinating natural history.

Walking with Dinosaurs: Prehistoric Planet 3D will screen at the Scotia Bank IMAX Theater at 9:55am on Saturday, September 20th and Tiny Giants 3D will screen immediately afterward at 10:40am.

Joe Kleimanhttp://wwww.themedreality.com
Raised in San Diego on theme parks, zoos, and IMAX films, InPark's Senior Correspondent Joe Kleiman would expand his childhood loves into two decades as a projectionist and theater director within the giant screen industry. In addition to his work in commercial and museum operations, Joe has volunteered his time to animal husbandry at leading facilities in California and Texas and has played a leading management role for a number of performing arts companies. Joe previously served as News Editor and has remained a contributing author to InPark Magazine since 2011. HIs writing has also appeared in Sound & Communications, LF Examiner, Jim Hill Media, The Planetarian, Behind the Thrills, and MiceChat His blog, ThemedReality.com takes an unconventional look at the attractions industry. Follow on twitter @ThemesRenewed Joe lives in Sacramento, California with his wife, dog, and a ghost.
Share
Facebook
Twitter
Linkedin
Email
Print
WhatsApp
Pinterest
ReddIt
Tumblr
Previous article2014 Jackson Hole Science Media Awards Finalist & Winners Announced
Next articleHappy Halloween Weekends Return to Holiday World