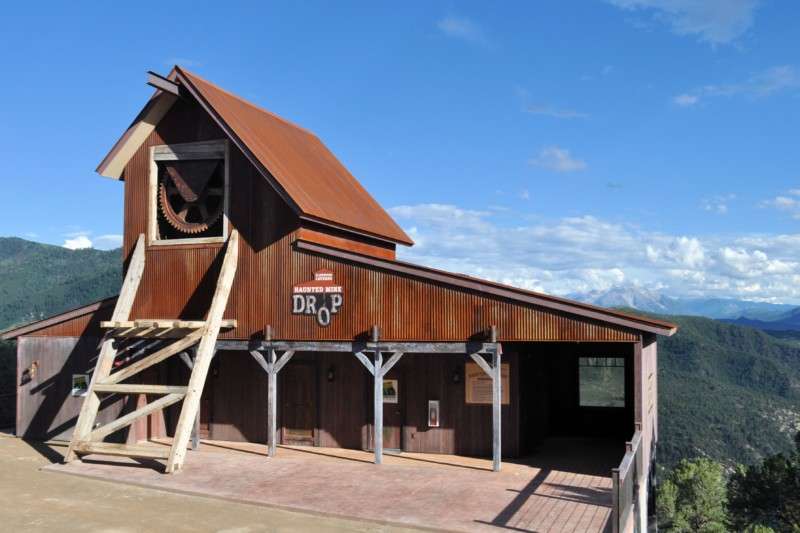 Thrill seekers and fans of dark rides and the paranormal lined up to try the Haunted Mine Drop at Glenwood Caverns Adventure Park, the world’s first drop ride to go underground. Perched on top of Iron Mountain in Glenwood Springs, Colo., the new attraction drops riders 110 feet down inside the mountain as they listen to ghostly mining tales from days gone by.

“We’ve been waiting a long time for this day. Construction of the Haunted Mine Drop started in the spring of 2016, and the planning began a couple of years before that,” said Steve Beckley, who owns Glenwood Caverns Adventure Park with his wife Jeanne. “The reactions from our first riders have made it all worth the wait.”

The ride experience begins in the queue as guests learn they’ve arrived for their first day on the job at the Glenwood Mining Corporation, which has just reopened after a grisly mining accident more than a century ago. Theming inside and out by St. Louis-based Creative Visions creates an old mine atmosphere, with a wood and rusted tin exterior and moving gear visible in the upper section of the building.

Once inside the building, the storyline continues with mining relics, vintage signage and video effects until the new employees enter the drop room where they’ll be lowered into the mine. A Pepper’s ghost, an illusion technique invented by Professor John Henry Pepper and English engineer Henry Dircks in the 1800s, appears to tell the real story behind the mine’s closing so many years ago.

Beckley explains, “Not only is the building themed like an old mine, the ride drops down a shaft excavated out of solid rock the same way that a real mine shaft would be. The temperature drops, and the earthy smell of the rock adds authenticity to the experience.”

Anticipation has been building for months. Earlier this year, it was named one of the 12 most anticipated theme park rides of 2017 by USA Today.

The Haunted Mine Drop ride was constructed by Stan Checketts’ Soaring Eagle in Logan, Utah. Checketts is an icon in the industry, having created some of the top thrill rides in the world, including the park’s cliffside Giant Canyon Swing and the Stratosphere Tower Big Shot in Las Vegas.

In addition to the world’s first underground drop ride, Glenwood Caverns Adventure Park claims several more superlatives related to its attractions, including America’s only mountain-top theme park. The park introduced the first alpine coaster to the U.S. in 2005. The Giant Canyon Swing is the highest of its kind, launching riders out 1,300 feet over the Colorado River. The Cliffhanger Roller Coaster, situated on the edge of Glenwood Canyon at an elevation of 7,160 feet, is the highest-elevation, full-sized roller coaster in America.

“We have a limited amount of space because of our location. To compete with larger parks, we take common thrill rides and use our setting to make them unique. That’s why the Haunted Mine Drop is garnering interest around the globe. There is a lot of appeal in experiencing a one-of-a-kind ride,” Beckley adds.

Glenwood Caverns Adventure Park is open daily through October 29, then on the weekends with extended hours over the holidays. The Haunted Mine Drop will operate year-round. More information is available at http://www.GlenwoodCaverns.com.

Joe Kleimanhttp://wwww.themedreality.com
Raised in San Diego on theme parks, zoos, and IMAX films, InPark's Senior Correspondent Joe Kleiman would expand his childhood loves into two decades as a projectionist and theater director within the giant screen industry. In addition to his work in commercial and museum operations, Joe has volunteered his time to animal husbandry at leading facilities in California and Texas and has played a leading management role for a number of performing arts companies. Joe previously served as News Editor and has remained a contributing author to InPark Magazine since 2011. HIs writing has also appeared in Sound & Communications, LF Examiner, Jim Hill Media, The Planetarian, Behind the Thrills, and MiceChat His blog, ThemedReality.com takes an unconventional look at the attractions industry. Follow on twitter @ThemesRenewed Joe lives in Sacramento, California with his wife, dog, and a ghost.
Share
Facebook
Twitter
Linkedin
Email
Print
WhatsApp
Pinterest
ReddIt
Tumblr
Previous article
Christie 4K Projection Takes Guests on Cinematic Journey With Marines at National Museum of the Marine Corps
Next article
USA Pavilion Hosts 400,000 Visitors in First Half of Expo Astana 2017