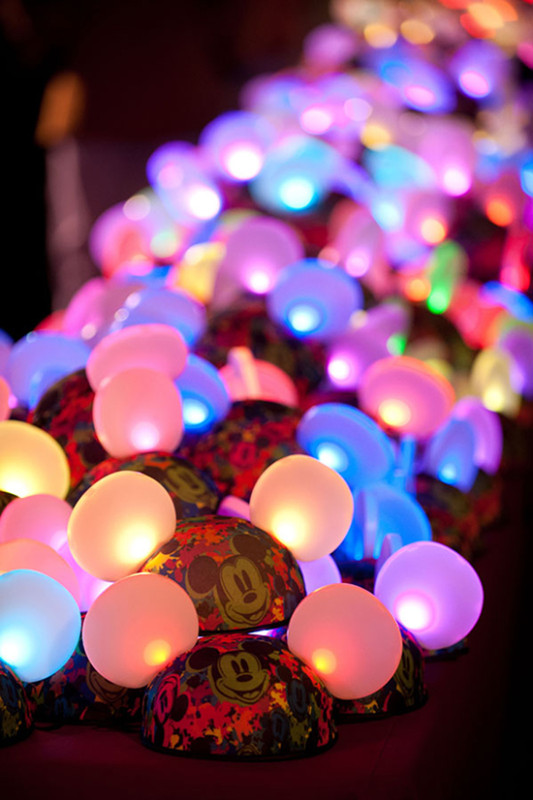 Lake Buena Vista, FL, USA — Guests of the Walt Disney World Resort will light the night thanks to new Glow with the Show Ear hats that will  change colors in sync with fireworks, shows and each other at Magic Kingdom and Disney’s Hollywood Studios.

These interactive versions of the famous Mickey Ear hats will debut on Oct. 15 during the 15th anniversary of Fantasmic!, the nighttime spectacular at Disney’s Hollywood Studios.

These Ear hats glow in myriad colors, commanded with the latest technology to complement the imagery and beat of the fireworks and spectaculars. When not activated by these experiences, more surprises are in store for participants as the ears glow with other ears and settings around the Vacation Kingdom.

“Technology allows the Ear hats to dance and play along with each musical and illuminated sequence.  They truly bring the show’s environment out of the lagoon and the sky, and into the audience in an amazing and dazzling new way, making our guests truly Glow With the Show,” said Dara Trujillo, manager of merchandise marketing, communication, synergy and integration, Walt Disney World Resort.

Beginning Oct. 19, guests will be able to experience the Wishes fireworks extravaganza at Magic Kingdom with the new Glow with the Show Ear hats. And during the holiday season guests can don their hats and “glow” with Spectacle of Dancing Lights at Disney’s Hollywood Studios, and at Holiday Wishes: Celebrate the Spirit of the Season fireworks display and Celebrate the Magic, the nighttime projection show at Cinderella Castle at Magic Kingdom.

Each set of Glow with the Show Ear hats is available for $25 at select locations throughout the Magic Kingdom and Disney’s Hollywood Studios.

For more than 55 years, the classic, black Mickey Mouse Ear hat has been a Disney Parks favorite and signature souvenir item. Across the decades, there have been more than 200 different ear hats including limited and novelty editions. The new Glow with the Show Ear hats made their debut at Disney California Adventure in 2012 at World of Color.  The ears are also in use at Disneyland Paris.

Joe Kleimanhttp://wwww.themedreality.com
Raised in San Diego on theme parks, zoos, and IMAX films, InPark's Senior Correspondent Joe Kleiman would expand his childhood loves into two decades as a projectionist and theater director within the giant screen industry. In addition to his work in commercial and museum operations, Joe has volunteered his time to animal husbandry at leading facilities in California and Texas and has played a leading management role for a number of performing arts companies. Joe previously served as News Editor and has remained a contributing author to InPark Magazine since 2011. HIs writing has also appeared in Sound & Communications, LF Examiner, Jim Hill Media, The Planetarian, Behind the Thrills, and MiceChat His blog, ThemedReality.com takes an unconventional look at the attractions industry. Follow on twitter @ThemesRenewed Joe lives in Sacramento, California with his wife, dog, and a ghost.
Share
Facebook
Twitter
Linkedin
Email
Print
WhatsApp
Pinterest
ReddIt
Tumblr
Previous article
Carowinds Adding Two New Thrill Slides to Boomerang Bay for 2014 Season
Next article
Chicago Lightscape Lighting and Sound experience enhanced by DesignLab Chicago