Goddard Group Forging Ahead on Four Blockbuster Projects in China 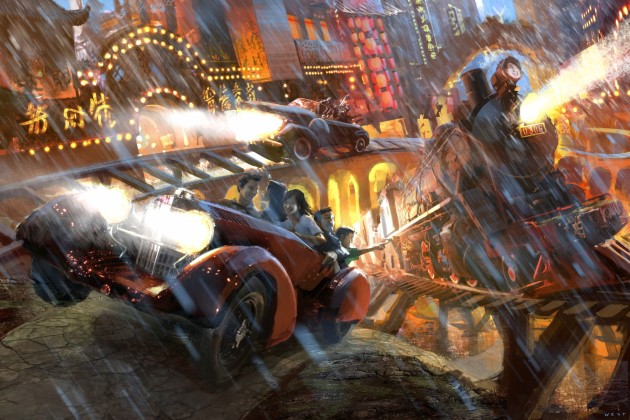 Hollywood, CA, USA (January 27, 2015) – The Goddard Group, a world leader in the design, master planning, development and production of major themed-entertainment attractions, resorts and destinations worldwide, has announced a number of new large-scale projects for a variety of clients located across China. In fact, the renowned company is currently responsible for more theme parks and resorts which are now open, or under construction, in China than any other themed design company in the world. Mr. Gary Goddard, CEO/Founder, of the Goddard Group, made the announcements.

The Goddard Group’s current projects in China include: 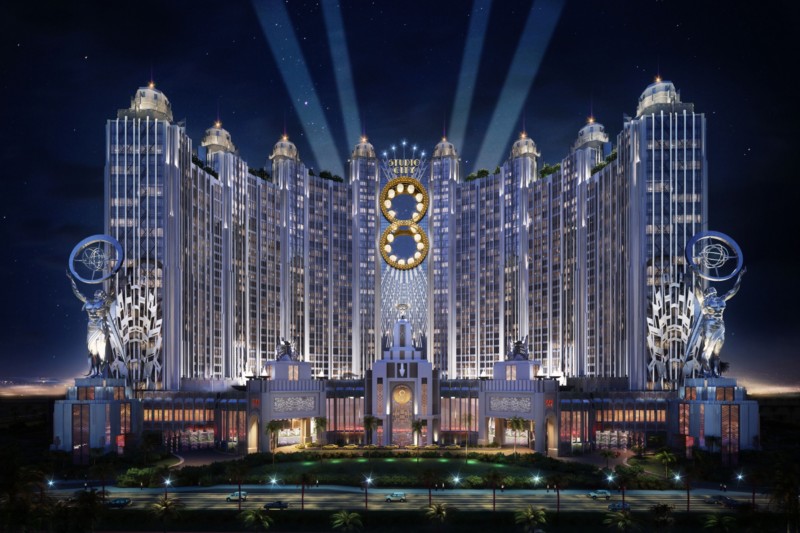 “Because we share a unified vision when it comes to Hollywood and the world of motion pictures, our collaboration with Lawrence Ho, Co-Chairman and CEO of Melco Crown Entertainment, was highly productive, resulting in one of the most exciting, dynamic and architecturally stunning integrated resorts ever created, not only in Macau, but in the world,” said Mr. Goddard.

When it opens in mid-2015, Melco Crown’s Studio City will offer visitors a ‘next generation’ of outstanding leisure destination experiences designed to enhance and establish the territory as a truly international tourism center. Ideally located on the Cotai Strip, close to the LotusBridge immigration point (which connects Hengqin Island with a future station for the Macau Light Rapid Transit – LTR,) Studio City will deliver more world-class entertainment amenities than any other integrated resort in Macau. 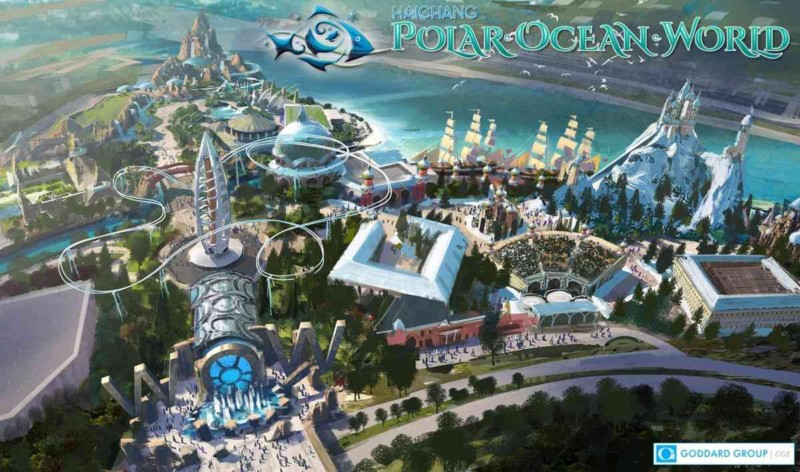 The Goddard Group is currently designing, for client Haichang Holdings Group, the new themed-entertainment destination: “Polar Ocean World.”  The project, a marine-themed cultural park, is being heralded as an important part of Shanghai, China’s tourism plan. Haichang Holdings has secured land use rights for Polar Ocean World, which will be developed on a nearly 300,000 meter site next to Dishui Lake.

Mr. Goddard said, “We are excited and honored to be part of the ground-breaking new Polar Ocean World in Shanghai. The goal here was to create an attraction that would offer a uniquely different experience than the nearby Disney park, and one that would provide a complimentary, yet equally compelling, destination for families the world over.”

Polar Ocean World, scheduled to open in 2017, will become Haichang’s seventh, polar-themed destination in China. The project will consist of a marine theme park with 13 exhibition halls, four, large, animal-interaction plazas, four cinemas, 18 rides, space for animal-related exhibitions and parades, and a hotel. These attractions will combine elements of entertainment, ecology, and scientific research.

Goddard Group Director of Design Taylor Jeffs, explains, “We have been busy creating attractions that are original and without precedent inChina, by merging rides, theaters and aquatic arenas in ways that will make emotional connections with our audiences.  We want our visitors to be entertained and wowed, excited and surprised, while touching their hearts, too.  We are looking forward to connecting families with nature and the ocean in ways that will ensure lifetime memories.”

“As a world-class, flagship park, Polar Ocean World will showcase a wide range of species from the sea. It will also host significant entertainment features, such as large, marine science-based facilities and an Omnimax movie theater. We are determined to ensure that theShanghai project will be on par with the industry’s global, first-tier standards in the areas of animal science exhibition, education, themed-entertainment and high technology,” stated Wang Xuguang, CEO of Haichang Holdings. 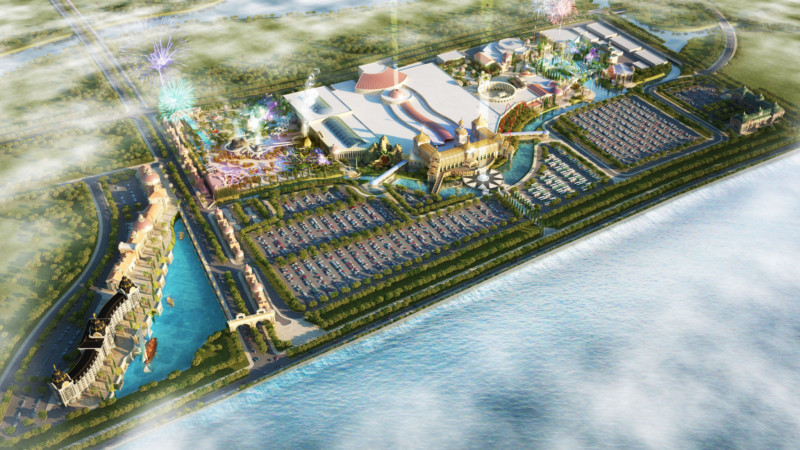 “KINGDOM OF POSEIDON” IN HARBIN, CHINA:

The Goddard Group has completed design, and construction has begun, on a new, themed-entertainment attraction, “Kingdom of Poseidon,” based in Harbin, China, a city famous for its annual winter Ice Festival, where hundreds of carved blocks of ice form an illuminated “IceKingdom” and draw millions of people. Kingdom of Poseidon will feature a wide array of rides, shows, and unique experiences based upon stories of Poseidon (the sea god in Greek mythology,) and other famous, ocean-related adventure tales. Goddard Group’s client is Malaysia-based KWZone Group, which has invested $1.6 billion U.S. dollars into the project.

Mr. Jeffs said, “The Kingdom of Poseidon will take visitors into compelling stories in a variety of ways, immersing them in an assortment of ocean-themed adventures. Using a wide range of ‘real world’ 4D effects, and, in many cases, making use of the latest in video mapping, 3D, and other projection technologies, guests will experience an unprecedented array of undersea, oversea, and by-the-sea attractions.”

Mr. Goddard adds, “We are creating something entirely different with Kingdom of Poseidon. Our goal is to provide new ways by which to involve park guests in the mysteries, adventures, myths, sagas, and legends about the seas – stories which have been with us since mankind’s earliest days of civilization. Man’s connection with the world’s oceans will be communicated here through a series of exciting and heart-felt emotional attractions.”

Song Xibin, Mayor of Harbin, said at the park’s recent inauguration ceremony that the project would help boost the city’s cultural tourism industry, while also improving the city of Harbin’s competitiveness. 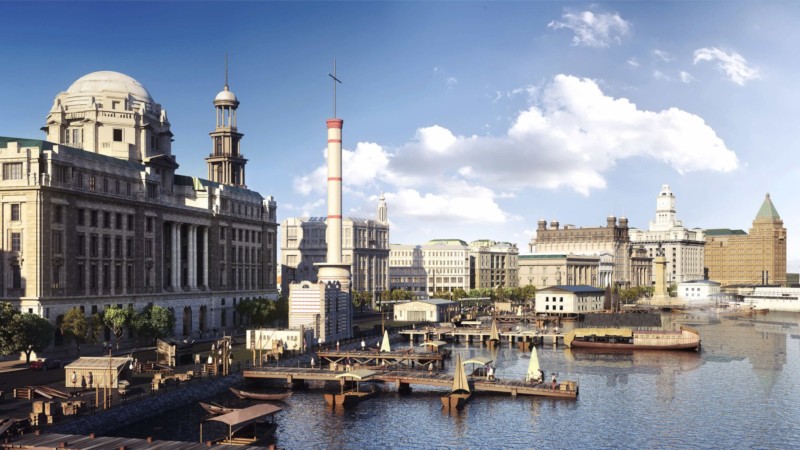 The Goddard Group was retained to design the massive “Shanghai Bund” movie studio and theme park resort (set to open in 2016,) located in Hengdian, China, a few hours from Shanghai. Mr. Goddard said, “As a film director myself, we were thrilled with this project on several levels.  First, to re-create The Bund in its pre-war condition was a designer’s dream assignment.  We are literally recreating a major international city in its pre-war state, making it a suitable shooting location for a host of motion picture productions. In addition, we also melded many other areas of old Shanghai into this attraction, as part of an overall Shanghai studio backlot.”

He adds, “We were able to work with the Hengdian Studios team to design a backlot that would greatly facilitate shooting within multiple areas, simultaneously. Beyond that, and based upon our many years of designing major attractions for Universal Studios in Los Angeles and Florida, we were able to blend-in a ‘working studio tour’ with themed attractions hidden within several sound stages. In this manner, the site will be able to function simultaneously  both as a working movie studio and a tourist attraction.”

Said Mr. Jeffs, “The new studio and movie park will be home to several large-scale themed rides, shows, and studio tours, designed to transport guests back to The Bund’s golden era. These attractions are based upon classic Chinese motion picture genres and styles, and are sure to make this park’s entertainment offerings truly unique.”

Joe Kleimanhttp://wwww.themedreality.com
Raised in San Diego on theme parks, zoos, and IMAX films, InPark's Senior Correspondent Joe Kleiman would expand his childhood loves into two decades as a projectionist and theater director within the giant screen industry. In addition to his work in commercial and museum operations, Joe has volunteered his time to animal husbandry at leading facilities in California and Texas and has played a leading management role for a number of performing arts companies. Joe previously served as News Editor and has remained a contributing author to InPark Magazine since 2011. HIs writing has also appeared in Sound & Communications, LF Examiner, Jim Hill Media, The Planetarian, Behind the Thrills, and MiceChat His blog, ThemedReality.com takes an unconventional look at the attractions industry. Follow on twitter @ThemesRenewed Joe lives in Sacramento, California with his wife, dog, and a ghost.
Share
Facebook
Twitter
Linkedin
Email
Print
WhatsApp
Pinterest
ReddIt
Tumblr
Previous articleIAAPA Leadership Conference 2015 to Highlight Attractions of Dubai and Abu Dhabi
Next articleGateway Ticketing Promotes Marcus Lopez to Newly Created Position of Director of Customer Experience