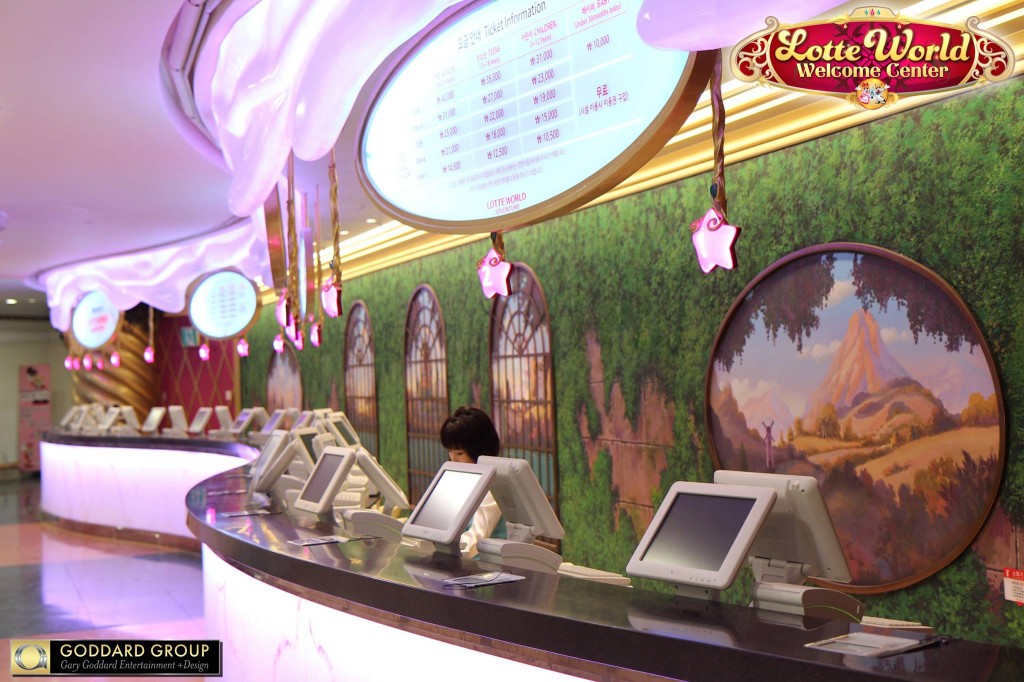 Singapore — South Korea’s Lotte World has announced plans to introduce the world’s first upscale ticketing experience at a major theme park. The announcement was made during the IAAPA Asian Attraction Expo in Singapore.

Designed by the Goddard Group, a Hollywood-based design firm, the 3,500 square meter Lotte World Welcome Center will replace the park’s existing entry experience — one that has remained virtually untouched since opening in 1989. When the multi-phased Welcome Center project, currently under construction, is ultimately completed in October of this year, guests will find that the traditional ticket booths have been eliminated. In their place will be long flowing ticketing desks — an experience which the designers claim will be much more akin to that of checking into a luxury hotel.

“With each new project we take on, our goal is to challenge tradition and advance the medium.” says Taylor Jeffs, the Goddard Group’s Director of Design. “Here, we realized early-on that the idea of having an inherently-unwelcoming plexiglass barrier between guests and their hosts was antiquated,” he adds, citing the trend toward cashless payments in markets like the US and Korea.  “I think it’s safe to say that what we’ve created for Lotte World’s new Welcome Center represents the future of the theme park arrival experience.”

The development of this project comes on the heels of a decade-long shift towards non-traditional upscale experiences all around the world taking place in luxury cinemas, drug stores, and even bowling alleys. According to the Goddard Group, the luxury ticketing concept was first conceived in 2008 during the development of the Six Flags Dubailand project. Since plans for the park were abandoned following that region’s economic difficulties, Goddard’s team has been searching for a partner willing to take the bold step of bringing this idea to reality, and is thankful to have found that partner with their client Lotte World.

According to Lotte World executive Ashley Choi, the project’s internal producer for the park, the new Welcome Center will be operationally superior, as well. “As part of the re-development, we’re literally doubling the number of ticketing stations available for our guests, in addition to increasing our turnstile capacity by over thirty percent,” she stated, noting that the park has experienced steadily-increasing visitorship over the last two years.

As for the design of the space itself, Jeffs says the ambiance will be that of a dream-like garden. “By its nature, a theme park’s entrance is generally chaotic, so our primary goal is to organize the chaos as best we can, and to put guests in a calming and stimulating multi-sensory environment.” He adds that the Goddard Group will employ visceral elements including smells, sounds, and transforming mood-lighting to achieve this effect.

Jeffs hopes other parks around the world will be inspired by the trend towards upscale arrival experiences. He notes, “When you spend tens of millions on an

E-Ticket attraction, only a fraction of a theme park’s daily visitors will actually experience it. Yet, a park’s entrance is something that literally every single guest experiences, and also represents the first and last impression that is made. So why has this critical element long remained an after-thought? Our goal here is to change that.”

Joe Kleimanhttp://wwww.themedreality.com
Raised in San Diego on theme parks, zoos, and IMAX films, Joe Kleiman would expand his childhood loves into two decades as a projectionist and theater director within the giant screen industry. In addition to his work in commercial and museum operations, Joe has volunteered his time to animal husbandry at leading facilities in California and Texas and has played a leading management role for a number of performing arts companies. Joe has been News Editor and contributing author to InPark Magazine since 2011. HIs writing has also appeared in Sound & Communications, LF Examiner, Jim Hill Media, and MiceChat. His blog, ThemedReality.com takes an unconventional look at the attractions industry. Follow on twitter @ThemesRenewed Joe lives in Sacramento, California with his fiancé, two dogs, and a ghost.
Share
Facebook
Twitter
Linkedin
Email
Print
WhatsApp
Pinterest
ReddIt
Tumblr
Previous article2013 SEGD Global Design Awardees Announced
Next articleJune 19 TEA workshop in Burbank to Cover Business Development Mentoring for the Attractions Industry