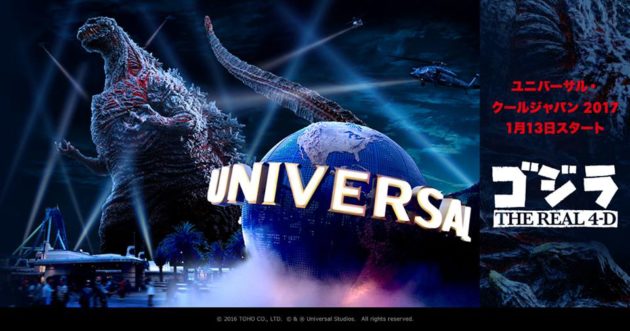 Osaka, Japan — Universal Studios Japan® will be holding Universal Cool Japan 2017, the next in a series of yearly events that has been massively popular both in Japan and with visitors from overseas.

Held at Universal Studios Japan® since 2015, Universal Cool Japan is an event that brings together cool, internationally-loved entertainment brands from Japan, and delivers the charms of Japan both within the country and globally.  Universal Cool Japan delivers real-life reproductions of the worlds of top entertainment brands from a wide range of genres, including movies, manga, anime, games, music, and fashion, treating each and every guest to an immersive and exciting experience.

In its first announcement for 2017, the park has revealed that Godzilla will be joining the line-up for the first time, fresh after claiming the top of the weekend box-office record ( from 30th to 31st of July announced by Kogyo-Tsushinsha) with the recent release of Godzilla Resurgence! Godzilla features in a total of 31 films both in Japan and overseas, holds a Guinness World Record*, and is the only Japanese-made content to feature on the Hollywood Walk of Fame. Popular across the world and across generations alike, this essential part of Japan’s coolness will now feature in Godzilla: The Real 4-D. Guests will be transported to a battle with an incredibly realistic Godzilla, and discover a thrilling experience unlike any before.

Godzilla: The Real 4-D is a 4-D attraction in which guests personally confront an almighty Godzilla rampaging through the city. Guests will be amazed by the unimaginable power and presence of Godzilla that have made him so popular, and they’ll be absolutely thrilled by the awesome battle that takes place! In this original story exclusive to Universal Studios Japan®, guests will discover an exciting experience unlike any before.

Joe Kleimanhttp://wwww.themedreality.com
Raised in San Diego on theme parks, zoos, and IMAX films, Joe Kleiman would expand his childhood loves into two decades as a projectionist and theater director within the giant screen industry. In addition to his work in commercial and museum operations, Joe has volunteered his time to animal husbandry at leading facilities in California and Texas and has played a leading management role for a number of performing arts companies. Joe has been News Editor and contributing author to InPark Magazine since 2011. HIs writing has also appeared in Sound & Communications, LF Examiner, Jim Hill Media, and MiceChat. His blog, ThemedReality.com takes an unconventional look at the attractions industry. Follow on twitter @ThemesRenewed Joe lives in Sacramento, California with his fiancé, two dogs, and a ghost.
Share
Facebook
Twitter
Linkedin
Email
Print
WhatsApp
Pinterest
ReddIt
Tumblr
Previous articleJapan at Astana 2017: A model for world’s fair participation
Next articleHersheypark to Open First S&S Triple Tower Attraction in USA