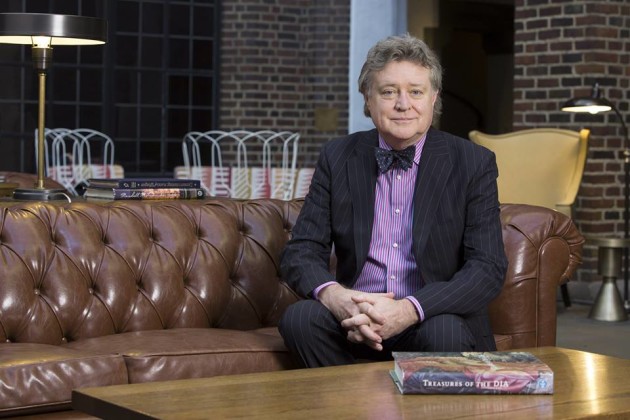 Washington, DC, USA — The American Alliance of Museums (AAM) announces that Director, President and CEO Graham W.J. Beal and the Detroit Institute of Arts (DIA) Board of Directors are the first recipients of AAM’s Chair’s Leadership Award. The award is not presented annually; rather, it is reserved for rare occasion of outstanding leadership and extraordinary accomplishments in the museum field.

Kaywin Feldman, chair of the AAM Board of Directors, presented the honor to Beal and the DIA Board during the Association of Art Museum Directors (AAMD) Annual Meeting in Detroit last week.

The Chair’s Leadership Award acknowledges Beal’s 16 years of service as director of the DIA. Retiring this month, Beal’s legacy includes the landmark $185-million renovation and reinstallation of the collection that transformed the museum – boosting attendance and support above and beyond any other point in its 130-year history. Beal and the DIA leadership team completed the capital project while steering the museum through a series of crises, from the financial crash of 2008 to Detroit’s bankruptcy in 2013.

“The award to the DIA is in recognition of the museum’s exceptional work in engaging its public through expansion, experimental installation and resilience during a time of controversy,” said Feldman. “In the wake of the city’s recent financial crisis, Graham and his staff and board worked tirelessly to ensure the long-term sustainability of the DIA, a remarkable community asset. They are truly an inspiration to the entire museum community.”

“The Board of Directors and I thank AAM for this award from our museum colleagues,” said Beal. “During my tenure at the DIA, our board and staff worked tirelessly during unprecedented challenges to ensure the DIA will continue our mission of helping each visitor find personal meaning in art for generations to come.”

Beal has been the director, president and CEO of the Detroit Institute of Arts since 1999. Since joining the DIA’s leadership, Beal has overseen two major capital campaigns, guided the reinstallation of the museum’s world-renowned collection and overseen the museum’s renovation and expansion.

Beal has continued to build on the museum’s reputation and has strengthened relationships with some of the world’s most well-regarded institutions through loans and programming supported by the museum’s collection. Under Beal’s leadership the DIA has co-organized exhibitions such as Van Gogh: Face to Face in 2000 and Magnificenza! The Medici, Michelangelo and the Art of Late Renaissance Florence in 2003. Also in 2003, Beal curated the popular exhibition On the Edge: Contemporary Art from the DaimlerChrysler Collection.

Prior to his tenure at the DIA, Beal served as director of the Los Angeles County Museum of Art from 1996 to 1999. He held the position of director of the Joslyn Art Museum in Omaha, Nebraska from 1989 to 1996 and served as chief curator at the San Francisco Museum of Modern Art from 1984 to 1989. Beal has published many exhibition catalogs, books, and articles including an exhibition catalogue on the DIA’s American paintings.

FROM THE DETROIT FREE PRESS

“Beal’s retirement comes after an extraordinarily stressful 18 months…The museum’s leadership team fiercely defended itself against creditors pushing for a sale of art. Beal also battled Detroit emergency manager Kevyn Orr before the pensions-and-art rescue plan known as the grand bargain emerged and turned them from adversaries into allies – while also granting the DIA its long-sought independence from city ownership.”

Joe Kleimanhttp://wwww.themedreality.com
Raised in San Diego on theme parks, zoos, and IMAX films, InPark's Senior Correspondent Joe Kleiman would expand his childhood loves into two decades as a projectionist and theater director within the giant screen industry. In addition to his work in commercial and museum operations, Joe has volunteered his time to animal husbandry at leading facilities in California and Texas and has played a leading management role for a number of performing arts companies. Joe previously served as News Editor and has remained a contributing author to InPark Magazine since 2011. HIs writing has also appeared in Sound & Communications, LF Examiner, Jim Hill Media, The Planetarian, Behind the Thrills, and MiceChat His blog, ThemedReality.com takes an unconventional look at the attractions industry. Follow on twitter @ThemesRenewed Joe lives in Sacramento, California with his wife, dog, and a ghost.
Share
Facebook
Twitter
Linkedin
Email
Print
WhatsApp
Pinterest
ReddIt
Tumblr
Previous article2015 Asian Attractions Expo in Hong Kong Set to Break Records
Next articleNational Days at world expos: How much ice cream for 800 people?