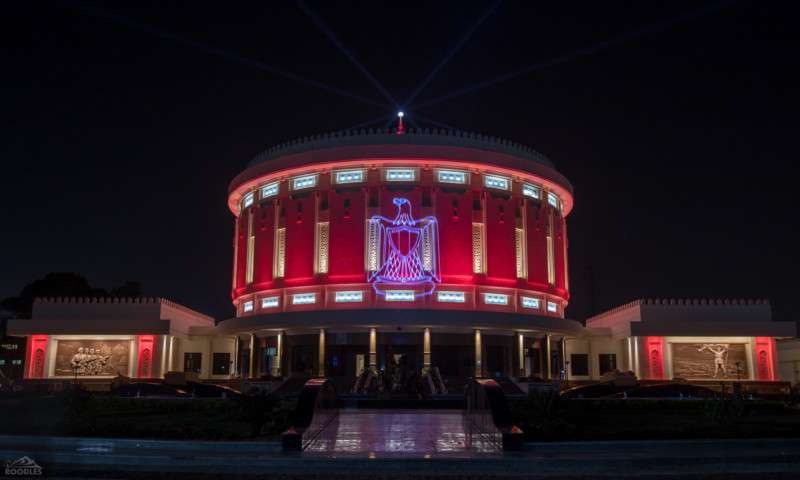 Green Hippo, specialist creator of tools for the real-time manipulation of video for the AV industries, has announced that its Hippotizer Media Servers are driving a range of custom high-resolution displays at the newly renovated Panorama 6th October Museum in Cairo, which commemorates the 6th October War of 1973.

Using Hippotizer’s advanced mapping capabilities and flexible third-party integration options, local AV specialist Audio Technology S.A.E was able to meet the many challenge of this complex installation, which includes custom HD projection mapping solutions in three interior halls, as well as on the outside of the building itself. The museum is now able to pursue its educational remit with a full-day entertainment program which brings the history of this troubled period back to vivid life for audiences of all ages.

“Mounting, blending and aligning the projectors in the very small spaces to cover the large screen surfaces, especially for the 3D mapping projection show in the outdoor zone and in Hall 3, was a big challenge,” says Jacko Makram, project design leader for Audio Technology Co, S.A.E. “Also, deploying and managing the content in high resolutions of 4K or 10K, blending these projections and then ensuring consistent system stability during the daily shows.”

With the blending and wrapping capabilities of the Hippotizer Media Servers, these challenges were relatively simple to deal with. “We easily managed the content to fit our custom screens and split the required content for each projector,” says Michael Emad, project installation leader. “Also, the Hippotizers’ ability to be controlled via third party systems, such as Crestron or Medialon Show Controller, and to synchronize with other system elements, allows for easy operation by the show operator.”
Throughout the nine-month period of installation, commissioning and staff training, Audio Technology Co, S.A.E were aided by Green Hippo’s technical support, from training for the design and installation teams to ongoing backup during the project phases.

The result has been appreciated by all concerned. “The client has said that the completed installation exceeds all their expectations,” says Makram, “and the audiences to date have been so excited, as this is the first time in Egypt that we have had all of this technology and experience combined together in one place.”

Joe Kleimanhttp://wwww.themedreality.com
Raised in San Diego on theme parks, zoos, and IMAX films, InPark's Senior Correspondent Joe Kleiman would expand his childhood loves into two decades as a projectionist and theater director within the giant screen industry. In addition to his work in commercial and museum operations, Joe has volunteered his time to animal husbandry at leading facilities in California and Texas and has played a leading management role for a number of performing arts companies. Joe previously served as News Editor and has remained a contributing author to InPark Magazine since 2011. HIs writing has also appeared in Sound & Communications, LF Examiner, Jim Hill Media, The Planetarian, Behind the Thrills, and MiceChat His blog, ThemedReality.com takes an unconventional look at the attractions industry. Follow on twitter @ThemesRenewed Joe lives in Sacramento, California with his wife, dog, and a ghost.
Share
Facebook
Twitter
Linkedin
Email
Print
WhatsApp
Pinterest
ReddIt
Tumblr
Previous articleThe Hettema Group announces management changes
Next articleCLYMB Abu Dhabi sets November 29 opening date on Yas Island