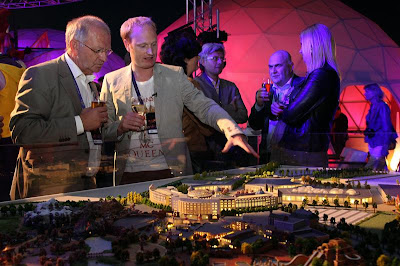 Warsaw, Poland — Adventure World Warsaw (AWW) marked a milestone on Saturday evening, July 21 on the grounds of the Grodzisk Mazowiecki celebrating the official groundbreaking of the 230-hectare resort complex. “Today marks a very special day for not only me, but for the people of Poland and all of Central Eastern Europe”, expressed Peter Mulder, CEO of AWW. “I have been dreaming and planning for this night for many years and I’m excited to be part of Poland’s future as we create a new family entertainment destination”, said Mulder.

The evening event began with an anxious crowd as they peaked beyond the 8-meter purple doors that opened to the groundbreaking event. Guests received an authentic “Guide to the Groundbreaking” that provided a storybook-like map outlining all the exciting moments that were about to take place throughout the night. 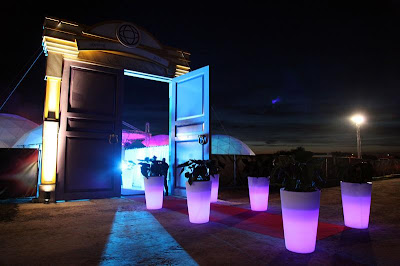 Sylwia Mulder, Adventure World Warsaw’s Entertainment Manager, coordinated the the process of designing and executing the event together with the Netherlands-based Jora Entertainment. Together they transformed the former cornfield into a state-of-the-art structure including globe-size tent spaces with creative décor and entertainment that reflected the 5 lands that will be featured in the theme park. Themed culinary delights included oversized donuts and candy canes dripping from the ceiling in the Creature Lagoon area, to a chef preparing the newest culinary cuisine at the molecular buffet in the Lost Kingdom. Upon entering the Land of Legends, a drum core escorted guests to a sushi bar and in Old Poland guests enjoyed some of Poland’s finest homeland cuisine. “We wanted to provide an experience that would fully immerse our guests into the theme park world and expose them to what will one day be here in Warsaw for millions to enjoy”, stated Marjolein van de Stolpe, CEO, Jora Entertainment.

The night capped off with a 15-minute fireworks display following speeches from top entertainment industry executives and Polish local and state officials. “What a wonderful evening and momentous occasion for all of us to celebrate” noted Mayor Grzegorz Benedykciński. “We have been working closely with Mr. Mulder and his team for many years to make this happen – and tonight it becomes real” said the Mayor.

Other dignitaries who also spoke about the project and the positive impact it will have on the community, greater Poland and surrounding countries included Klaus Betz, CEO Imtech, the recently announced General Contractor for Adventure World Warsaw Parks & Resort, and Roland Mack, IAPPA Chairman of the Board, President of Europa Park and founder of Mack Rides.”

Adventure World Warsaw would like to thank all the following vendors for their contributions for making the Groundbreaking Ceremony such a great success:

Joe Kleimanhttp://wwww.themedreality.com
Raised in San Diego on theme parks, zoos, and IMAX films, Joe Kleiman would expand his childhood loves into two decades as a projectionist and theater director within the giant screen industry. In addition to his work in commercial and museum operations, Joe has volunteered his time to animal husbandry at leading facilities in California and Texas and has played a leading management role for a number of performing arts companies. Joe has been News Editor and contributing author to InPark Magazine since 2011. HIs writing has also appeared in Sound & Communications, LF Examiner, Jim Hill Media, and MiceChat. His blog, ThemedReality.com takes an unconventional look at the attractions industry. Follow on twitter @ThemesRenewed Joe lives in Sacramento, California with his fiancé, two dogs, and a ghost.
Share
Facebook
Twitter
Linkedin
Email
Print
WhatsApp
Pinterest
ReddIt
Tumblr
Previous articleAdventure World Warsaw Groundbreaking Ceremony set for July 21, 2012
Next articleLeisure Quest International Establishes Chinese Headquarters in Tianjin