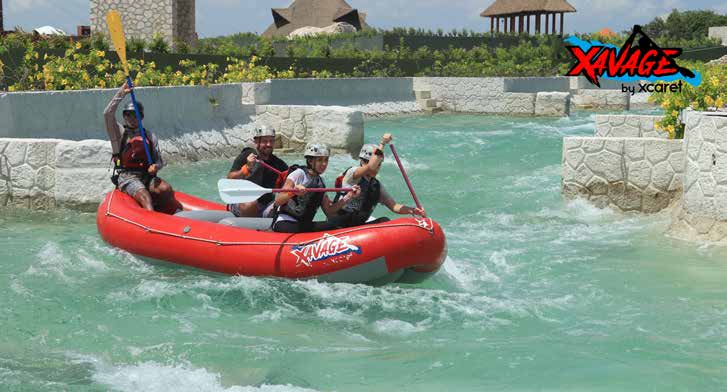 Mexico’s eastern Yucatan peninsula is a landscape of variety. Thick jungles yield to picture-perfect beaches looking out into the Gulf of Mexico. Beneath the landscape, underground rivers connect cenotes (giant sinkholes) to one another, creating caverns of crystal-clear water, surrounded by vine-encrusted rock walls. To the north, the party-centric resort town of Cancun attracts the all-inclusive crowd. Ninety miles south, Playa del Carmen offers a more urban tourist town, with the ancient ruins of Tulum nearby. Further inland, the Mayan pyramid at Chichén Itzá and other ancient sites draw visitors by the busload.

For nearly 30 years it has been this combination of natural beauty and Mexican heritage that has served as the inspiration for Grupo Xcaret’s parks and resorts. In 1990 a partnership of architects and investors opened Xcaret, the company’s first ecotourism park that features underground river swimming, cenote exploration, animal habitats, and a nightly show chronicling hundreds of years of Mexican history [See “Getaway to Xcaret,” InPark issue #52].

Grupo Xcaret’s portfolio now includes several more parks: Xelha, Xenses and Xplor (and Xplor Fuego, a night-time version of the park) [See “Xenses and sensibilities,” InPark issue #72]. Each park has a unique take on the natural landscape and most include some variations of river swimming, cenote exploration, ziplining and water sports. The company also operates several daily tours to sites around the region as well as Xoximilco, a nighttime party/canal cruise modeled after Mexico City’s Xochimilco.

In 2017 the company opened its first hotel, Hotel Xcaret Mexico. The All-Fun Inclusive® resort situated along the waterfront offers 900 suites, acres of activities, and a range of dining experiences from casual to Michelin-star rated. Guests also receive complimentary admission to all of Grupo Xcaret’s parks and tours during their stay.

In 2019, the company debuted Xavage, an extreme thrill park whose activities amp up the adventure level offered to guests.

Geographically, Grupo Xcaret covers a wide area. The core parks (Xcaret, Xenses and Xplor) and hotel are a short 11 kilometers (seven miles) from downtown Playa del Carmen. Xel-ha is located 41km (25 miles) to the south, while Xavage and Xoximilco are 56km (35 miles) to the north. These northern parks are a mere 8km (five miles) from the Cancun airport, by far the region’s largest and most popular entry point for tourists visiting the Yucatan. Regular bus transportation is provided between the locations.

Hotel Xcaret Mexico and Xavage mark a shift in Grupo Xcaret’s strategy for serving the Riviera Maya market. The hotel was a natural extension for the company, offering wholly inclusive vacations similar to what one would find at a Disney or Universal property. While there are ample amounts of luxury and relaxation to be found at the hotel, there is a distinct element of adventure present that separates it from similar properties, and also connects it to their Xavage expansion.

“After opening Hotel Xcaret Mexico in December 2017, we knew that the already remarkable All-Fun Inclusive perks had to grow and evolve to cater to repeat visitors and those searching for outdoor excitement unlike any other,” said Marcos Constandse, Vice President of Finance and Business Administration and Counselor of the Board at Grupo Xcaret.

A central feature of the hotel is a series of interconnected rivers, a sort of intracoastal waterway connected to the ocean. They wind around a group of land masses called “The Islands.” A jogging path on top of the islands wanders through forested sections and leads to various exercise stations. Staircases lead down to a series of tunnels beneath the islands for subterranean adventures. Several waterslides and steps lead from the islands down into the waterways below, where adventurous visitors can swim or kayak. Suspension bridges connect the islands as well as various other buildings and points across the resort. It is truly an explorer’s paradise, with secluded beaches, inlets and caves accessible only by swimming. Similar to all of Xcaret’s parks, automated cameras activated by RFID wristbands capture perfect selfies at various adventurous and scenic spots around the hotel.

It is this sense of adventure that is most directly linked to the new Xavage park. Built on the same site as the company’s Xoximilco park, Xavage takes advantage of many of the facilities that Xoximilco uses at night and turns them into daytime adventures. Xoximilco opened in 2013 as an evening activity appealing to nearby Cancun’s visitors. Guests board a boat and cruise through a series of canals while enjoying food, drink and cultural entertainment. Xoximilco was designed knowing that at some point a daytime experience would also be offered, though exact details had not been set initially.

“The Xavage project began in 2013 with thorough topography studies to determine the best way to use and enhance the land’s attractions while being respectful of its ecosystem, with park construction beginning in 2017. The park offers the only whitewater rapids in Cancun and Riviera Maya, bringing adventure excursions to a whole new level,” said David Quintana, Vice President of Strategy and Development for Grupo Xcaret.

The new park expands significantly on the Xoximilco footprint. The Xoximilco kitchens are used to provide Xavage guests with an all-you-can-eat buffet. The Xoxmilco canals are used for a Xavage high-speed boating experience. Just about everything else is brand new to the park.

Guests choose from a series of activities, ranging in thrill level. Kayaks and a waterslide play structure provide tamer experiences.

On the bolder end of the spectrum, a white-water rafting experience places several guests in an inflatable raft and sends them (along with a guide) down a class three, human-made rapids. Part of the experience includes training and practice for how to handle capsizing.

A tubular zip line allows guests in the prone “Superman” position to fly around a course that starts 65 feet in the air. A monster truck puts guests behind the wheel of an all-terrain vehicle to navigate an obstacle course complete with giant stone steps, crushed cars, and large muddy puddles. Finally, even the most adept high-wire walker will be challenged by four levels of ropes course. The lowest-level course sits 26 feet above the ground, while the highest-level rises to 118 feet.

Although the total number of experiences is limited, each adventure takes a good amount of time to complete and, combined, can easily fill an entire day. Adventurous kids will find plenty to do at the park, but the core demographic seems to be younger adults, perhaps on a honeymoon in Cancun, looking for a day of adventure to complement days of relaxation on the beach.

Xcaret’s move toward a thrill park concept follows a trend in the industry. In destinations such as Las Vegas, operators have in recent years installed adrenaline-pumping attractions like high-speed ziplines, in part to capture the 20- to 30-year-old demographic that places high value on unique experiences. Similarly, observation towers and tall buildings have flourished by adding thrilling experiences such as Edge Walk at Toronto’s CN Tower or the soon-to-open Aon Center in Chicago.

Appealing to adventurers is a path Xcaret has forged for some time, with each of the new parks inching up the thrill factor. In a sense, it’s a natural progression. As Xcaret’s reputation has grown and increased over time, guests are more willing to trust the safety and reliability of the experiences offered to them. Xavage, and to a certain extent Hotel Xcaret Mexico, take thrills to the next level in ways that are certainly game-changing in the Yucatan region, yet they still incorporate the same values and atmosphere upon which the brand is built.

Grupo Xcaret is continuing its growth plans, with new hotels and parks already under construction. An all-inclusive resort in Cancun (La Casa de La Playa) will open next year with another resort closer to Hotel Xcaret Mexico scheduled to open in 2021 (Hotel Xcaret Arte). The company expects to build a total of 10 hotels within the next decade, with additional parks opening roughly every other year, some in completely new destinations. Expected to open in 2020 is Xcaret Xibalbá, named after the Mayan word for “the underworld.” The new park will heavily feature cenotes and underground activities. The park will be located in Vallodalid, about 150km west of Xcaret park. • • •