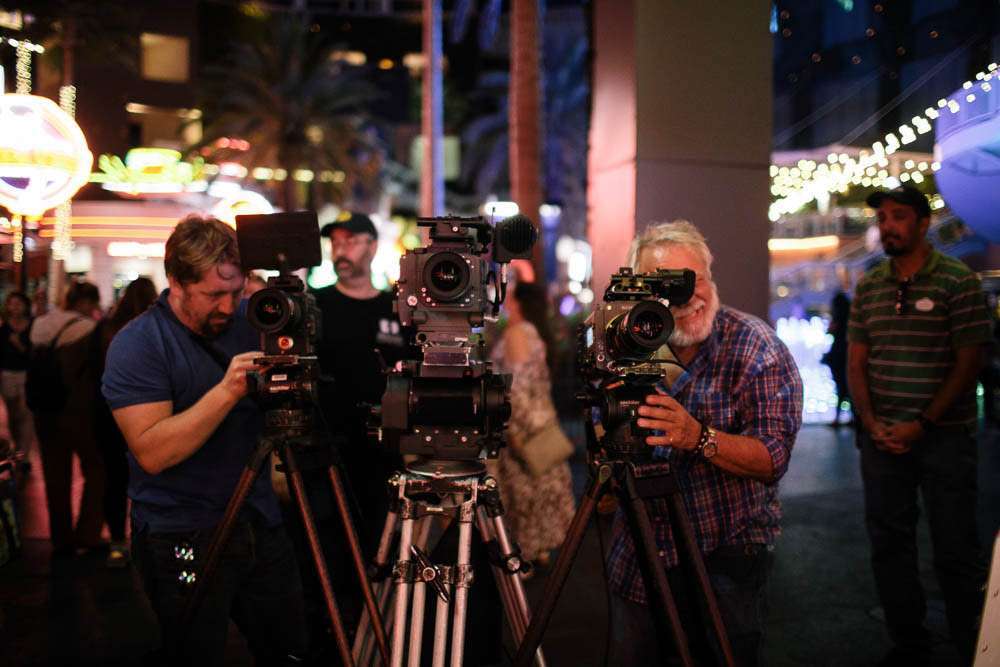 A keystone of the Giant Screen Cinema Association’s (GSCA) strategic plan is to build a pipeline of quality educational and entertaining content. To fulfill that plan, GSCA, through its Technical Committee, has conducted a number of tests in the past four years to help filmmakers capture the best images possible for the giant screen.

It started in 2014 with two iterations of Bring Back Our Wide Shots (BBOWS), with the main goal of testing whether images from the latest 4K digital cameras could meet what could be attained on 15/70 film. Cameras used for this test were the Sony F65, Canon C500, Red Dragon, RED Epic, Arri Alexa XT, and IMAX Film.

When the results were presented at the 2015 GSCA Los Angeles Film Expo and Filmmaker Symposium and then again at the 2015 GSCA Conference technical session in San Francisco, the majority opinion was that capturing in digital was quite close to, and nearly as good as, images captured on film.

Next came Saving Our Aspect Ratio (SOAR) in 2017, which tested how to best shoot 4:3 aspect ratio and preserve that ratio for the giant screen. For this test, only digital cameras were used: the Alexa 65 and Red 8K Super. The results of this test were presented at the 2017 Conference in Chicago. Many in the industry feel the 4:3 aspect ratio is what sets the giant screen experience apart from other cinema formats and that with 16:9 or 1.85 the vertical impact of scenes is lost. Additionally, maintaining this aspect ratio is especially important to domes so that the image covers a larger percentage of the screen and doesn’t appear as a rectangular window inset into a dome surface.

The latest test is the 8K Digital Camera Comparison (8KDCC), which GSCA conducted in July 2018, to demonstrate the strengths of five higher-than-6K-resolution cameras: The Arri Alexa 65, Canon 6700 Full Frame, Panavision DXL2, Red Weapon Monstro Vista Vision, and Sony Venice. The goal of this test was to show filmmakers how each performs in various shooting situations. Each camera may excel in different situations, and filmmakers will be able to decide for themselves which to use in various shots. This test included more cinematic shots than the previous tests, with setups that included dynamic range, resolution charts, beauty shots with moving detail, various lighting (sunlight, magic hour, nighttime, indoors), fine detail performance in wide shots, different flesh tones, and aspect ratios for cropped and with frame extensions.

We did everything we could to challenge the full range of all the cameras. Los Angeles shooting locations for the 8KDCC included the Paramount Ranch, featuring bright sunlight with static and moving details, shots of trees and tiny leaves rustling in the wind, high contrast and shadows on the buildings, and bright reflections. A downtown LA shoot included a rooftop terrace at magic hour with all cameras rolling simultaneously, a nighttime cityscape to show low light and high detail, and interior high-contrast shots. An early morning shoot at the Walt Disney Concert Hall captured the sunrise and architectural details. Water features and high light activity against a dark background to show dynamic motion and contrast were shot at Grand Park. The shoot at CityWalk (the location for the GSCA 2019 Film Expo and Filmmaker Symposium) included neon lights, dynamic motion and contrast, magic hour with all cameras rolling simultaneously, and night shots with low light, neon, and detailed movement. All shots also included tilt-up capture and set extension so we can do aspect ratio experiments. In addition to the location shoots, we also shot indoors to capture resolution charts and sharpness, actors for skin tone tests, and general interior shots with lighting.

Click here for further details about the cameras and locations.

One challenge of any digital system is fine detail. The high frequency, fine detail of digital capture makes the viewer believe they are watching something live rather than giving it the traditional motion picture effect. And while 4K laser projection looks really good, if images are shot in 8K and projected in 4K, they’ll look even better. The sides of the image can then be cropped to bring it to a 4:3 aspect ratio, allowing it to maintain 4K quality and be projected in classic giant screen theaters. Depending on the camera, the image may even be 6K horizontally.

The team shot much more than will be included in the technical session this fall, so this footage will be useful for a number of future demos. The next steps for the 8KDCC are to crop all the 1.9 images to 4:3 aspect ratio to produce 6K x 4K resolution; however, the crew captured shot extensions for nearly every scene by tilting the cameras up and shooting above the original composition. These can be composited in at a later time to produce 8K x 6K imagery.

The test results will be shown at the Tennessee Aquarium IMAX Theater during the technical session on Saturday, September 22, 1:30-3:00 pm, and during the digital dome presentation by Evans & Sutherland and Christie at the McWane Science Center on Dome Day on September 24. We hope round two of this test, to be shown at the GSCA Filmmaker Symposium in Los Angeles on March 13, 2019, will include the shot extensions with the original shots to create 8K x 6K resolution.

Register here for the GSCA conference

We would like to thank the following for their help with the GSCA 8KDCC:

Joe Kleimanhttp://wwww.themedreality.com
Raised in San Diego on theme parks, zoos, and IMAX films, Joe Kleiman would expand his childhood loves into two decades as a projectionist and theater director within the giant screen industry. In addition to his work in commercial and museum operations, Joe has volunteered his time to animal husbandry at leading facilities in California and Texas and has played a leading management role for a number of performing arts companies. Joe has been News Editor and contributing author to InPark Magazine since 2011. HIs writing has also appeared in Sound & Communications, LF Examiner, Jim Hill Media, and MiceChat. His blog, ThemedReality.com takes an unconventional look at the attractions industry. Follow on twitter @ThemesRenewed Joe lives in Sacramento, California with his fiancé, two dogs, and a ghost.
Share
Facebook
Twitter
Linkedin
Email
Print
WhatsApp
Pinterest
ReddIt
Tumblr
Previous articleUSITT and Purdue University hold inaugural US Entertainment – Engineering Summit
Next articleSix Flags launches membership rewards program