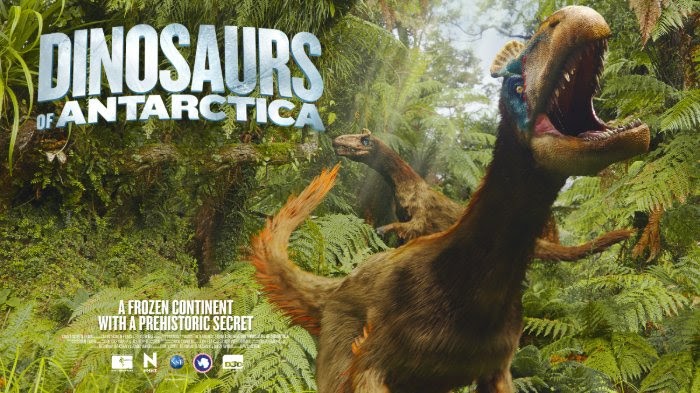 After consulting with many of its museum partners, and based on the realities of the COVID-19 pandemic, Giant Screen Films (GSF) has decided to move the release of its highly anticipated large-format film Dinosaurs of Antarctica to February 2021.

“Obviously these are challenging times, but we are grateful to the many theaters—over 80 to date—who have signed on to run the film in early 2021 and beyond,” said Don Kempf, President of GSF. “We had an outstanding screening at the GSCA spring conference, and as a result have added to the list of theaters running the film during our new launch window.”

Dinosaurs of Antarctica chronicles a prehistoric world now lost to ice, a 250 million-year odyssey from the Permian ice age through the warm and lush Age of Dinosaurs – and back again to the frozen desert we know today. The film received major funding by the National Science Foundation.

“We are excited to take full advantage of the NSF educational and outreach initiatives going forward, with schools, camps and other groups returning to museums in the spring and summer, historically the high-season for field trips,” said Andy Wood, Senior Vice President of GSF. “All of the activity that was planned for 2020 will simply be shifted to 2021 and beyond. Furthermore we are taking this year to produce a suite of additional promotional and marketing assets to augment what was already primed to be an outstanding launch.”

Joe Kleimanhttp://wwww.themedreality.com
Raised in San Diego on theme parks, zoos, and IMAX films, InPark's Senior Correspondent Joe Kleiman would expand his childhood loves into two decades as a projectionist and theater director within the giant screen industry. In addition to his work in commercial and museum operations, Joe has volunteered his time to animal husbandry at leading facilities in California and Texas and has played a leading management role for a number of performing arts companies. Joe previously served as News Editor and has remained a contributing author to InPark Magazine since 2011. HIs writing has also appeared in Sound & Communications, LF Examiner, Jim Hill Media, The Planetarian, Behind the Thrills, and MiceChat His blog, ThemedReality.com takes an unconventional look at the attractions industry. Follow on twitter @ThemesRenewed Joe lives in Sacramento, California with his wife, dog, and a ghost.
Share
Facebook
Twitter
Linkedin
Email
Print
WhatsApp
Pinterest
ReddIt
Tumblr
Previous articleSara Seay awarded Paragon Award for excellence in marketing by New England Association of Amusement Parks and Attractions
Next articleLucas Museum of Narrative Art announces six new hires in leadership roles

Technifex: Bring us your impossible ideas