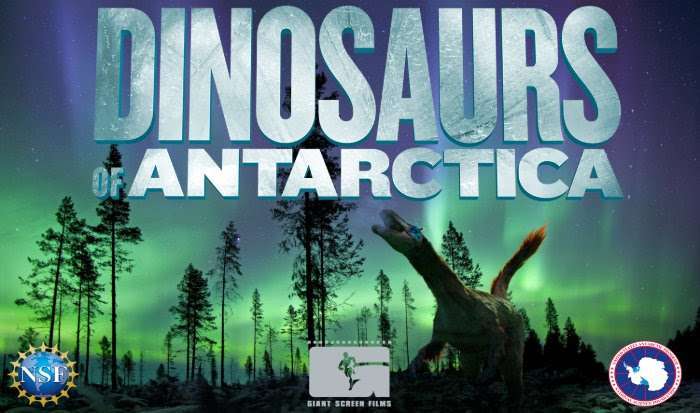 Dinosaurs of Antarctica, GSF’s latest production, launched this month at giant screen and other immersive theaters worldwide. With over 75 museum-based theaters signed on thus far, the film promises to be one of the most successful giant screen releases of 2020 and beyond. Featuring top-tier computer graphics from the studio responsible for visual effects in Bladerunner 2049, Life of Pi and other blockbuster Hollywood titles, Dinosaurs of Antarctica brings to life a fascinating cast of dinosaurs and other strange creatures, new to audiences and to science.

From the Permian through the Jurassic, journey to the south polar landscapes of Antarctica hundreds of millions of years ago. Roam the primitive forest and thick swamps with bizarre dinosaurs and colossal amphibians. Enter a surreal world of bug-eyed giants and egg-laying mammals – where survival means enduring the sunless, six-month polar winter surrounded by meat-eaters with night vision. Join intrepid Antarctic scientists on a quest to understand the ice continent’s profound transformation over deep time — investigating the parallels and differences between prehistoric climate events and human-triggered warming today.

“We are thrilled by the incredible degree to which the giant screen theater network has supported this film. Our production and creative teams have been working tirelessly for several years now, so it is all very gratifying,” said Don Kempf, President of GSF.  “In addition to the theater premieres, we’re looking forward to a busy month of engagements this spring, including a congressional screening on Capitol Hill and a series of showcase events with NSF, NASA, the DC Environmental Film Festival and at SXSW.”

“Support from the National Science Foundation and from our science advisors has helped us take advantage of this great topic,” said Deborah Raksany, producer. “Our outreach program will allow public audiences and school groups to explore Antarctica through hands-on interactions with scientists, programs with award-winning writer Greg Neri, and a suite of engaging activities developed by our project partner, Discovery Place.”

Joe Kleimanhttp://wwww.themedreality.com
Raised in San Diego on theme parks, zoos, and IMAX films, Joe Kleiman would expand his childhood loves into two decades as a projectionist and theater director within the giant screen industry. In addition to his work in commercial and museum operations, Joe has volunteered his time to animal husbandry at leading facilities in California and Texas and has played a leading management role for a number of performing arts companies. Joe has been News Editor and contributing author to InPark Magazine since 2011. HIs writing has also appeared in Sound & Communications, LF Examiner, Jim Hill Media, and MiceChat. His blog, ThemedReality.com takes an unconventional look at the attractions industry. Follow on twitter @ThemesRenewed Joe lives in Sacramento, California with his fiancé, two dogs, and a ghost.
Share
Facebook
Twitter
Linkedin
Email
Print
WhatsApp
Pinterest
ReddIt
Tumblr
Previous articleGlobal attractions industry reacts to coronavirus outbreak
Next articlePainting with Light creates high-energy lighting scheme for Qatar eSports WEGA Global Games opening ceremony