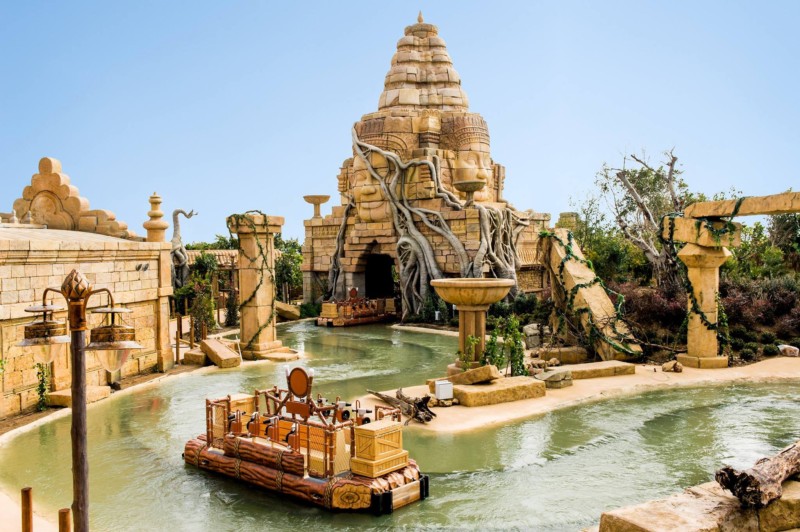 [quote]In keeping with the meticulous attention to atmospheric detail that characterizes PortAventura, Angkor: Adventure in the Lost Kingdom is an ambitious recreation of Cambodian temples and jungles, including Hindu and Buddhist references.”[/quote]

Salou, Spain — In recent years, PortAventura has pursued a strategy of continuous expansion with the goal of making the resort a class-leading holiday destination in Europe. To achieve this, it has adopted an internationalization strategy and incorporated new projects every year, investing over €125 million since 2010.

This development plan will continue in the near future with “Ferrari Land”, a new theme park dedicated to the Cavallino Rampante (Ferrari‟s famous “Prancing Horse” logo), and the first Ferrari-themed hotel after PortAventura reached a licensing agreement with the Italian carmaker. The plan is also responsible for two important additions to PortAventura this season: the arrival of Cirque du Soleil as a major feature for the summer and the launch of a spectacular new attraction – Angkor: Adventure in the Lost Kingdom. 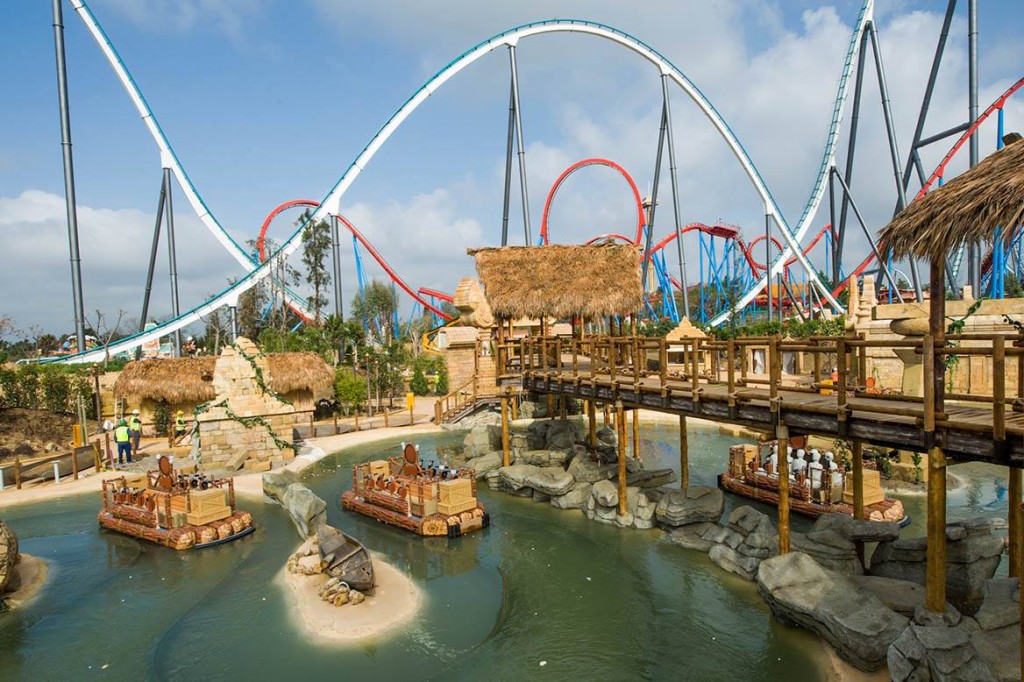 Inspired by the jungles of Asia, this star attraction of 2014 is a ‘battle-boat’ water ride. Its long, ten-minute on-ride time and incredible theme detail make it a leader in its class in Europe. This theming is key to reproducing the ancient temples and lush jungles of Cambodia, making visitors of all ages feel like real adventurers as they explore this fun and exciting environment.

Further refreshing surprises are in store as they use the water-cannons mounted to their rafts to take on interactive challenges. They‟ll discover mysterious villages, snakes rising from the water, tigers hiding in dark caves, monkeys inhabiting ruined temples, and magnificent stone elephants. Passengers can shoot at the targets they find on their way with their water jets or even take aim at other boats and onlookers.

Angkor covers 10,500 m2, a huge space which is almost the equivalent of a complete theme area, and offers a journey time of about 10 minutes. This makes it one of the longest boat ride attractions in Europe. It has been designed by MACK Rides, owner of Germany’s Europa Park and one of the world’s leading manufacturers of resort attractions. Angkor has 14 boats, each seating up to 8 people, and an hourly capacity of 726 people.

Continuous innovation is a priority for PortAventura. That’s why visitors to the resort this year will enjoy free Wi-Fi. It is being progressively rolled out over the park and all four hotels and should cover almost the entire resort by the beginning of high season. Once completed, PortAventura will have the best Wi-Fi coverage of any resort in Europe. To get online, visitors simply need to register using Facebook or their e-mail address.

Another new feature can be found in PortAventura’s Polynesia area: a movie called Submarine Odyssey 4D. Explorers who board the Sea Odyssey submarine can join the crew and take part in an intrepid underwater mission. They’ll find stunning aquatic landscapes, mysterious sea creatures, secret caves, sunken ships and even the ruins of lost civilizations that have disappeared beneath the waves and now form the stage for a thousand undersea adventures.

The season also sees the curtain being raised on a range of new and improved shows and performances. The first, for those who can handle extra excitement after their Angkor ride expedition, is Los Misterios de Angkor (The Mysteries of Angkor), featuring six fantastic acrobats who deliver a jaw-dropping performance of spinning and tumbling virtuosity.

Generation Forever, in the China area’s Gran Teatro Imperial, is a must-see for music lovers. It takes visitors on a round-the-world journey through the music of the 50s, 60s, 70s and 80s, right up to the present day. 13 dancers, 2 singers and 8 acrobats – including 2 from Cirque de Soleil – put on a colourful show full of amazing choreography and performances.

La Magia del Far West (The Magic of the Far West), in PortAventura’s famous Saloon, is an adventure in the company of two crazy magicians who dazzle visitors with their trickery and sleight-of-hand. There is plenty of humour and laughter as objects magically appear and disappear in this fun-filled family show. 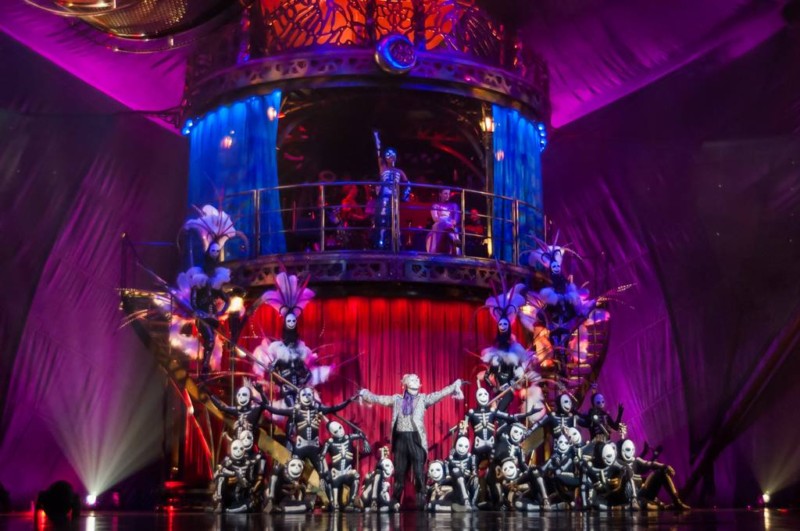 As well as Angkor: Adventure in the Lost Kingdomand the new shows, PortAventura has another huge attraction for visitors this summer: the world-famous Cirque du Soleil. Their latest production, KOOZA, is an unsurpassable adventure full of acrobats, clowns and circus excitement. PortAventura is the first resort in Europe to host Cirque du Soleil and more than 2,400 visitors will enjoy the show each day.

Joe Kleimanhttp://wwww.themedreality.com
Raised in San Diego on theme parks, zoos, and IMAX films, InPark's Senior Correspondent Joe Kleiman would expand his childhood loves into two decades as a projectionist and theater director within the giant screen industry. In addition to his work in commercial and museum operations, Joe has volunteered his time to animal husbandry at leading facilities in California and Texas and has played a leading management role for a number of performing arts companies. Joe previously served as News Editor and has remained a contributing author to InPark Magazine since 2011. HIs writing has also appeared in Sound & Communications, LF Examiner, Jim Hill Media, The Planetarian, Behind the Thrills, and MiceChat His blog, ThemedReality.com takes an unconventional look at the attractions industry. Follow on twitter @ThemesRenewed Joe lives in Sacramento, California with his wife, dog, and a ghost.
Share
Facebook
Twitter
Linkedin
Email
Print
WhatsApp
Pinterest
ReddIt
Tumblr
Previous articleAudubon Aquarium of the Americas Joining Other AZA Member Zoos and Aquariums in Celebrating Party for the Planet
Next articleAttractions Based On Fox’s “Ice Age” Franchise Headed to Indonesian Theme Park