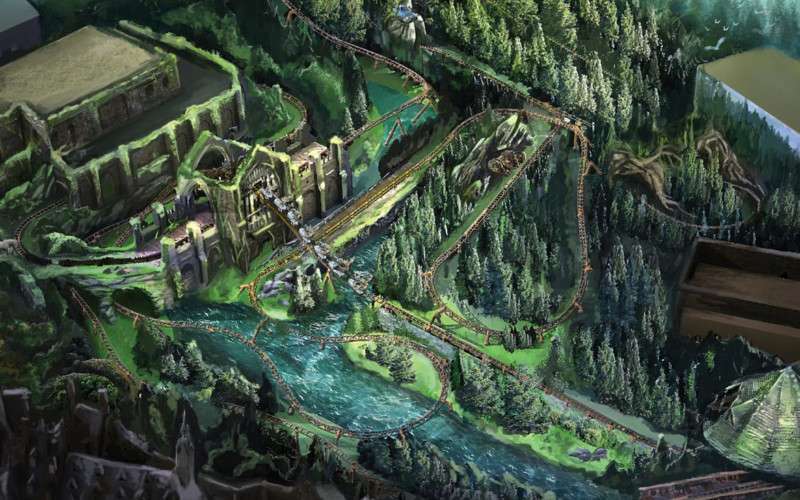 On June 13, 2019, Hagrid’s Magical Creatures Motorbike Adventure – the epic new addition to The Wizarding World of Harry Potter – will soar into Universal Orlando Resort and become the most highly themed, immersive coaster experience yet. Now, all-new details have been revealed about the magical new adventure that awaits.

Hagrid’s Magical Creatures Motorbike Adventure will combine a new level of storytelling and innovative coaster technology with rich environments and sets – including an actual forest with more than 1,200 live trees. It will also give guests the unique opportunity to join Hagrid – one of the most beloved characters in the Harry Potter films – on a journey to one of the most mysterious places in the wizarding world – the Forbidden Forest. With Hagrid as their guide, guests will fly deep into the Forbidden Forest and brave the mysteries and thrills beyond the grounds of Hogwarts castle on a groundbreaking coaster experience unlike any other.

It all begins when guests (starting at 48” tall) join Hagrid’s Care of Magical Creatures class and board magical motorbikes specially designed to make them feel the freedom of flight. Guests will either ride the motorcycle or board the adjacent sidecar as they embark on a journey that will bring them closer to some of the wizarding world’s rarest magical creatures.  But as they make their way through the Forbidden Forest…things don’t go as planned. During the adventure, guests will:

Experience a freewheeling coaster flight where they’ll twist, turn and rush forward – and backward – at speeds up to 50 mph into the dark forest

Encounter some of the wizarding world’s rarest magical creatures, such as a majestic Centaur, a swarm of mischievous Cornish Pixies, Fluffy, the three-headed dog – and even a creature that’s never been seen in the films

Hurl past challenging obstacles, become entangled in a thicket of Devil’s Snare and so much more …while encountering a few surprises along the way.

Hagrid’s Magical Creatures Motorbike Adventure will be located in The Wizarding World of Harry Potter – Hogsmeade at Universal’s Islands of Adventure.

Joe Kleimanhttp://wwww.themedreality.com
Raised in San Diego on theme parks, zoos, and IMAX films, InPark's Senior Correspondent Joe Kleiman would expand his childhood loves into two decades as a projectionist and theater director within the giant screen industry. In addition to his work in commercial and museum operations, Joe has volunteered his time to animal husbandry at leading facilities in California and Texas and has played a leading management role for a number of performing arts companies. Joe previously served as News Editor and has remained a contributing author to InPark Magazine since 2011. HIs writing has also appeared in Sound & Communications, LF Examiner, Jim Hill Media, The Planetarian, Behind the Thrills, and MiceChat His blog, ThemedReality.com takes an unconventional look at the attractions industry. Follow on twitter @ThemesRenewed Joe lives in Sacramento, California with his wife, dog, and a ghost.
Share
Facebook
Twitter
Linkedin
Email
Print
WhatsApp
Pinterest
ReddIt
Tumblr
Previous articleWorld Wheel Company presents new video flythrough of Giants on the Quayside development
Next articleBetson Enterprises to showcase new games at Amusement Expo 2019