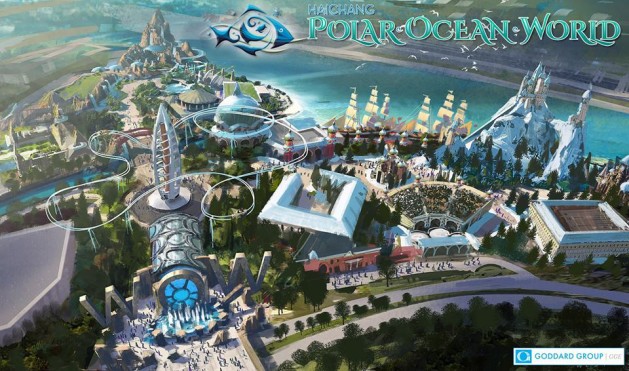 Hong Kong — Haichang Holdings Ltd. (“Haichang Holdings” or the “Company”, together with its subsidiaries, the “Group”), (Stock Code: 2255), a leading developer and operator of theme parks and ancillary commercial properties inChina, is pleased to announce that the ownership of Shanghai Haichang Polar Ocean World’s land use rights was successfully obtained, which marks the official kick-off of the project. Conceptual design and master planning of the park has been completed by the Gary Goddard Group, who is continuing to work with Haichang on additional park design.

Differentiated from the traditional marine theme park model, Shanghai Haichang Polar Ocean World, will position itself as a world-class marine life culture experience complex. The park is set to commence operation in 2017 and will set the benchmark in the domestic industry for innovation and thought leadership. Adhering to the development concept of building “Marine-themed Culture”, the park will bring together a holistic integration of entertainment, ecology, and the scientific in an extremely interactive way, to create the foremost sustainable tourism product system, whilst building a “Situational Experience Resort”.

In order to build a brand new world-class flagship marine theme park, Haichang Holdings has commissioned a number of key international firms to aid with the strategic positioning of the project and the overall concept development. The park will be co-designed by internationally renowned design companies that also participated in the Disney and SeaWorld projects. The design will integrate the traditional exhibition of marine life with advanced high-tech solutions, to improve the interactivity and participation of the park’s attendees. Additionally, the Company is also planning to commission a professional team with international experience to be responsible for the preparation of project construction and operational management in the future.

Mr. Wang Xuguang, Chief Executive Officer of Haichang Holdings, said, “The Shanghai Project is the seventh polar ocean world project launched by the Company. In terms of in-park infrastructure, the project is consistently being identified by our peers as a pioneer in the field, from concept development to design and construction of facilities. The ethos of high quality, has also been meticulous implied when considering project planning and the overall visitor experience from product positioning, total number of animals, display design, in addition to the development of diversified products and diagnosis of core market value. Haichang Holdings has fully prepared for the success of the Shanghai Project. As a world-class flagship marine theme park, the Shanghai Haichang Polar Ocean World will showcase a wide range of polar marine species. It will also host significant entertainment features such as large marine science based entertainment facilities, and an omnimax movie theatre. We are determined to ensure the Shanghai Project will be on par with the industry’s global first-tier standards in the areas of animal science exhibition, education, theme entertainment and high technology.”

Located by Dishui Lake in Lingang New City, Nanhui District, Shanghai, Shanghai Haichang Polar Ocean World enjoys a superior location and transportation conditions. It takes about an hour and a half’s drive from downtownShanghai and about half an hour’s drive from Pudong International Airport. With nearby Metro Line No. 16 directly connecting to Longyang Road in Central Pudong, Shanghai Haichang Polar Ocean World is highly accessible. Lingang New City is located in the southeast side ofShanghai and is positioned as a harmonious and livable new city with a Marine-themed culture and leisure and tourism as its key features. As the target area of the project, the Yangtze River Delta has a population of approximately 200 million, with the highest GDP and the strongest per capita income and purchasing power inChina, It is positioned to become one of the main growth engines ofShanghai in the next 20 years considering the large amount of tourist arrivals after the project commences operation.

According to the 12th Five-Year Development Plan of Shanghai’s tourism industry, the Shanghai Government will accelerate the development ofShanghai as a world-renowned tourism city, forming a new tourism development landscape, which will be known as “One Circle, Four Zones, Three Belts, and One Island“. As part of the Business Exhibition and Theme Recreation Tourism Zone of the “Four Zones”, Shanghai Haichang Polar Ocean World and Shanghai Disney Resort (under construction) will be major projects inShanghai’s overall development planning. The two projects are about 30 minutes’ drive from each other. After the two projects commence operation, tourists can arrange their schedule to include both tourism spots, as they will each bring toShanghai two entirely different experiences, thereby coexisting synergistically. In 2015, Shanghai Disney Resort will officially commence operation in Chuansha, Pudong District, thus joining hands with Shanghai Haichang Polar Ocean World to form the biggest tourism destination and world-class tourism city core area inEast Asia. Shanghai Haichang Polar Ocean World and Shanghai Disney Resort are realizing a win-win business model.

As such, Haichang Holdings has recently entered into a three-year term memorandum of cooperation with Hong Kong Ocean Park to carry out extensive cooperation in areas of talent, technology, marketing promotion and business cooperation. This partnership will also extend into the areas of research and development on animal welfare equipment, and operation and management, along with commercial support for the whole project. Haichang Holdings is also actively seeking international partners with professional advantages in an effort to enhance the project’s overall attraction and operational strength.

Considering the future growth potential of the regional market, Haichang Holdingsexpect a steady yearly increase in tourists after the project commences operation. Shanghai Haichang Polar Ocean World’s differentiation in market positioning, and diversified product range, will ensure the project achieves a healthier revenue stream and increased per customer spending. The project’s internal rate of return will be at the upper end of the industry spectrum. The construction and operation of Shanghai Haichang Polar Ocean World will further consolidate Haichang Holdings’ leading position in segmented markets, effectively improving the Group’s overall revenue and profitability; leading to higher valuation of the listed company.

Listed on the Main Board of The Stock Exchange of Hong Kong in March 2014, Haichang Holdings Ltd. is the largest developer and operator of theme parks and ancillary commercial properties inChina. With over a decade of experience in animal breeding and conservation, marine theme park development and operation, the Company has consistently ranked as one of the top ten theme park operators worldwide in 2012 and 2013. The Company’s theme parks provide a one-stop leisure, dining and shopping experience to its customers through both the in-park offerings and complementary services offered by the ancillary commercial properties adjacent to the theme parks. The Company currently operates eight theme parks located inDalian, Qingdao, Tianjin, Yantai, Wuhan, Chengdu and Chongqing respectively.

China’s theme park industry possesses enormous growth potential and has maintained a CAGR of more than 10% in the past five years. As the new central government seeks to adjustChina’s economic structure, more policies will be issued to promote the development of the tourism industry. As a leader of this industry, Haichang Holdings will directly benefit from such policies.

Joe Kleimanhttp://wwww.themedreality.com
Raised in San Diego on theme parks, zoos, and IMAX films, Joe Kleiman would expand his childhood loves into two decades as a projectionist and theater director within the giant screen industry. In addition to his work in commercial and museum operations, Joe has volunteered his time to animal husbandry at leading facilities in California and Texas and has played a leading management role for a number of performing arts companies. Joe has been News Editor and contributing author to InPark Magazine since 2011. HIs writing has also appeared in Sound & Communications, LF Examiner, Jim Hill Media, and MiceChat. His blog, ThemedReality.com takes an unconventional look at the attractions industry. Follow on twitter @ThemesRenewed Joe lives in Sacramento, California with his fiancé, two dogs, and a ghost.
Share
Facebook
Twitter
Linkedin
Email
Print
WhatsApp
Pinterest
ReddIt
Tumblr
Previous articleInaugural Women of InfoComm Network Breakfast to Take Place at ISE 2015
Next articleThinkwell Group In-House Counsel Aamna Jalal Honored by Association of Media & Entertainment Counsel