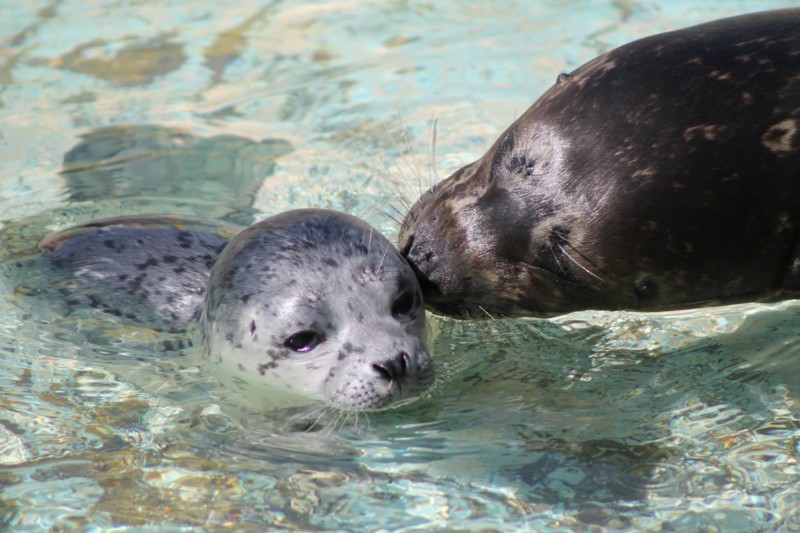 “We expected the birth to happen any time over the past few weeks,” said Michael Muraco, animal care director. “Seal births are particularly unique in that the pup starts swimming within a few minutes after birth. Within a few hours, they’re already exploring.”

The Seal Cove exhibit was closed to the public the day of the birth, but the park posted a photo of the pup via social media. The exhibit reopened on Easter Sunday to the delight of guests who had an opportunity to see the newborn swim, sleep and nurse.

Pacific harbor seals, also known as true seals, are pinnipeds, and differ from sea lions in a number of ways, including having shorter, stouter flippers and no visible earflaps. When swimming, they use their hind flippers to propel through the water. Though not endangered, harbor seal colonies in the San Francisco Bay Area are vulnerable to human disturbance, climate change and human-produced pollutants.

Pups double their weight within the first four to six weeks nursing on the rich mother’s milk, which is about 45 percent fat, and then is weaned. In the wild, a mother will leave its pup after the first month to finish growing and fend for itself.

Joe Kleimanhttp://www.themedreality.com
Raised in San Diego on theme parks, zoos, and IMAX films, Joe Kleiman would expand his childhood loves into two decades as a projectionist and theater director within the giant screen industry. In addition to his work in commercial and museum operations, Joe has volunteered his time to animal husbandry at leading facilities in California and Texas and has played a leading management role for a number of performing arts companies. Joe has been News Editor and contributing author to InPark Magazine since 2011. HIs writing has also appeared in Sound & Communications, LF Examiner, Jim Hill Media, and MiceChat. His blog, ThemedReality.com takes an unconventional look at the attractions industry. Follow on twitter @themedreality Joe lives in Sacramento, California with his fiancé, two dogs, and a ghost.
Share
Facebook
Twitter
Linkedin
Email
Print
WhatsApp
Pinterest
ReddIt
Tumblr
Previous articleReynolds Polymer Provides Windows to the Underwater Worlds of Chimelong Ocean Kingdom
Next articleShannon Lucid and Jerry Ross to be Inducted into Astronaut Hall of Fame During Ceremony at Space Shuttle Atlantis Attraction