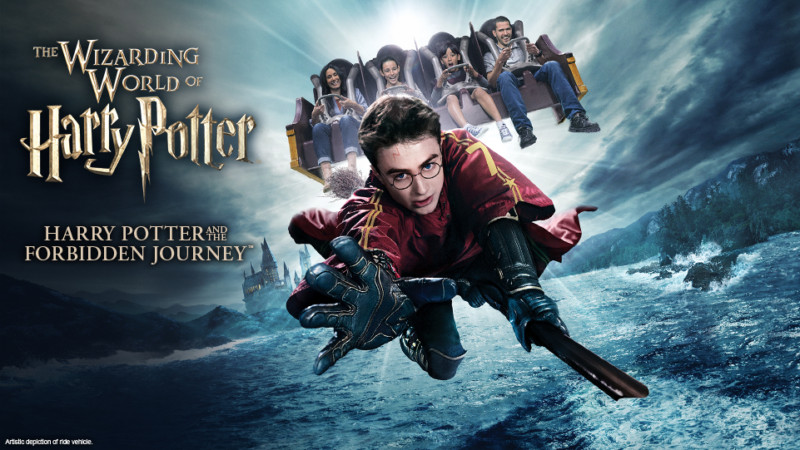 The benchmark “Harry Potter and the Forbidden Journey” thrill ride at Universal Studios Hollywood’s “The Wizarding World of Harry Potter™” has introduced enhanced 4K-HD ride film projection at a rate of 120 frames-per-second, designed to offer guests an even more immersive glimpse into J.K. Rowling’s Wizarding World.

This progressive enhancement replaces the earlier 3D film component of the ride to create a seamless integration between the ride’s elaborate sets and its spellbinding media. The attraction’s storyline remains the same.

Spiraling and pivoting 360-degrees upon an elevated ride track, “Harry Potter and the Forbidden Journey” ushers guests on a journey alongside Harry Potter, Hermione Granger and Ron Weasley as they venture through some of the most memorable scenes from the movie, including a Quidditch match where they narrowly escape a dragon attack, as well as close encounters with Dementors and the Whomping Willow.

A unique attraction unto itself, the iconic and picturesque Hogwarts castle sits at the heart of “The Wizarding World of Harry Potter” providing access to Hogwarts School of Witchcraft and Wizardry. Hogwarts castle is an accurate reproduction from the movie, housing narrow stone passageways and chambers that invites guests to walk in the famous footsteps of the film’s heroic character where they will encounter many familiar places along the way, including the Mirror of Erised, Professor Sprout’s Herbology class and a selection of baby Mandrakes, Dumbledore’s office, the Defence Against the Dark Arts classroom, the Hall of Talking Portraits, the Fat Lady portrait at the entrance to the Gryffindor Common Room and the Sorting Hat.

From its snow-capped roofs and cobblestone streets to the historic British sensibilities that characterize the whimsical look and feel of the land, “The Wizarding World of Harry Potter” transports guests of all ages to the very places they read about in the stories or watched on the silver screen.

“The Wizarding World of Harry Potter” resonates with immense detail, inviting guests to revel in Harry Potter’s world with the opportunity to enjoy authentic food and beverages at multiple locations, including Three Broomsticks™ and Hog’s Head pub, as well as the Magic Neep and Butterbeer™ carts.

Joe Kleimanhttp://wwww.themedreality.com
Raised in San Diego on theme parks, zoos, and IMAX films, InPark's Senior Correspondent Joe Kleiman would expand his childhood loves into two decades as a projectionist and theater director within the giant screen industry. In addition to his work in commercial and museum operations, Joe has volunteered his time to animal husbandry at leading facilities in California and Texas and has played a leading management role for a number of performing arts companies. Joe previously served as News Editor and has remained a contributing author to InPark Magazine since 2011. HIs writing has also appeared in Sound & Communications, LF Examiner, Jim Hill Media, The Planetarian, Behind the Thrills, and MiceChat His blog, ThemedReality.com takes an unconventional look at the attractions industry. Follow on twitter @ThemesRenewed Joe lives in Sacramento, California with his wife, dog, and a ghost.
Share
Facebook
Twitter
Linkedin
Email
Print
WhatsApp
Pinterest
ReddIt
Tumblr
Previous articleMadame Tussauds Introduces First Projection Mapped Wax Figure
Next articleTurbo Track Takes Ferrari World Abu Dhabi Riders Above the Roof