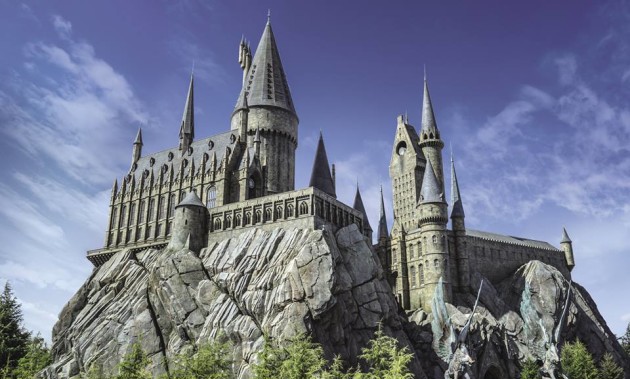 Osaka, Japan (May 21, 2012) — To celebrate greater magic in the second year at The Wizarding World of Harry Potter in Universal Studios Japan, a ceremony for the announcement of “New Magical Experience” and its advance premiere was held Wednesday, May 20th.

The world’s leading attraction “Harry Potter and the Forbidden Journey” has been evolved into 3D and will open today as the first and only in the world.  With Harry Potter film talent Tom Felton and Katie Leung, and Universal Studios Japan’s ambassador SMAP, a spell was cast upon the magnificent Hogwarts castle to celebrate the opening of this new experience. 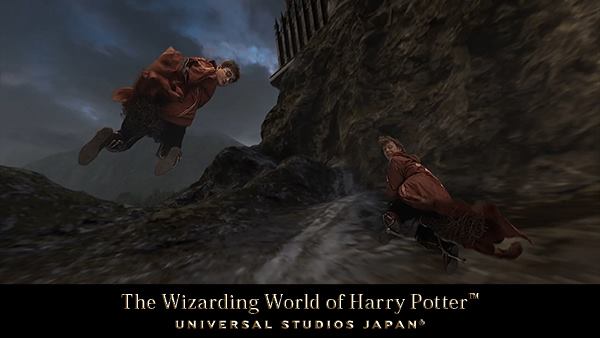 Thunderous cheer was heard from three hundred Harry Potter fans wearing scarves of Hogwarts School of Witchcraft and Wizardry at 19:40, when the ceremony started, the members of SMAP, Universal Studios Japan’s ambassadors, appeared on the stage in front of Hogwarts castle, and introduced Harry Potter film talent Tom Felton, who portrayed Harry Potter’s classmate and nemesis Draco Malfoy, and Katie Leung, who portrayed Cho Chang famous for Harry’s first crush, made an appearance with Glenn Gumpel, Chairman and CEO of USJ, Co., when he announced to open “Harry Potter and the Forbidden Journey” in 4K3D, which has been evolved into 3D for the first time. The fans reacted with cheers and surprises.

Along with the fans, they all cast “Expecto Patronum” towards Hogwarts castle. Then the crowd squealed for joy as eagle, rabbit, weasel and stag Patronuses appeared on the walls of Hogwarts, followed by a special display of fireworks. 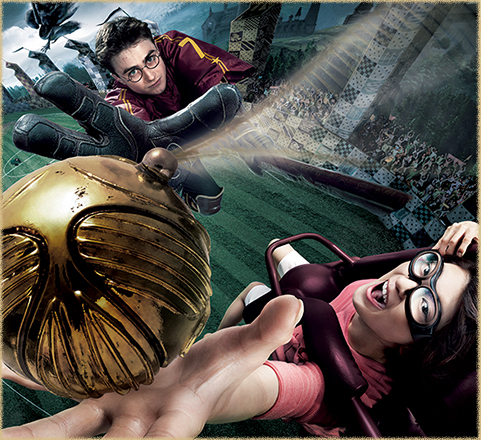 All the celebrities had experienced “Harry Potter and the Forbidden Journey” prior to the ceremony.

Tom commented, “It was always a great ride, now it’s even more immersive. I tried to grab the golden snitch several times. Then Katie said that I tried to grab the snitch but it was unsuccessful. Coming face to face with the dragon and Dementor was terrifying.

SMAP, who participated at the ceremony as Universal Studios Japan’s ambassadors made the following statements. Mr. Inagaki said “ I am not good at ride, but I became addicted to the ride attraction due to this Harry Potter and the Forbidden Journey.” Mr. Kusanagi commented “ It is awesome. I want everybody to experience it.” “Greater Magic in the 2nd Year. I was surprised that Universal Studios Japan made the world best which is beyond the own world best”, said Mr. Katori. “This attraction won’t disappoint the people who experience the ride last year and it is too awesome to remember the previous one “ Mr. Nakai commented. Mr. Kimura said that I was proud of having the world best and 1stentertainment in the world in Japan here.

Joe Kleimanhttp://wwww.themedreality.com
Raised in San Diego on theme parks, zoos, and IMAX films, InPark's Senior Correspondent Joe Kleiman would expand his childhood loves into two decades as a projectionist and theater director within the giant screen industry. In addition to his work in commercial and museum operations, Joe has volunteered his time to animal husbandry at leading facilities in California and Texas and has played a leading management role for a number of performing arts companies. Joe previously served as News Editor and has remained a contributing author to InPark Magazine since 2011. HIs writing has also appeared in Sound & Communications, LF Examiner, Jim Hill Media, The Planetarian, Behind the Thrills, and MiceChat His blog, ThemedReality.com takes an unconventional look at the attractions industry. Follow on twitter @ThemesRenewed Joe lives in Sacramento, California with his wife, dog, and a ghost.
Share
Facebook
Twitter
Linkedin
Email
Print
WhatsApp
Pinterest
ReddIt
Tumblr
Previous articleParques Reunidos Subsidiary Palace Entertainment to Consult on DreamEast Theme Park and Resort Projects in China
Next articleCarnival Vista to Premiere Number of Industry Firsts Including First IMAX Theater on a Cruise Ship