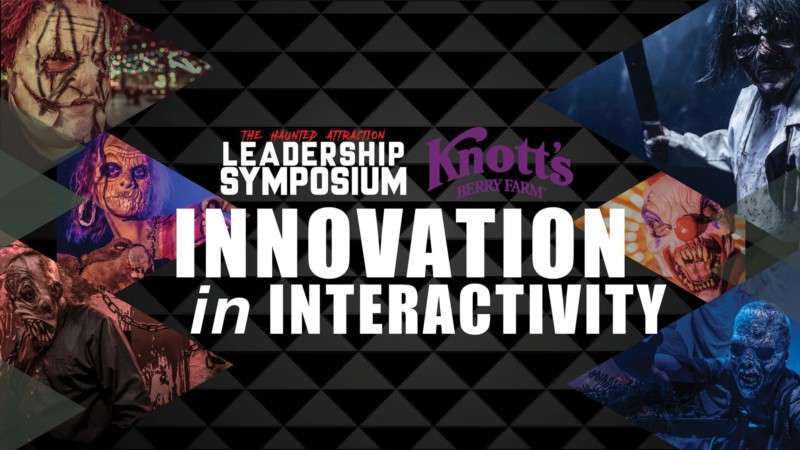 The schedule for the day-long Haunted Attraction Leadership Symposium, “Innovation in Interactivity,” to be held at Knott’s Berry Farm on August 1 has been announced. This symposium, sponsored by the Haunted Attraction Network and Gantom Lighting & Controls, features six keynote talks, each themed on one aspect of interactivity delivered by the industry movers and shakers behind some of the nation’s largest haunts. Also included is a behind-the-scenes tour of a newly redesigned interactive maze at Knott’s Scary Farm.

The symposium runs from 11AM to 10PM, with the following schedule:
10AM to 11AM: Check-in/Registration
11AM to 2PM: Keynote talks.
Speakers include Scott Swenson (The Vault of Souls), Dr. Margee Kerr (The Science of Fear, Scarehouse), Ricky Brigante (Inside The Magic and Pseudonym Productions), Jon Cooke and Ken Parks (Knott’s Scary Farm), Brian Luallen (Queen Mary’s Dark Harbor), and Quan Gan (Gantom and Shanghai Nightmare).
2PM to 3PM: Catered lunch and workshop time
3PM to 4PM: Q&A moderated by the legendary Leonard Pickel
4PM to 8PM: Networking/free time inside Knott’s Berry Farm Park
8PM to 10PM: Guided maze tour and Q&A with Knott’s team

ABOUT THE SPEAKERS AND THEIR PRESENTATIONS

Ricky Brigante is the founder and Editor-in-Chief of InsideTheMagic. He’s also Producer and Technical Director of Pseudonym Productions, an interactive design company specializing in creating uniquely immersive live experiences. In his symposium presentation, “How to Empower Your Audience,” Ricky will talk about how to fully immerse the audience by including them as lead characters in your stories. “I’m thrilled to have the opportunity to speak amongst some of the most prominent leaders in the themed entertainment industry on a topic I’m so passionate about,” says Ricky. “This industry is rapidly changing, and interactivity has become a must. I’m excited to deliver knowledge I’ve gained from experiencing and working on some of the most groundbreaking new forms of entertainment on the planet.”

Dr. Margee Kerr is a sociologist and author. She teaches and conducts research on fear—specifically, how and why people engage with “scary” material. Dr. Kerr is the co-investigator in a first-of-its-kind study that measures how the brain and body respond to “fun-scary” experiences like haunted attractions, paranormal investigations, and thrill rides. “You Want Me to Do What?” is the provocative title of Dr. Kerr’s symposium presentation, in which she’ll be talking about training actors in the science of immersive interactivity.

Ken Parks, Vice President of Entertainment at Knott’s Berry Farm is the mastermind behind many cult classics and favorites in Disney Parks, Universal Studios, and Knott’s including the infamous Haunt presentation, The Hanging. Jon Cooke is involved in Entertainment Design at Knott’s Berry Farm. He’s overseen some of the most interactive mazes at Knott’s Scary Farm including Special Ops: Infected (2014-2016), Paranormal Inc (2015-2016), and ShadowLands (2016). Ken and Jon will discuss some of the logistics behind their scares, but we can’t give away all the details yet.

Brian Luallen is the Director of Attractions at The Queen Mary/Evolution Hospitality. He’s a veteran attractions, special event, and entertainment leader with over 22 years of experience ranging from front line operation to senior management. Brian’s presentation is titled, “Historic Chills: Creating Interactive Experiences in Protected Spaces.” Creating haunted attractions in a protected historic space is a challenge. The crew of The Queen Mary uses unique storytelling and experiential elements not found in any other haunted-house venue along with cutting-edge technology to engage guests all year long. In his talk, Brian will discuss how The Queen Mary works with space instead of against it to create deeper interactive experiences for guests. Brian states, “The Queen Mary is thrilled to be a part of this event. Southern California has some of the unique and successful Halloween events in the country, and it’s exceptional to have this many experts in the world of haunted houses gathered and focused on pushing our guest experiences to the next level!”

Scott Swenson has been bringing stories to life as a producer, director, writer, and performer for more than 30 years. His work in theme parks, consumer events, live theater, and television has provided him with a broad spectrum of experiences. Scott says, “It All Starts with a Story,” which is the name of his presentation for this symposium, in which he’ll talk about why story—not technology and performers—is the most important aspect of any experience. He’ll explain how a strong story can guide both the artistic and operational elements of any attraction. “I’m thrilled to be a part of this ground-breaking event,” says Scott. “It will be a thunderstorm of experience and talent that will come crashing down in one location for one day. Don’t miss it!”

Quan Gan is the CEO of Gantom Lighting & Controls, a manufacturer of specialty lighting and interactive equipment for theme attractions. Quan was inspired after being an actor in a haunted house during college years, which ultimately led him to quit his job and start the first Halloween Haunted Attraction in Mainland China with his wife, Charlie Xu. Gantom Lighting & Controls was spun off in year two when he realized the huge niche potential for lighting small and dark spaces for theme attractions.

A NOTE ABOUT TICKETS

Tickets will NOT be available at the door and may be purchased online here: https://www.eventbrite.com/e/the-haunted-attraction-leadership-symposium-tickets-32580232352#tickets

Joe Kleimanhttp://wwww.themedreality.com
Raised in San Diego on theme parks, zoos, and IMAX films, InPark's Senior Correspondent Joe Kleiman would expand his childhood loves into two decades as a projectionist and theater director within the giant screen industry. In addition to his work in commercial and museum operations, Joe has volunteered his time to animal husbandry at leading facilities in California and Texas and has played a leading management role for a number of performing arts companies. Joe previously served as News Editor and has remained a contributing author to InPark Magazine since 2011. HIs writing has also appeared in Sound & Communications, LF Examiner, Jim Hill Media, The Planetarian, Behind the Thrills, and MiceChat His blog, ThemedReality.com takes an unconventional look at the attractions industry. Follow on twitter @ThemesRenewed Joe lives in Sacramento, California with his wife, dog, and a ghost.
Share
Facebook
Twitter
Linkedin
Email
Print
WhatsApp
Pinterest
ReddIt
Tumblr
Previous article
Virginie Guilbeault and Louis Parent Promoted at Vortex Aquatic Structures
Next article
Anne Herzog Joins Mad Systems