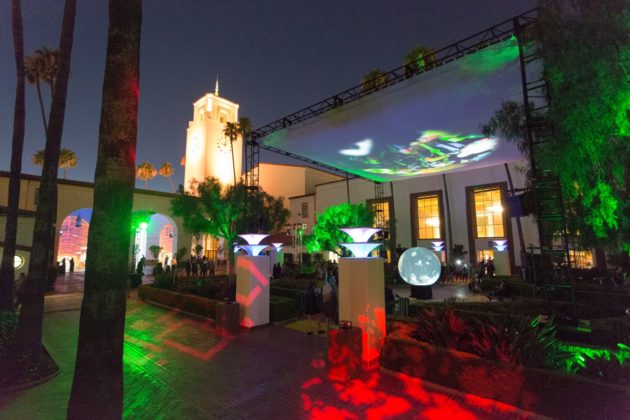 Pasadena, CA, USA – The Hettema Group (THG) recently completed a successful multisensory experience for Los Angeles Metropolitan Transportation Authority (LAMTA), transforming a portion of Los Angeles’ Union Station into an interactive media installation, Union Station 360°. The experience, which ran from July 15th – 24th, was the first in a series of free art events and concerts intended to revamp the 1939 transit hub into a public destination.

THG was approached by LAMTA with the challenge of designing an immersive, media-driven event that would entice and attract local visitors to Union Station and increase awareness of this unique Los Angeles landmark. The experience THG created included two exciting, iconic installations. On the station’s south patio, a large, touch-sensitive, interactive projection sphere combined with a projection canopy overhead to celebrate Union Station and the entire transit system as a connecting force within one of the most sprawling and diverse cities in the world. THG also installed giant projection screens within the archways of the arcade leading to the patio. When guests stepped on interactive circles on the floor, the media on the screens reacted—changing from everyday shots of passengers circulating through the interior of Union Station to head-on shots of oncoming trains that appeared as if they would blast through the screens.

Phil Hettema, the Founder and Creative Director of The Hettema Group said Union Station 360° “uses both visual and sensory aspects in sort of unconventional ways.” Hettema noted, “We’re projecting on walls and arches. We actually have a large translucent screen floating in the air that images will project onto. We’re not only expanding the media into the space, we’re doing it above you and below you.”

Union Station 360° completed its final show on July 24, 2016 at midnight. The event was a huge success, attracting large crowds with its imaginative vignettes that explored the city’s rich past and vibrant present.

When conceptualizing any new guest experience, The Hettema Group begins the process with a series of brainstorming sessions, or charrettes. The brainstorming process for the media-heavy Union Station 360° project included a team of media producers, interactive directors, writers, graphic designers, creative directors, filmmakers and digital artists. THG developed a concept for the overall guest experience and, once the design was finalized, undertook the procurement of necessary equipment, media production, installation, commissioning and operation of the experience.

In addition to Union Station 360°, iconic THG projects include the One World Observatory at the World Trade Center in New York, New York; The High Roller, the world’s largest observation wheel, in Las Vegas; Beyond All Boundaries, the award winning 4-D visitor experience at The National WWII Museum in New Orleans; and the USA Pavilion at the World Expo 2012 in South Korea.

The THG team consists of experienced designers, architects, media producers, illustrators, master planners, engineers, technical designers and project managers, with decades of cumulative experience across a wide variety of disciplines. Under the guidance of Phil Hettema, THG works on a broad range of projects from theme parks and media-based attractions to large-scale parades and live events, museums and master planned destination resorts, including retail, dining and entertainment.

Joe Kleimanhttp://wwww.themedreality.com
Raised in San Diego on theme parks, zoos, and IMAX films, InPark's Senior Correspondent Joe Kleiman would expand his childhood loves into two decades as a projectionist and theater director within the giant screen industry. In addition to his work in commercial and museum operations, Joe has volunteered his time to animal husbandry at leading facilities in California and Texas and has played a leading management role for a number of performing arts companies. Joe previously served as News Editor and has remained a contributing author to InPark Magazine since 2011. HIs writing has also appeared in Sound & Communications, LF Examiner, Jim Hill Media, The Planetarian, Behind the Thrills, and MiceChat His blog, ThemedReality.com takes an unconventional look at the attractions industry. Follow on twitter @ThemesRenewed Joe lives in Sacramento, California with his wife, dog, and a ghost.
Share
Facebook
Twitter
Linkedin
Email
Print
WhatsApp
Pinterest
ReddIt
Tumblr
Previous articleSt Louis Union Station Overhaul to Add Million Gallon Aquarium
Next articleSky Trail Ropes Course Opens at Drayton Manor