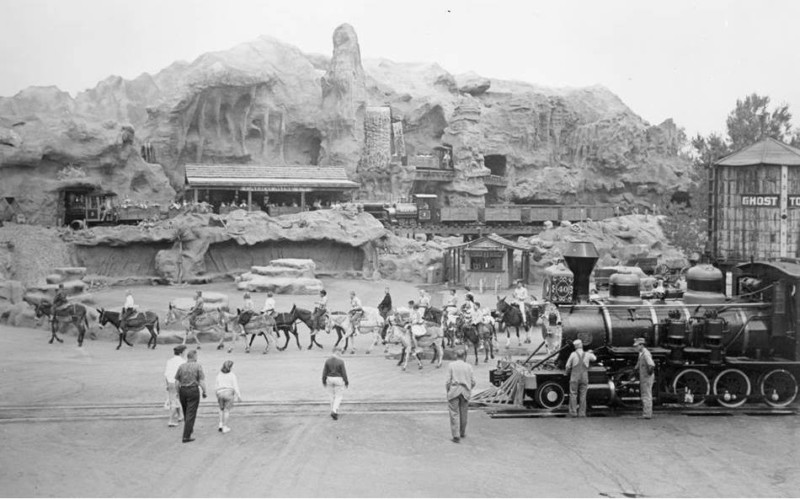 [quote]The updated script includes references to a number of real historic mining practices and personalities. The on-board audio narrator will also interact with animatronics and special effects in some scenes.” — Garner Holt[/quote]

Buena Park, CA, USA (May 1, 2014) — Knott’s Berry Farm announced today that the Calico Mine Ride will reopen on June 14, 2014.  The top-to-bottom refurbishment began in early January and includes dozens of new richly-detailed animatronic figures, state-of-the art lighting, audio, and all-new special effects. When the classic railroad adventure reopens in June, passengers will embark on the most immersive mining journeys the “Calico Mining Company” has ever offered.

The basis of the iconic attraction was a simple handshake agreement between Knott’s founder, Walter Knott, and theme park pioneer Bud Hurlbut in 1959. From that handshake emerged a first-of-its-kind “dark ride” with elaborate show scenes and full-sized human figures. The attraction was an instant hit with guests at its original November 22, 1960 opening, and earned back Hurlbut’s initial $1 million investment in less than two years. The groundbreaking attraction had a special place in Walter Knott’s heart, who worked in actual mines around the turn of the century in the Calico mining region of San Bernardino County before calling Buena Park home. Hurlbut worked tirelessly to incorporate authentic touches into the attraction. For the real stories of men who worked in the frequently dangerous mining world, he befriended actual miners and visited dozens of mining sites around California to observe the workmen, their tools and environment. 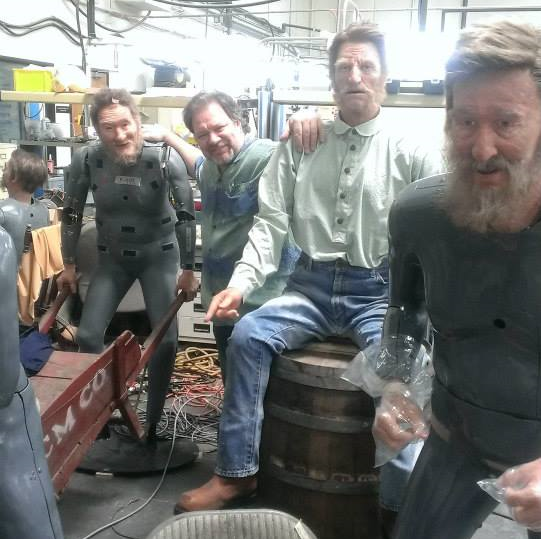 Knott’s Berry Farm’s Design Team, in partnership with Garner Holt Productions, Inc., has elevated Hurlbut’s 1960 design while preserving the original mining experience. Nearly fifty animatronic humans and dozens more animals populate the updated adventure, with more than 120 characters spread through classic and re-imagined scenes. New denizens of the mountain include an old miner just inside the first tunnel who will welcome guests into the Calico Mine and warn them of dangers that lie along the rails ahead. Despite the massive mining operation depicted inside the Calico Mine, since the attraction first opened, no character has ever actually found gold in the mountain. As part of the renovation, beginning June 14, one lucky miner will be seen striking it rich with gold in-hand.

New excitement is also coming to the “chain lift”, where trains will pass by a nervous miner carrying a canary in a cage for safety into the unknown diggings ahead. The animatronic canary is just one of many new animals coming to the attraction. Other wildlife will include a donkey, vultures, a playful dog, countless bats, and blind fish in the eerie Lake Room.

The attraction’s rustic wooden loading platform has been refreshed and now includes a “peek-in” similar to those found throughout Ghost Town, offering guests windows into the rich mining history of the 1850s on their way toward boarding the mine train car. A new guest and employee elevator has been installed to improve access to the attraction, especially for guests seeking ADA accommodations.

Guests will soon embark on the eight minute journey aboard fully refurbished, hand painted mining cars featuring new speakers and a digital amplification system, pulled by beautifully-detailed locomotives. Garner Holt Productions, Inc. installed a cutting-edge RFID playback system in the ride vehicles to play the all-new on-ride narration and audio effects through the crystal-clear digital system. “The spiel is based on the original 1960 script, and will have all-new points of interest and stories in the voices of three all-new character narrators so that each trip through the Mine will be unique,” explains Garner Holt, founder and president of the San Bernardino based Garner Holt Productions, Inc.

The twisting, turning tunnels and expansive caverns were completely repainted, including a brilliant new color scheme in the spectacular “Heaven Room.” Here, guests will thrill to the glorious sight of the thousands of spectacular stalagmite and stalactites accompanied by the original musical score, which has been digitally re-recorded. Original special effects have been lovingly re-created, like real steam in the Bubbling Pots scene with its surprising steam geyser and tipping barrels and other effects in the Explosion Room finale.

The Calico Mine Ride was a 1998 recipient of the Thea Award for Outstanding Classic Attraction, presented by the Themed Entertainment Association.

Also celebrating its grand reopening on June 14 is a fresh Camp Snoopy, featuring three new rides and exciting surprises around every corner of the high sierra playground for kids and families.

Joe Kleimanhttp://wwww.themedreality.com
Raised in San Diego on theme parks, zoos, and IMAX films, Joe Kleiman would expand his childhood loves into two decades as a projectionist and theater director within the giant screen industry. In addition to his work in commercial and museum operations, Joe has volunteered his time to animal husbandry at leading facilities in California and Texas and has played a leading management role for a number of performing arts companies. Joe has been News Editor and contributing author to InPark Magazine since 2011. HIs writing has also appeared in Sound & Communications, LF Examiner, Jim Hill Media, and MiceChat. His blog, ThemedReality.com takes an unconventional look at the attractions industry. Follow on twitter @ThemesRenewed Joe lives in Sacramento, California with his fiancé, two dogs, and a ghost.
Share
Facebook
Twitter
Linkedin
Email
Print
WhatsApp
Pinterest
ReddIt
Tumblr
Previous articleEntertainment Management Group Installs Major Rides for Six Flags
Next articleMyMagic+ revealed to Walt Disney World guests