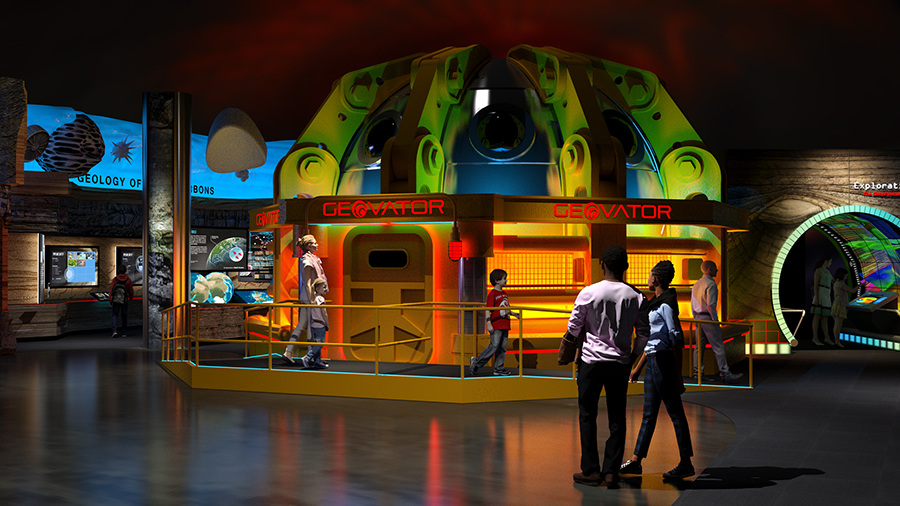 NOTE: Wiess Energy Hall 3.0 was designed by Paul Bernhard Exhibit Design of Austin, TX in conjunction with the Houston Museum of Natural Science.  This is the third version of the exhibit the two have collaborated on.  For the first time, the Geovator and Eagle Ford exhibits will feature complete motion simulation, with one-of-a-kind pneumatic motion bases and control systems designed and built by The Attraction Services Company (TASC), a specialist in mechanical and other effects for theme parks, museums, and events.  Click the link below for a profile of TASC and an interview with its founder Ron Griffin.

For more than two decades, millions and millions of visitors of all ages have immersed themselves in the science of energy by exploring the Wiess Energy Hall, one of the Houston Museum of Natural Science’s most popular exhibitions.  In recent years, the science of energy has become even more highly advanced than it already was, as has the exhibition technology available to effectively tell that story. Because of the museum’s commitment to exploring cutting edge science, and enhancing the visitor experience, a greatly expanded version of the Wiess Energy Hall is set to open in November 2017.

Dubbed Wiess Energy Hall 3.0, the third iteration of this popular hall will enlarge from its previous 8,500 square feet to an expansive 30,000 square feet–almost the size of a football field. Joining the completely redesigned “classic” displays will be entirely new exhibits, making the new hall the most contemporary, comprehensive, and technologically advanced exhibition on the science and technology of energy.

Entering the new Wiess Energy Hall, visitors will step off of the elevator into a realistic environment depicting the dynamic floor of a working, 21st century offshore drilling rig populated by a crew of robots—an automated top-drive mechanism, pipe racker, and iron roughneck. A projection of the offshore surroundings, authentic sound effects, and dramatic lighting enhance the realism of this scene.

Near the center of the cavernous new hall, a giant replica of a tricone rotary drill bit—fourteen feet in diameter—spins overhead. Below the massive instrument, visitors can stand over the huge hole the bit has drilled, which appears to plunge into darkness at its vanishing point far below.

Not far away, the completely reinvented Geovator, now hosted by a holographic pilot, takes visitors on a reimagined fantastic voyage plunging down through the museum floors into the earth, then back in time to the Cretaceous Period for an attack by hungry pteranodons and a meteor strike, and finally a tumultuous ascent to the surface for a surprising conclusion.

No 21st century energy exhibition would be complete without addressing the changes brought about by newly accessible unconventional hydrocarbon energy. Wiess Energy Hall 3.0 will feature a sizable new gallery called The Unconventional Hydrocarbon Revolution that will enlighten visitors on how shale oil and shale gas have transformed the U.S. energy picture. Other parts of the exhibition will offer the chance to discover how additional “unconventional” hydrocarbon forms, including heavy oil, oil shale, coal bed methane, and even gas hydrates, are changing for the better not only the U.S. energy outlook, but also that of the entire world. 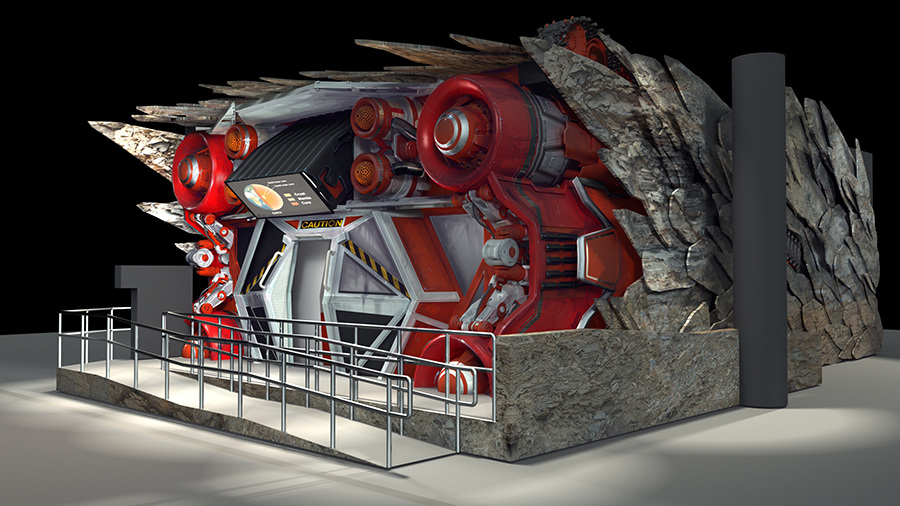 Adjacent to the Unconventional Resources Gallery, the mammoth presence of the Eagle Ford Shale Experience, a.k.a. the EFX 3000 (above photo), beckons visitors to step aboard for a wild ride out to prime Texas shale oil and gas drilling country and down into the borehole of an oil well, made real with curved projection techniques and mechanical motion effects. Reduced to microscopic size, the craft ventures into the narrow spaces of a hydraulic micro-fracture, surrounded by seemingly massive grains of proppant. Things may get a little dodgy for a bit, but the EFX makes a safe return to the museum.

A vast island in the center of the Wiess Energy Hall with a unique Möbius strip-inspired design invites guests to delve into the growing importance of renewable energy sources, as well as experimental and cutting-edge technology happening right now—and into the future. Highlights include a detailed exploration of solar energy and wind energy, two sources in which Texas is a national leader, as well as various forms of ocean energy, fuel cells, geothermal energy, and of course fusion power—which will radically transform the world energy outlook when it can be successfully exploited.

Joe Kleimanhttp://wwww.themedreality.com
Raised in San Diego on theme parks, zoos, and IMAX films, InPark's Senior Correspondent Joe Kleiman would expand his childhood loves into two decades as a projectionist and theater director within the giant screen industry. In addition to his work in commercial and museum operations, Joe has volunteered his time to animal husbandry at leading facilities in California and Texas and has played a leading management role for a number of performing arts companies. Joe previously served as News Editor and has remained a contributing author to InPark Magazine since 2011. HIs writing has also appeared in Sound & Communications, LF Examiner, Jim Hill Media, The Planetarian, Behind the Thrills, and MiceChat His blog, ThemedReality.com takes an unconventional look at the attractions industry. Follow on twitter @ThemesRenewed Joe lives in Sacramento, California with his wife, dog, and a ghost.
Share
Facebook
Twitter
Linkedin
Email
Print
WhatsApp
Pinterest
ReddIt
Tumblr
Previous articleNew Story-Intensive Water Ride to Open at Disney World’s Typhoon Lagoon
Next articleKalahari Poconos Now Home to Largest Indoor Waterpark in USA