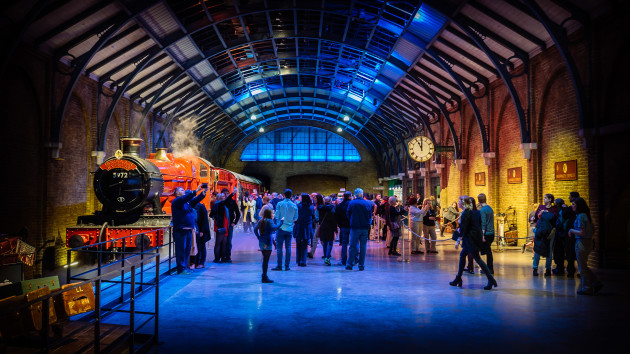 Burbank, CA, USA (Apr. 6, 2015) — Thinkwell Group, a worldwide experience design and production agency specializing in the creation of theme parks, major attractions, events, museums, exhibits, expos, and live shows around the world, today announced its involvement in designing and producing the expansion for the award-winning behind the scenes attraction at Warner Bros. Studios Leavesden.

The new permanent expansion includes the original Hogwarts Express steam engine (antique British steam train No. 5972 “Olton Hall” built in 1937) and a recreation of Platform 9 ¾ set from the Harry Potter film series. Guests will have the opportunity to climb aboard the iconic train and pose with a luggage trolley as it disappears through the platform wall, along with other interactives.

“We are extremely honored to continue our collaboration with Warner Bros. Studio Tour London: The Making of Harry Potter,” said Craig Hanna, chief creative officer for Thinkwell Group. “Working with Warner Bros., production designer of the Harry Potter films Stuart Craig, and the team at Leavesden is an incredibly rewarding experience.”

Thinkwell collaborated with Warner Bros. on Warner Bros. Studio Tour London: The Making of Harry Potter, which opened in 2012, to create a one-of-a-kind attraction which explores the art and craftsmanship that went into the creation of the Harry Potter film series at the very studio where the movies were  filmed for over a decade. Featuring dozens of original sets, and hundreds of authentic costumes and props, this immersive experience showcases the exceptional creativity and craftsmanship that brought the films to life, and goes far beyond behind the scenes with an award-winning handheld Digital Guide, and over 100 minutes of original media featuring the cast and crew produced specifically for the attraction.

Joe Kleimanhttp://wwww.themedreality.com
Raised in San Diego on theme parks, zoos, and IMAX films, InPark's Senior Correspondent Joe Kleiman would expand his childhood loves into two decades as a projectionist and theater director within the giant screen industry. In addition to his work in commercial and museum operations, Joe has volunteered his time to animal husbandry at leading facilities in California and Texas and has played a leading management role for a number of performing arts companies. Joe previously served as News Editor and has remained a contributing author to InPark Magazine since 2011. HIs writing has also appeared in Sound & Communications, LF Examiner, Jim Hill Media, The Planetarian, Behind the Thrills, and MiceChat His blog, ThemedReality.com takes an unconventional look at the attractions industry. Follow on twitter @ThemesRenewed Joe lives in Sacramento, California with his wife, dog, and a ghost.
Share
Facebook
Twitter
Linkedin
Email
Print
WhatsApp
Pinterest
ReddIt
Tumblr
Previous articleECA2 Creates World’s First Waterfall Theatre Celebrating Natural Magic of Wuyishan
Next article2015 Geekout at InfoComm Seeks Case Study Submissions